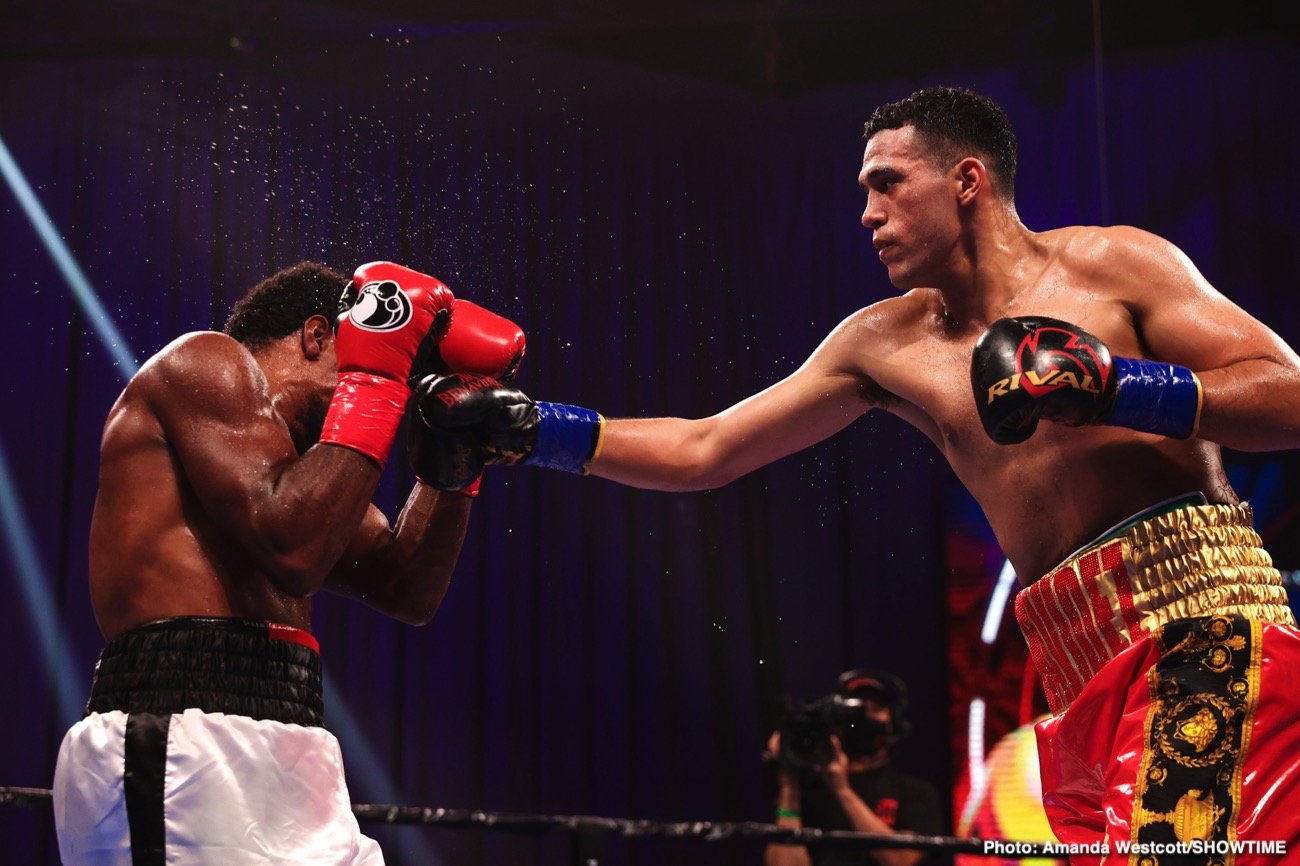 Benavidez vs. Angulo was televised on Showtime Boxing.

In the 10th round, Benavidez teed off on Angulo, hitting him with everything but the kitchen sink. Surprisingly, referee Johnny Callas let the round proceed without stepping in to halt the fight. At the end of the 10th, Angulo’s corner pulled him out of the fight.

The WBC 168lb title was only on the line tonight for the 36-year-old Angulo due to Benavidez having missed weight by close to three pounds by weighing in at 170 3/4 pounds instead of 168, which is the upper weight limit for the division.

Benavidez, 23, rehydrated overnight after the weigh-in and looked like a cruiserweight tonight in beating up the much smaller Angulo.

Tonight’s fight was expected to be a mismatch, as Angulo is ranked at the bottom of the World Boxing Council’s rankings at #15, and he’d badly beaten easily beaten by former WBO 168-lb Champion Gilberto ‘Zurdo’ Ramirez in a lopsided 12 round decision in 2018.

Benavidez beat Angulo like a drum and did pretty much the same thing ss Ramirez did in 2018.

After the fight, Benavidez said, “I want to fight for another world title if that’s possible. I’ve got to be a lot more strict with my diet so I can make weight. The things I did against Angulo, I won’t have to do against [Caleb] Plant.

“I was more of the boxer in this fight. Against Plant, I would have to cut the ring off way more and do more stuff. I don’t think he’s going to be in there trying to brawl with me,” said Benavidez.

“I’m still looking forward to a fight against him. I hope I can get a fight with him. He can say whatever he wants. I think he’s going to be hoping and praying that I don’t make 168 so I don’t have to fight him, but I’m definitely going to be making 168 for him,” Benavidez added.

“If I fight anybody for their title and I look like this, I’m going to beat them. The only way they can beat me and I can lose my title is if I don’t make weight.

“They should be scared of that. The only way I don’t win a belt is if I don’t make weight.

“All you guys talking, you better hope that I never see any of you guys inside the ring because this is exactly what I’ll do to anybody,” said Benavidez in sounding like he’s making a threat to his critics.

“What other super middleweights do that,” said Benavidez. “All those jabs were like power shots. What other brawler wins rounds like that? I’m 23-years-old.

“This guy [Angulo] had never been stopped. He just upset Anthony Sims, and he gave Zurdo Ramirez a hell of a fight [editor’s note: Ramirez easily beat Angulo by a one-sided 12 round unanimous decision in 2018.

“The fight was not competitive in the least]. I dominated him from round one to round eleven. I’m barely 23-years-old. You can say what you want to say, but I’m a great fighter. I keep proving that. I’m not going to stop until I’m the best in this generation,” Benavidez continued.

“We have to go back to the drawing board and see because it’s going to be a bigger fight if its a unification fight,” said Benavidez about a match between him and IBF super-middleweight champion Caleb Plant.

“If I have to go back to that line and put myself back in place for that title, that’s exactly what I’m going to do. It doesn’t matter to me if I fight him for a title or not. The only thing that I want is get my hands on him.

That’s all I want to do. If it’s for a title or not for a title, it doesn’t matter to me. It’s definitely going to be a bigger fight if I have a title, but I just want to get my hands on him.

“They have their mandatory for that. [Caleb] Truax and [Alfredo] Angulo will be fighting for that [IBF 168-lb title eliminator]. For someone to say that I’m not disciplined inside the ring is very disrespectful.

“The only thing I wasn’t disciplined was making the weight, and that was only three pounds. But as you saw in the fight, I showed defense, distance, power shots, jabs.

“I literally showed everything in the ring, and I didn’t even get tired and I was going into the 11th round,” said Benavidez.

“I’m definitely going to give it one more try,” said Benavidez about him looking to make 168 one more time. “I’m going to clean myself up some more, and my diet. I thought my diet was already solid.

We’re definitely going to come more prepared next time. People are judging me, making it seem like I’m a super undisciplined fighter because I missed weight one time. It’s unfair but I’m definitely coming back to 168,” said Benavidez.

“I never get discouraged. These are grown men, and I’m 23. He’s 35,” said Benavidez when asked if he was getting discouraged that it took him so long to stop the 36-year-old Angulo.

“I was going to proceed and keep attacking him, throwing good combinations and hurting him. I was trying to hurt him as much as I can, and you saw what happened. I was surprised they stopped the fight. I felt I was going to knock him out and stop him

“It was a matter of time. There were only two rounds left, but I felt like I was going to pull it off. These Hispanic dudes are tough. It doesn’t matter if he’s Mexican, Colombian.

“They’re tough. It’s most likely they’re going to go out on their shields. I want to fight in December or January. I’m not going to turn down a payday. Before this, I didn’t fight for a year.

“I want to fight at least two times a year. I feel like I’m too young to be fighting one time a year. I’m going to talk to my promoters. If I can get a fight in before the end of the year in January, that would be perfect,” said Benavidez.

The 34-year-old Kauffman, who had lost two out of his last three fights coming into tonight’s contest against the 29-year-old Swedish heavyweight Wallin, injured his shoulder and couldn’t continue in the fifth round. The time of the stoppage was at 2:32 of round five.

Kaufman was a one-armed fighter due to a shoulder injury, so the fight had to be stopped because it was no longer competitive after two rounds.

The 6’5 1/2″ Wallin was fighting for the first since losing to Tyson Fury by a 12 round decision last September in Las Vegas, Nevada.

Wallin dominated the shorter fighter Kauffman from the opening round and had little problems with his offensive firepower, which was low.