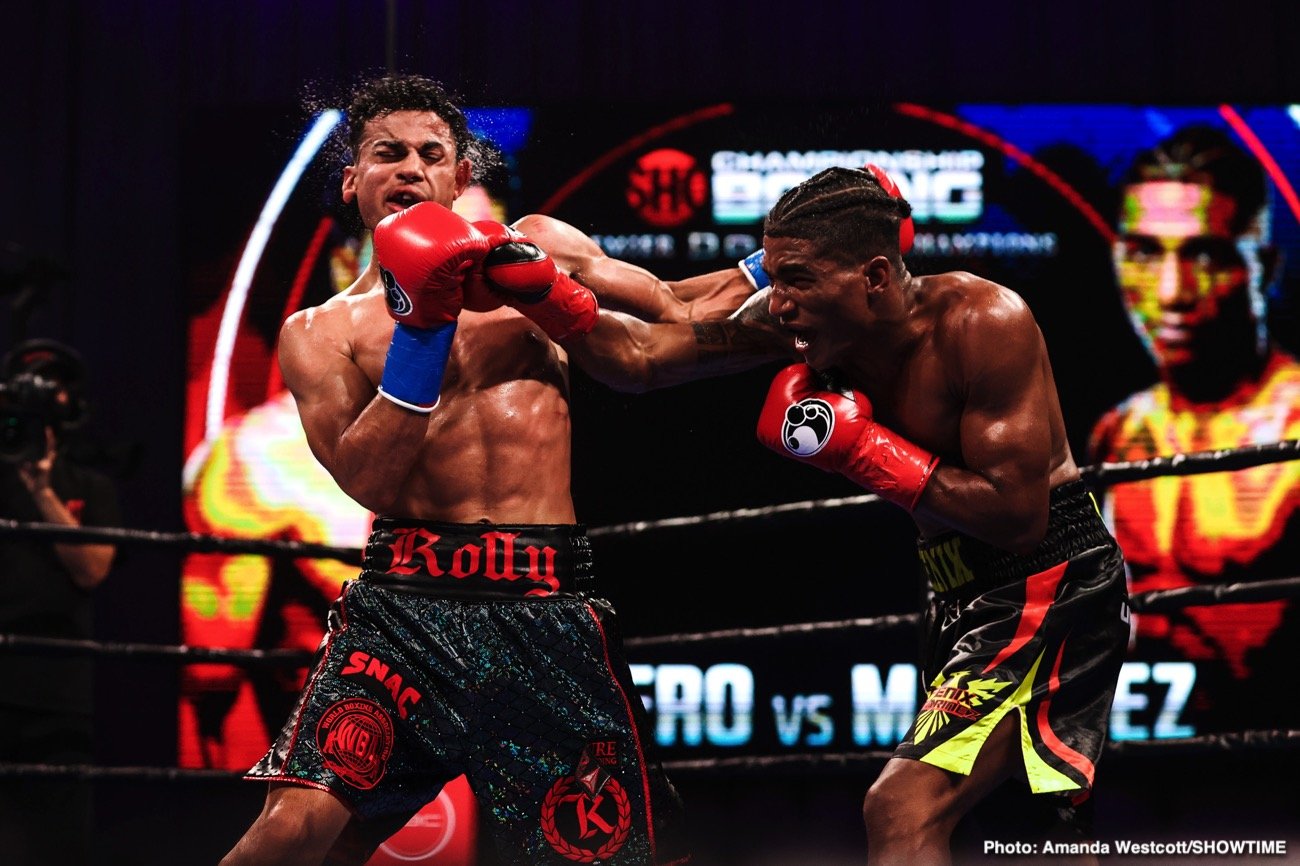 By Kenneth Friedman: In a controversial fight, Rolando ‘Rolly’ Romero (12-0, 10 Kos) defeated previously unbeaten Jackson Maríñez (19-1, 7 KOs) by a 12 round unanimous decision to capture the interim WBA lightweight title on Saturday night at the Mohegan Sun Casino in Uncasville. Connecticut.

Rolly’s promoters need to think seriously about setting up a rematch with Maríñez because there’s too much controversy over Rolly’s win tonight. It’s going to hurt his reputation permanently unless he faces Maríñez again and clears up the discussion.

He looked like the better fighter with better boxing skills, power, and talent. Maríñez wasn’t making a lot of noise each time he would throw a punch the way Romero, but he appeared to land the better shots throughout the contest.

The Mayweather promoted Rolly loaded up with everything he threw and made a lot of noise with each punch, and it did not affect him.

Golden Boy Promotions Oscar De La Hoya wasn’t impressed with what he saw from Romero, and he took to social media afterward to say he was “ashamed” that Rolly felt he won the fight. De La Hoya says he wants his fighter unbeaten lightweight Ryan Garcia to forget about Romero.

Rolly has done a lot of trash-talking about wanting to fight Ryan, but it doesn’t look like that’s going to happen.

As a fighter my self, I am ashamed of this Roller guy if he thinks he won. @KingRyanG forget about this clown we have bigger fish to fry.

It’s unclear what the end game is for the promoters for Romero. With him winning the interim WBA 135-lb title, he’s now in a position to challenge either WBA ‘regular’ lightweight champion Gervonta ‘Tank’ Davis or WBA Super World champ Vasily Lomachenko.

Romero isn’t good enough to beat Lomachenko or Tank Davis, and he could get hurt fighting either of those guys. If Rolly’s promoters are looking for a big payday for him against Lomachenko or Tank, then they’ll succeed, but he’s not going to beat either of them, even with the judges that worked tonight’s fight.

Loma and Tank would embarrass Romero, and the judges wouldn’t likely get a chance to score the match.

The promoters for Romero can’t force Ryan Garcia to fight him so that they can forget about that. Romero’s best chance of making money is to take on WBA regular lightweight champion Tank Davis in a year or two and enjoy the payday. It’s unrealistic to see Romero doing well against Tank Davis or Loma.