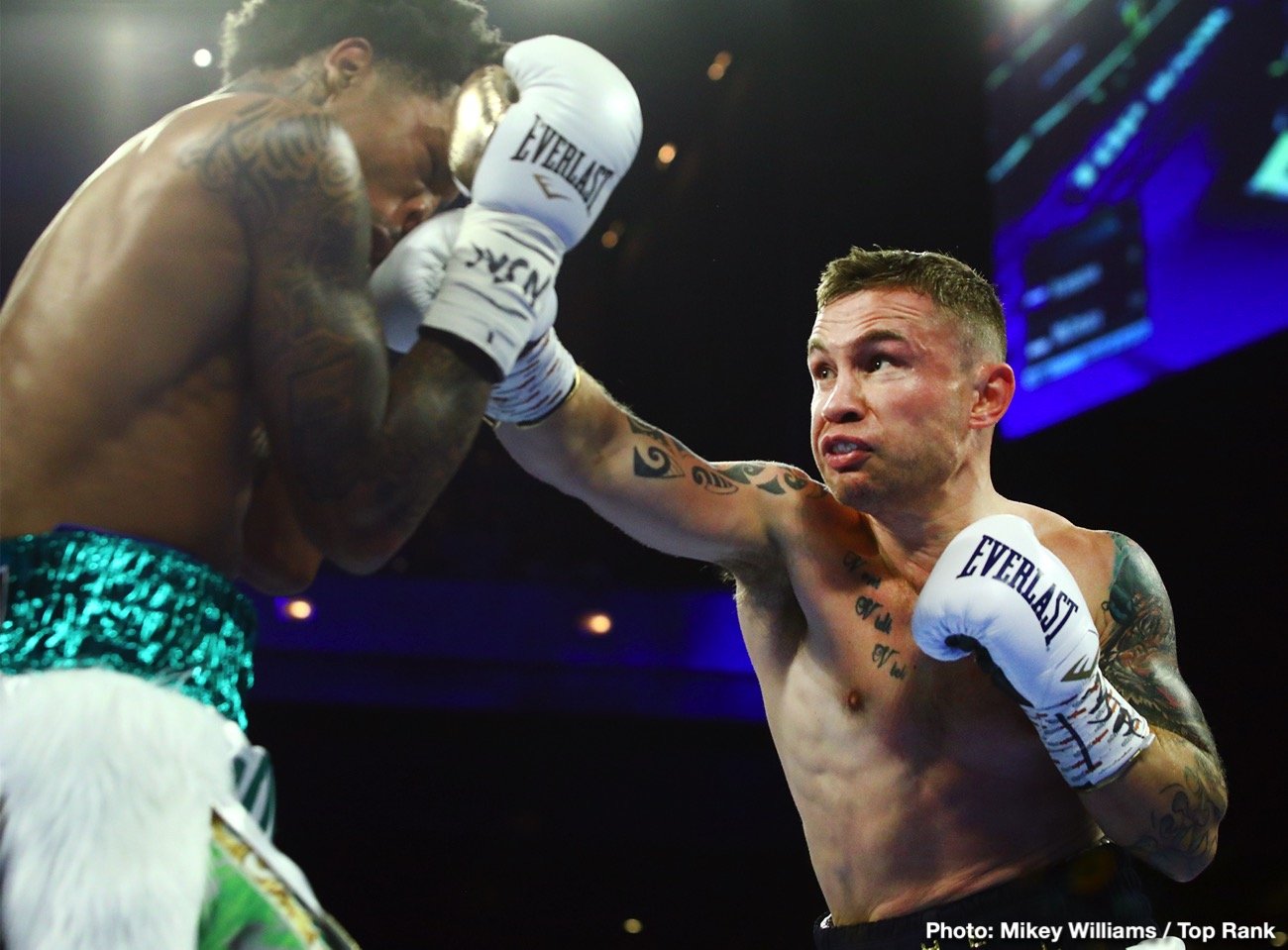 By Kenneth Friedman: Carl ‘The Jackal’ Frampton is fighting Vahram Vardanyan, and Michael Conlan is taking on Sofiane Takoucht on August 15 at the BT Sport Studio in London, England. Both fights are scheduled for ten rounds. Both of these fights will be shown on ESPN and ESPN Deportes at 4 pm ET/1 pm PT.

The former two-division world champion Frampton (27-2, 15 KOs) is headlining in a stay busy fight to get him ready for a title shot against WBO super featherweight champion Jamel Herring. Carl, 33, and Vardanyan are scheduled for 10 rounds, but it’s likely to end much sooner.

Vardanyan has never fought at this level, and he’s going to have to learn on the job on August 15. You don’t like to see novice fighters like Vardanyan thrown in the deep end like we’ll be seeing against Frampton, but he agreed to take the fight.

The Northern Ireland native Frampton has a lot more experience against world-class opposition than the 31-year-old Vardanyan, who has never fought a top 15 opponent before. In 2016, Vardanyan (21-1-1, 14 KOs) lost an eight-round decision to Alexander Saltykov (12-59-3, 7 KOs), which gives you a good idea of the type of talent he has.

It’s a little surprising that Frampton’s promoters at Top Rank chose to match him against such a poor opponent in Vardanyan, but perhaps this is all they could get? But as long as the fight is sanctioned, which you can argue that it really shouldn’t, it’ll go ahead for August 15. Frampton is capable of beating much better than Vardanyan. 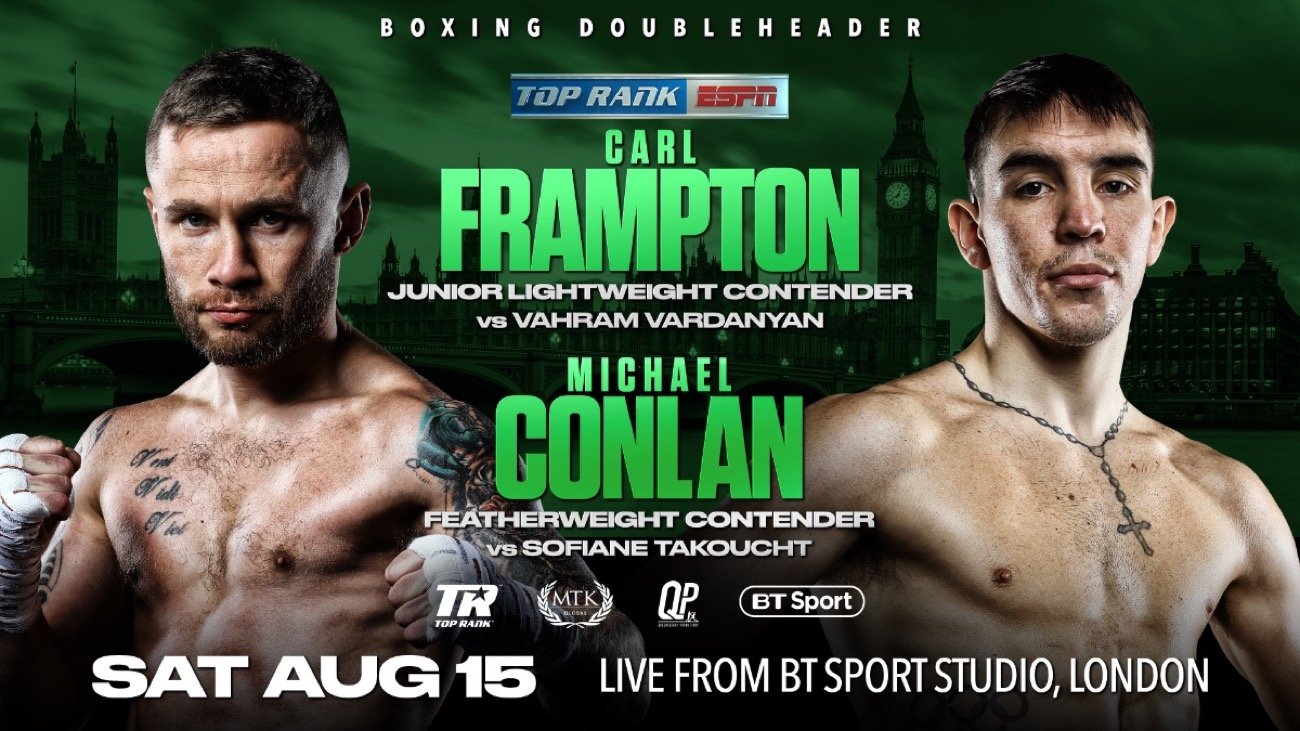 “Hopefully, I get the win here, and then we can have the Herring fight for the world title later this year or in early 2021,” said Frampton.

For Frampton, this will be his second consecutive tune-up level soft fight. In Carl’s last bout, he defeated little known Tyler McCreary (16-1-1, 7 KOs) on November 30 in his debut at super featherweight in Las Vegas, Nevada.

Frampton will be in search of his second consecutive win since losing to IBF featherweight champion Josh Warrington by a 12 round decision in December 2018.

Carl blames his loss to Warrington on his struggles to make the 126-lb weigh-in limit, but it looked like Josh’s work-rate was better than anyone Frampton had ever seen before.

He’s always struggled during his career when fighting guys that were busy, and forced him into fights where he had to defend a lot. We saw that in Frampton’s contests against Scott Quigg, Horacio Garcia, and Nonito Donaire.

“What a tremendous opportunity for fight fans to see Mick and Carl fight on the same card,” said Bob Arum of Top Rank. “Carl and Mick are closing in on world title opportunities, and I expect spectacular performances from both men.”

Conlan (13-0, 7 KOs) surprisingly passed up an opportunity to challenge for the vacant WBA 126-pound title against Emanuel Navarrete. Instead, Mick will be moving down to 122 to fight for the Navarrete’s recently vacated WBO super bantamweight strap.

It was a good move for the two-time Irish Olympian Conlan to move down to super bantamweight because he would have been over-matched against Navarrete in battling for the WBO 126lb belt. At 122, Conlan will fight one of the top contenders for the vacant WBO belt.

Conlan might have a better shot at winning a world title at super bantamweight because he’s a big guy and his power will be better down there. Assuming Conlan doesn’t lose his strength in coming down to 122, he’s got a better than average shot at winning the WBO belt.

If Conlan can’t make anything happen at 122, he’ll need to decide whether he should continue his career or pack it in. It would be asking too much of Conlan for him to go down to bantamweight if can’t win a belt at 122.

Conlan’s opponent for August 15, Sofiane Takoucht (35-4-1, 13 KOs) was stopped in the second round in a failed title shot against IBF featherweight champion Josh Warrington last October in Leeds. Warrington doesn’t usually blow out his opposition like that, but Takoucht was snowed under by punches from him. 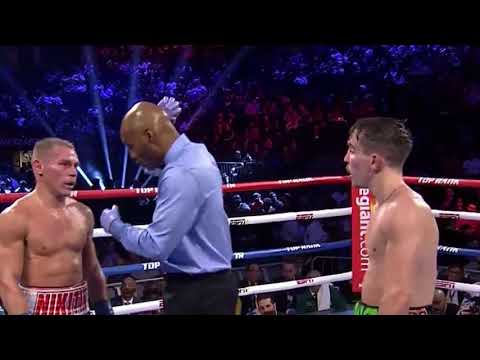 Takoucht’s history of being a slow starter cost him against Warrington, that’s all you can say about that. Had Takoucht started off a lot faster, he probably would have gone the full 12 round. I’m not saying he would have beaten Warrington, but at least he’d have been the final bell.


« Who Will Canelo Alvarez Fight Next?

Fury vs. Joshua – Who wins the heavyweight battle of the century? »