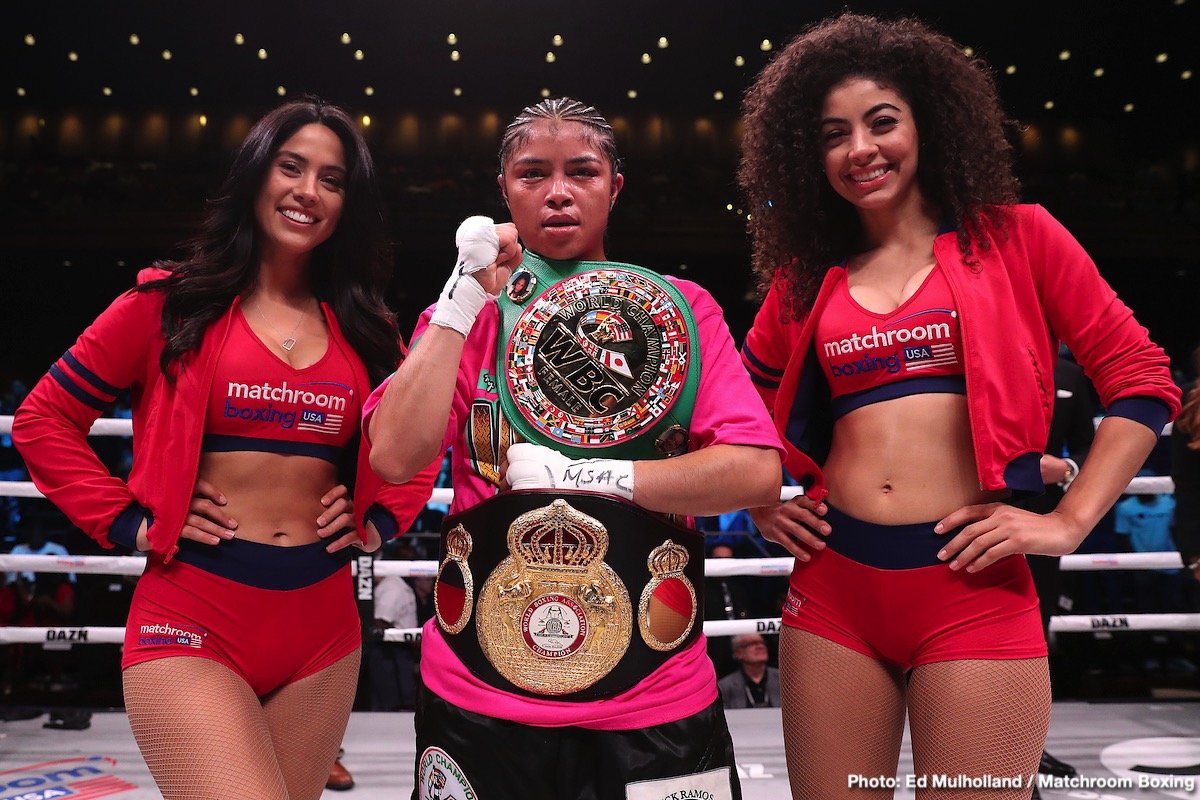 By Ian Aldous: ‘No Days Off’ was the title of a recent video series documenting the life in training camp of Jessica McCaskill (8-2); the phrase is also a way of life for the thirty-five year-old and her manager/trainer, Rick Ramos. Training out of the Body Shot Boxing Club in Chicago, the WBA & WBC super-lightweight World champion is on a collision course with the Undisputed, IBF, IBO, WBA, WBC & WBO welterweight World champion, Cecilia Braekhus. The postponed fight was originally scheduled for April 17th and McCaskill is raring to secure a new date for the fight.

“As far as I know, that is definitely still the plan,” the No.1 super-lightweight in the world told me. “It could even be as early as July. I got a call from Matchroom saying: ‘to be ready and stay ready’. You don’t want to get overlooked for something major like this just because you want to take a vacation. I’ve been in the gym every day for multiple workouts and I can’t wait to show what we’ve been working on.”

McCaskill and Ramos are using the postponement as a positive. What some may see as a break and a time to slack; they see as more time to put in added hard graft to capture the IBF, IBO, WBA, WBC, WBO and The Ring welterweight World championships.

“I’m just looking to make history and shock the world as I usually do every time. I’m expecting to knock out Cecilia. I don’t know what round, but this extra time we’ve got to train before the fight is definitely going to make us a lot sharper and a lot stronger and smarter overall.”

The previously mentioned ‘No Days Off’ series has shown the tandem of McCaskill and Ramos to be workhorses willing to do whatever it takes to succeed. McCaskill even sets up her own makeshift office in the gym to carry out her full-time job. She’s rarely ever away from the squared circle and her team.

“It’s very helpful to have that tight-knit community and that family in-house,” she explained. “That way you don’t have to really rely on the consistency of other people or the ability of other people. We are very much the type to fly people in if needed to make sure we have other professionals or national amateur champions to come in and we pay them for rounds, but amongst quarantine and things like that, people have reservations about coming in. So when you have that close-knit community amongst quarantine restrictions – you can still work and build in-house and that’s what we’re doing.”

With the Braekhus fight almost certain to be staged behind closed doors, the lack of atmosphere will be in stark contrast to the night McCaskill won her first world title against Erica Farias, on home turf at the Wintrust Arena in Chicago back in 2018. But she assures me that won’t be a problem.

“It’s definitely energizing to have all your work comrades and friends and family in the crowd,” she proudly recollected. “They’re very vocal, it’s Chicago, they’re going to give you a piece of their mind one way or the other (laughs)! To get that support is such a good feeling and I know they’ll be supporting through the DAZN network. We know the community is still behind us and we’re very thankful for that. As far as being behind closed doors, I think it’ll be very intense in comparison to having a crowd because I think the crowd can be a bit of a distraction, not necessarily in a bad way, but every once in a while the crowd hits your mind. You’re always listening for your coach’s voice when you’re fighting, so I think it’ll be much easier to hear him and his instruction. I think it’ll be really concentrated and very intimate. I don’t think it’s going to be a negative thing at all.”

Jessica McCaskill unified the WBA crown with her WBC belt in the subsequent bout before defending both titles late last year. She’s been on an excellent run of three wins against credible opponents possessing excellent records since tasting defeat against the double-Olympic champion, Katie Taylor in 2017. Keep in mind that she didn’t lace up a glove until her mid-twenties and this was only her seventh pro contest, yet the Chicago fighter gave Taylor one of her toughest nights to date.

“My coach says it’s probably a good thing we didn’t win that fight because if we crushed Matchroom’s (top) female; I don’t think they would have put money into female boxing,” she mused. “Because it was such a good fight and because we brought it to her and we showed we weren’t fazed – that was something that really escalated the drive for females to participate and for promoters to want to bring on female fighters.”

The champion continued, “Me having twenty-five amateur fights and her having maybe a couple hundred, I’m not (exactly) sure? It just shows that I do belong at this level of professional boxing. Since Katie, we’ve always fought people where I was the underdog and we’ve been very successful.”

Recently, two-time Olympic champion and three-weight world titleholder, Claressa Shields has been advocating for female boxing to begin utilising three-minute rounds as opposed to two-minute rounds. Some, including myself, believe that shorter rounds create faster-paced action thus creating excitement. It’s sparked debate amongst the sport and is a topic that I put to McCaskill.

“It is very important to look out for the health of the fighters. There’s people who don’t make it out of the ring and that’s something that should be looked at when it comes to how they’re training and what their diet looks like and even things like three-minute rounds for females. If it’s something that shouldn’t be done, or should be tested or two-and-a-half minute rounds or three minute rounds and less rounds – as soon as they figure it out then we’re on board.”

“A lot of females do have exciting fights and I don’t know if it’s because of the two-minute rounds but there is a sense of urgency when you only have two minutes to show the crowd that you’re exciting.”