Eddie Hearn “Hello and welcome to Dallas ahead of a huge night of boxing from the American Airlines Center this Saturday, live and exclusive on DAZN all across the world. No travel restrictions, no pandemic can stop us from being here. I’ve not been this excited about a card for a long time. (Photo credit: Ed Mulholland/Matchroom) 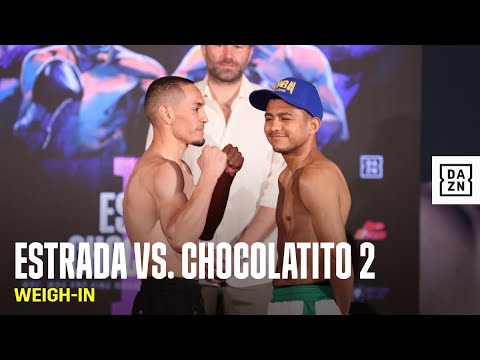 “Of course, the World championships triple-header on the card. So many young prospects stepping up as well, and 11 World championship belts on the line, three-ring magazine titles on the line on this card. I thought it was a first, but someone just told me that Don King did it 18 years ago, so we will not talk too much about that, but what a card.

“What the main event, of course, the rematch of Estrada v Chocolatito for the WBA, WBC, and Ring Magazine championships. A rematch of their first epic battle over eight years ago now.

And a fantastic co-main event, the undisputed women’s World Welterweight championship between Jessica McCaskill and Cecilia Braekhus and of course the Light-Flyweight championship of the World and Ring Magazine belts between Kyoguchi and Vera.”

“I’ve been waiting for this fight for almost nine years; I’ve been ready for the opportunity. He’s a good champ, he’s a good fighter, and may the best man win.

“We waited a long time; I have three losses, and I’ve already avenged two of them, but we train really hard, and I’m ready for this fight.

“This is going to be better than the first one. It’s going to be a war, and the people watching will be the real winners.

“Without a doubt, it’s a fight that we have all been waiting for for a long time. There is a lot of expectation; it’s been nine years in the making. People would always ask when we would fight again. It’s going to be exciting, and I’m concentrating on giving a good fight this Saturday.” 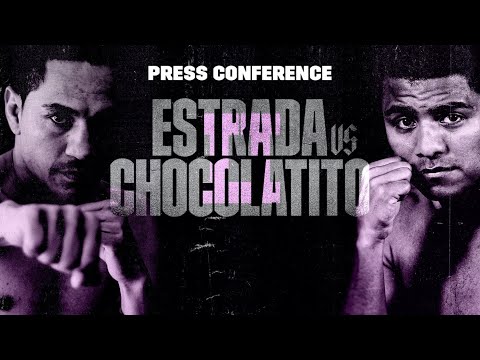 “First of all, God bless everyone; I’m delighted; God and DAZN and Mr. Honda bless me, we’ve done a perfect camp, and we are ready for this fight.

“I’m very conscious it’s going to be a beautiful fight. Juan is a good champion, and we know what we have to do. We want to give a good fight for everyone to watch.

“I think it’s an important fight, not just for Nicaragua, but also for Mexico. I think both countries will be paralyzed on Saturday watching these fights, and hopefully, we have a good fight. We can go back home to our families, and may the best man win.” 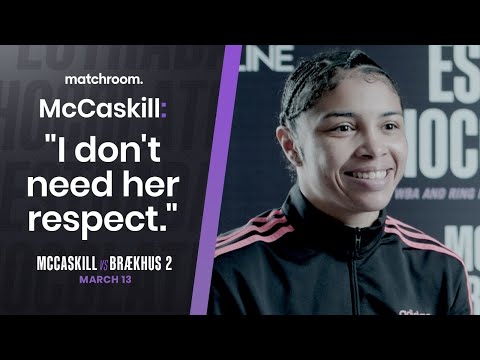 “I’m so ready to punch Cecilia in the face. I mean, as we said, I don’t know Cecilia, and there’s no bad blood, but we want this for boxing so bad, it is going to be the best fight of the night.

“I always have to work for everything that we have, and we don’t mind doing that. We’ve come from places harder than what you see us in now, and I want to seal the deal and solidify my win in august and let everyone know that wasn’t an accident, and that was me, unified undisputed World champion.

“We have always had a large amount of confidence, and we have just had to get those opportunities to show everyone else what we can do, and as I said before, we have come from places where this isn’t the hardest thing that we’ve had to go through so I think this will be a piece of cake.

“It doesn’t really matter what kind of game plan they bring. We are really prepared. Rick Ramos, my manager, and trainer keeps me diversified in boxing whether it’s the brawling, the movement, the standstill, we’re ready for anything.

“Cecilia brought retirement up after the last fight; those aren’t my words, those are hers, so I’m going to make her eat them.” 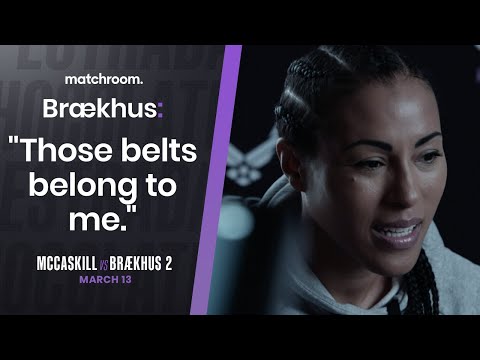 “She was so friendly, then she got the belt, and she was like, whoa, she goes crazy. It is definitely a new situation. You know, it’s fun for me, I want to get the belt back, and McCaskill has kept me very motivated; she’s kept me motivated through my whole camp.

The last time she knows she was lucky, so I think that’s where all the trash talk is coming from.

“Oh definitely. I had a rough training camp the last time; I was stuck six months in Big Bear. Now I had a normal training camp, and now I have to do what I always do. I have to box.

And I can do whatever, and I think I can stop her because I am definitely bigger and stronger, and I am a much better fighter, boxer. I’m much better technically and stronger, so I’m very confident going into this fight. And like I said, she provided me with a lot of motivation in camp.

“As a fighter, I have given her a lot of credit. I should definitely not be losing to her. She was home, she was in her home country, all the judges were home, she got her catchweight, and still, I beat her in one of my invites when I didn’t perform at the top. Saturday, I will be at my best, and she is nowhere near my level.

“I will win, so it is not even an option. I have a bigger name than her anyways with or without the belt.”

“This is not my final goal as far as my career goes, so I’m going to work hard to have a good win on this one and look forward to a unification fight. Yes, so far, everything is going very well.

“This is a great opportunity, and I thank God and you for giving me the opportunity. I am ready for this fight, and hopefully, come Saturday, I am a champion.

“We are prepared for a war, and we have worked well, we know how to handle the distance; we know we have to go in maybe take a punch, but we are really prepared for this fight.” 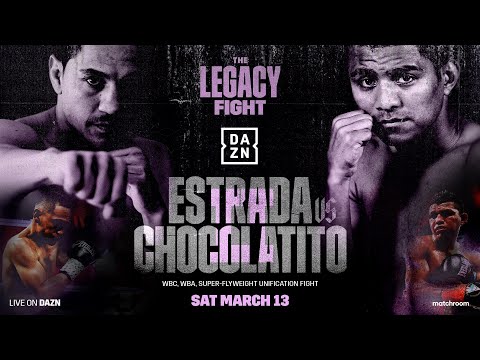 The more I can pull out of my tool bag, the more I can show who I am – heart and the competitive guy in me is going to reign supreme on Saturday night because I got a great opponent in Douglin to fight. This is an exciting time for me to see a very creative, powerful, strong Ammo Williams.

“I feel like I’m going to knock him out in a spectacular fashion. Many guys he’s been in the right with, I actually shared the ring with, sparring and helping them get ready for fights.

Of course, not in an actual fight, but I’ve seen the guys he’s seen, and I was ready when they gave me the card for him. Even though he fights at a higher weight class, I was still ready. I want the challenge. I want this.

“He’s a blessing. I know many times fighters act like we are super enemies, but honestly, he is a blessing for taking this fight because he is a gateway for me to be a World champion contender. Seriously, you can’t argue that I’m not ready for the real guys after I fight him. If I beat him when I knock him out, what are people going to say? That I need another ten fights? Another five fights? No, they’re going to say he took the risk, he took the jump, he got the fight, and he’s ready for the next step.”

“I’m so confident. First of all, I want to say a shoutout to him for taking the fight. He’s a blessing because he’s good for my career, another undefeated fighter to put me back in the position I want to be in. Not necessarily for a title shot, but to get back where I should be. To call out the fighters that are right beneath the champions, so beating him will be a great fight for me, a great thing. So shoutout to him.

“Shoutout to the fact that there’s no animosity; I like him as a person; we have a little beef, we don’t have beef, but I actually really like him. But I’m going to beat him up, though.

I’m going to really beat him up. But I’ll put him on Instagram right after I beat him up. I’m probably going to stop him, but he might be tough; maybe he’ll last; I’m not sure, I hope he lasts, but I’m coming to beat him up.

“We’re going to see, but as he said, everyone thinks of me as a journeyman because of the losses that I have, not understanding that boxing is a little bit deeper than fight night. Boxing is all about preparation. As you can see, I’m the fighter that will take a fight on short notice because I love the sport. I love the craft.

“I mean, I’m looking good, feeling good; I already made weight. People asking why Denis not in the gym? Weight is good already, so we are good; we are in shape. This fight is heaven-sent. So, shoutout to him for taking the fight. After I beat you up on Saturday, I’m going to take you out to eat because the first loss is the toughest, so I’m going to talk to you about how to get back in it and stay strong. But I like this guy. It’s going to be a fun night Saturday. It’s going to be a rebirth.”

“I am excited to be here. Thanks to Matchroom boxing for having me here. We put in a lot of work to get here, so we are just glad we have the opportunity, and we are ready to put in a show Saturday night.

“Everybody that’s here, everybody wants to be the best, so everyone that is here has worked for that. So, it is going to be interesting.”

“Come on now, you know he hasn’t seen me before. I’m not like the people he’s seen before.

“I’ve wanted to fight guys like this, undefeated guys, other prospects, and stuff like that, so I definitely want to move a little faster. Like I’ve been saying, I don’t need to be babied, I have the skills, I have the talent, I have the heart, as you said, I don’t turn down anybody, you can put anybody in there with me, and I’ll show you what I’m going to do to them.

“No, not just the US; I’m talking around the world; I’m the best prospect out right now; nobody is stopping me.”

“Ready to go. You know it has been 16 months without a fight, so yes, I can’t wait to get into the ring.

“Hopefully, it will be a big year for me. I want to move the world. In the UK, you guys have many good fighters, and I can’t wait to fight with them. I’m ready, and I want to show you on Saturday and then let’s see.

“It’s a good time for French boxing. Since 2016, we have had six medals, two gold, two silver, two bronze, and now professional boxing in France is going well. With Tony Yoka and others. We are ready to show all the world that we are ready to be at the top level. I am delighted and very excited to be here.

“We all know about the Mexican guys. They are tough fighters, they come to fight, and they are very ready, so yes, it will be a good test for me, and I’m ready for everybody. I’m ready.”