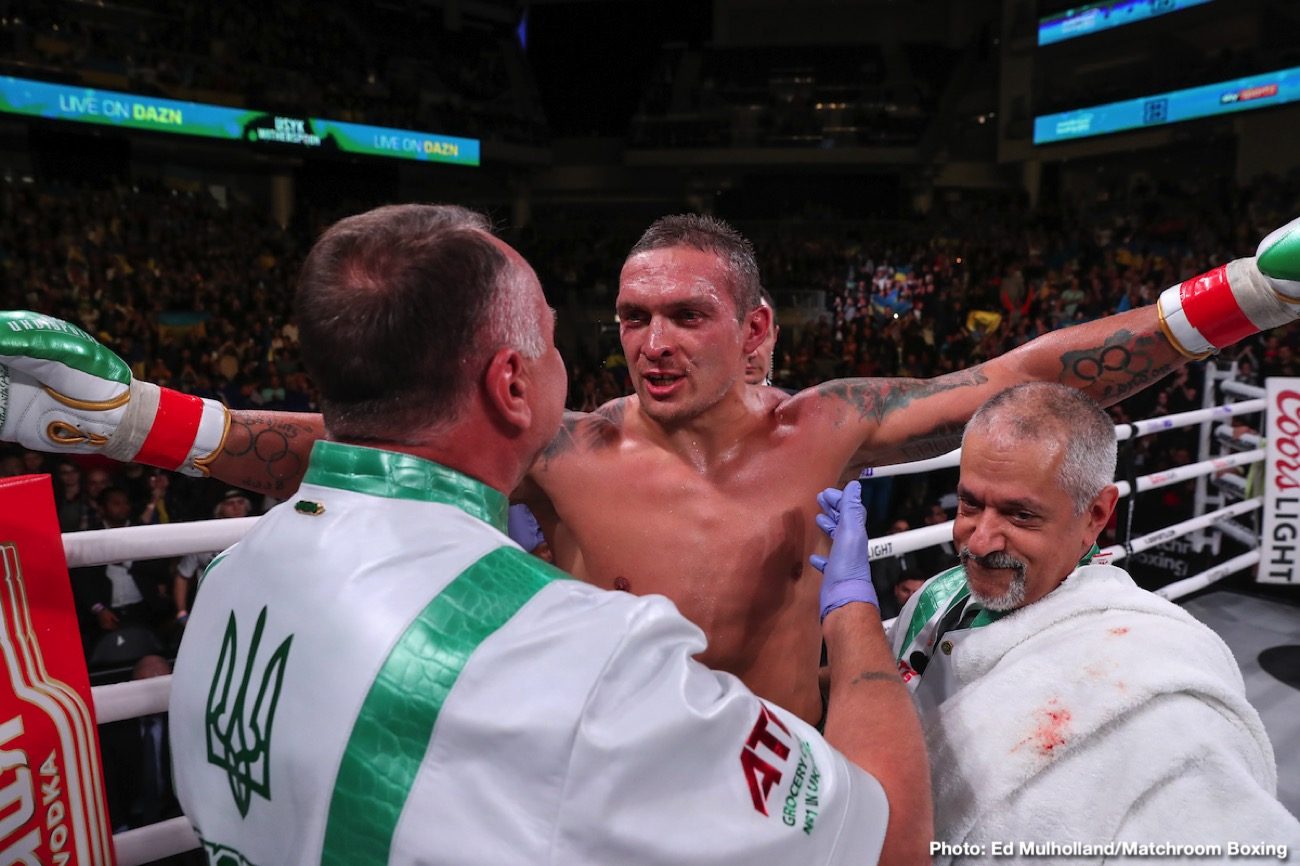 By Charles Brun: Oleksandr Usyk plans on forcing his mandated title shot for the WBO heavyweight title that is currently held by Anthony Joshua. Usyk (17-0, 13 KOs) is mandatory for that belt, and he plans on fighting for the title in 2021 after Joshua’s title defense against Kubrat Pulev.

Usyk’s promoter Alexander Krassyuk says that Joshua needs to face his fighter first before he fights WBC champion Tyson Fury or he gives up the WBO belt.

It doesn’t look for Joshua or Fury in terms of them meeting TWICE in 2021 with all four titles on the line. The two heavyweight champions got ahead of themselves by agreeing to a two-fight deal in 2021.

What Joshua and Fury can do is both defend against their mandatory challengers in the first quarter of next year. If they both win, then they can fight in the summer of 2021 for their first match next year, and then meet in the rematch in December.

As long as Joshua and Fury both defeat their mandatory challengers, then there’s no reason not to believe that they can fight next summer for the first of two clashes.

Fury’s promoter Bob Arum surprised a lot of people this week when he suggested that Usyk, 33, and Dillian Whyte can face each other to decide on a genuine mandatory for the Joshua vs. Fury winner to meet.

If Whyte and Usyk agreed to Arum’s suggestion, they would both be jumping through another hoop to get a title shot that they’ve already earned.

It appears that Fury and Joshua just assumed that their respective mandatory challengers Dillian Whyte and Usyk would sit back and let all of next year go by before looking to get their mandated title shots satisfied. In other words, Whyte and Usyk would watch their own careers stagnate and go nowhere while Joshua and Fury fight twice in 2021. 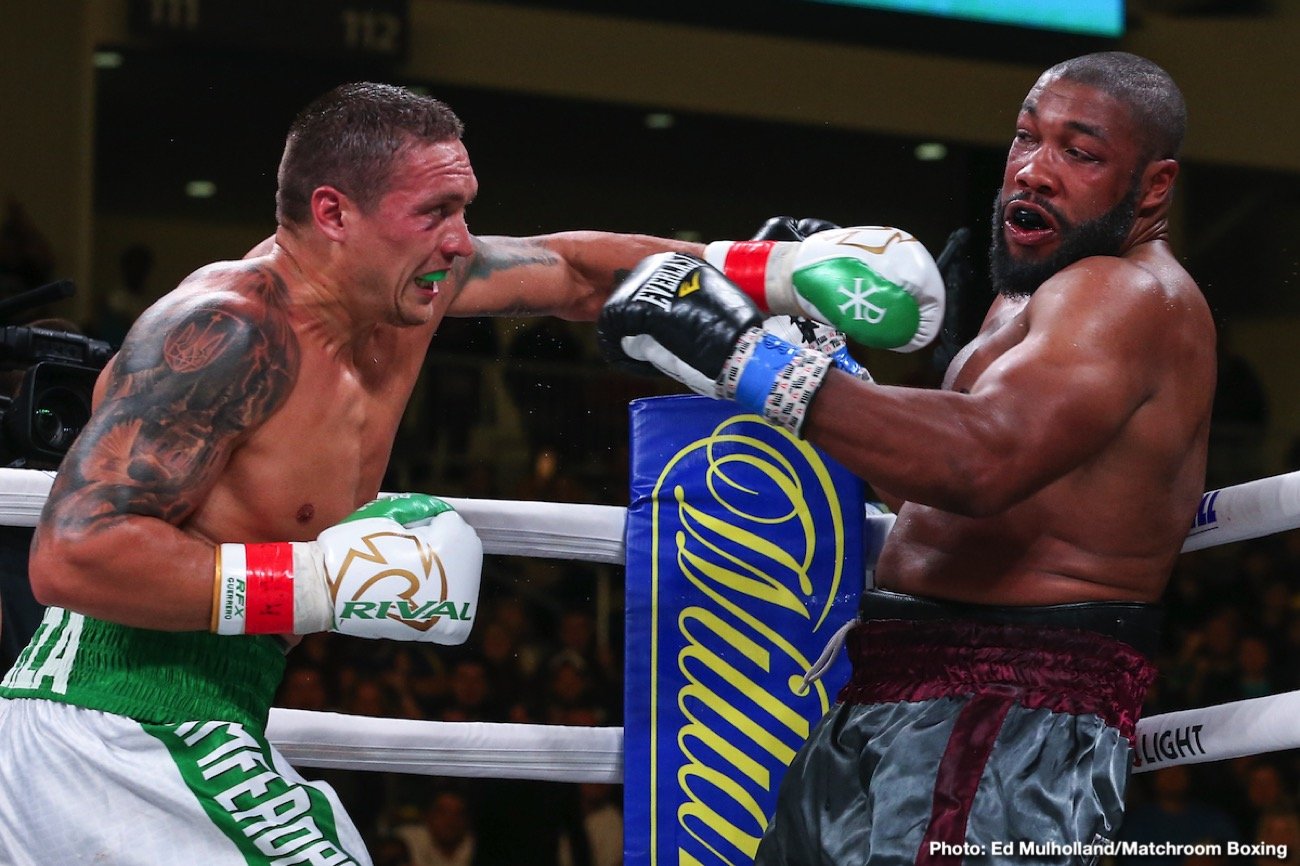 If there were a way of putting Usyk and Whyte into a deep freeze to keep them from aging while they wait until 2022 to get their title shots, then it wouldn’t be a big deal for them to sit while Joshua and Fury fight twice. They can’t do that.

Boxing is supposed to be a sport, and it arguably loses that when you get champions ignoring their mandatory challengers. Imagine an NFL team being allowed by the head of the league to skate past their playoff games to play in consecutive Super Bowls.

That’s kind of what Joshua and Fury would be dong if they maneuver around their mandatory challengers in 2021. What sport allows teams or players to do that. Professional wrestling? Is that what boxing is becoming?

While it’s possible that Fury and AJ can fight twice next year, it’ll require that both satisfy their mandatory defenses that are due.

Joshua must face Usyk before Fury

Usyk and Dereck Chisora (32-9, 23 KOs) are supposed to be fighting this year, but the pandemic has messed things up. We’re now hearing that Chisora and Whyte could potentially meet up in a cage match. If Chisora and Usyk are going to fight still, it probably won’t happen until the end of the year.

Since moving up to heavyweight last October, Usyk has fought once in the division in stopping Chazz Witherspoon in the seventh round.

If Joshua is stripped of his WBO title, then Usyk and Joseph Parker will likely battle for the vacant title.  The Fury vs. Joshua winner could then look to fight theUsyk vs. Parker winner for the undisputed heavyweight championship.