By Chris Williams: IBF lightweight champion Teofimo Lopez states that he’s interested in facing Ryan Garcia and Devin Haney, but they don’t want to fight him.

On Thursday, Teofimo claimed that an offer was made to WBC champion Haney (24-0, 15 KOs) for a fight, but his promoter Eddie Hearn never replied back.

Hearn responded on Friday, saying that he hadn’t received any contact about a fight between Teofimo and Haney for a unification match, as Lopez claims.

Teofimo’s promoters at Top Rank Boxing had previous plans on him facing WBA/WBC/WBO lightweight champion Vasiliy Lomachenko (14-1, 10 KOs) at the end of May, but the pandemic has caused the fight to be postponed.

In the meantime, Teofimo wants to stay busy fighting the best available opponents. Ryan and Haney are two guys he would like to fight if possible.

The travel ban that is in place will make it impossible in the short term for Teofimo to face many of the top 15 contenders at 135, including champion Lomachenko. That’s one reason why it’s essential for Teofimo to apply pressure on his promoters at Top Rank for them to put together matches with Haney and Ryan Garcia.

“This is the s*** I’m talking about. ‘Why don’t you want to fight [Devin] Haney?’ You guys don’t know the scoop on anything, man. I’m not done fighting tall fighters. What I said was my next opponent wouldn’t be tall, so I don’t have to worry about them right now.

“There are no tall fighters right there that we can make big fights about. So that’s what I meant. You guys took it out of context, and you guys bring up old s*** because you don’t have enough to say.

“We can do Jose Ramirez; we can do Josh Taylor. And we can do all those cats. I don’t even want those two to fight each other. And I want all those belts. I want to become undisputed at 135 and 140, back to back,” said Teofimo.

Boxing fans think Teofimo is afraid of fighting taller fighters since his tough clash against the 5’11” Masayoshi Nakatani last July. Teofimo had a massive amount of problems with the height and reach of Nakatani in beating him by a 12 round decision in a fight that looked closer than the scores handed down by the judges.

“Yes, I will fight this b***,” said Teofimo holding up a picture of Haney when asked if he would fight him. “We tried to fight him, and this one too [Ryan Garcia]. You p**** me off. Let them know. They’ll talk all that s*** from Twitter and all that s***.

“Yeah, we sent them offers. What do you mean? It’s like they lie to you guys, and make it seem. They can talk to each other and trash each other. They can make a fight with each other because they’re comfortable,” said Teofimo on Haney and Ryan Garcia.

It doesn’t look like Teofimo has any chance of fighting Ryan or Haney, so he would be better off keeping quiet about them. It’s reasonable to believe that if Teofimo’s promoters at Top Rank wanted him to fight Haney and Ryan, they would have already set up those matches a long time ago.

Eventually, we could see Teofimo, 22, face Ryan or Haney, but not now. It’s hard to predict.  For example, look at Top Rank fighter Terence Crawford. He’s been a professional since 2008, and yet he STILL hasn’t fought any of the elite 140 and 147-pound fighter.

Given Top Rank’s track record with some of their fighters like Crawford, it wouldn’t be surprising if eight years from now, Teofimo still hasn’t fought Haney or Ryan.

“I think Lomachenko wins, but I like Lopez’s confidence,” said Mikey Garcia in predicting a fight between Loma and Teofimo. “I like his [Teofimo] attitude. He’s young, he’s hungry, and he’s confident. I still feel Loma takes it. I don’t think it’s going to be an easy fight either. It’s going to be competitive and a good fight.”

“It’s going to be a good fight,” said Jose Ramirez on Teofimo vs. Lomachenko. “You think it’s going to go one way, and then it goes the opposite. I feel like Teofimo can come in really strong and be at the top of his game, or I can see Teofimo do really well for two or three rounds, and then after that, all the confidence that he had will be gone.

“You can have Lomachenko break him down. He wasn’t ready. It’s a fight that could go that way,” said Ramirez.

The punching power, size, speed, and youth of Teofimo makes him a real threat to Lomachenko. 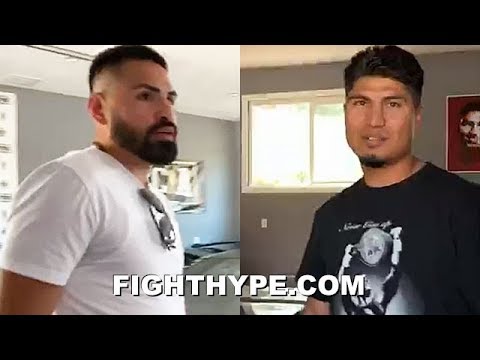 
« Hearn: GGG vs. Szeremeta in August; Canelo vs. Saunders in September