Hearn: GGG vs. Szeremeta in August; Canelo vs. Saunders in September

By Dan Ambrose: Matchroom promoter Eddie Hearn has a scenario where Canelo Alvarez and Gennadiy Golovkin can meet this December if they win their interim fights. Golovkin (40-1-1, 35 KOs) will potentially fight Kamil Szeremeta in August, and Canelo will take on Billy Joe Saunders in September.

If Canelo and Golovkin win their fights, then they’ll meet up in December.

Hearn isn’t saying if he floated this idea of his by Canelo (53-1-2, 36 KOs), considering that he would need to get back in training camp immediately after the Saunders fight to prepare to meet Golovkin in December.

Canelo likes to be the A-side, and he won’t be getting advantage of Golovkin if he goes straight into a training camp after facing Saunders in September. Canelo did that for his fight against former WBA super middleweight champion Rocky Fielding in December 2018 after facing GGG in September. However, Fielding was no threat to beating Canelo, and it was an easy fight.

NEWS:   Alvarez not worried about Billy Joe's drama, expects him to be there Saturday

Would Canelo have gone into a grueling fight against someone like Jermall Charlo or David Benavidez in December after facing Golovkin in September?

“My next question is about Gennady Golovkin. You were part of his promotional team,” said Chris Mannix on SI Podcast. “He [Golovkin] spoke last week, and he said he’s NOT ready to fight Canelo Alvarez in his next fight. He wants to go forward with a planned fight against Kamil Szeremeta, his mandatory challenger for the IBF title.

“This is obviously counter to what DAZN, his broadcast partner wants. When they signed Golovkin a year ago, they planned on doing a Canelo-Golovkin fight.

“If he does the Szeremeta fight, that’s three fights into the deal that they don’t get the marquee fight that they’re looking for. I know you talked to Golovkin recently. What’s his take. Explain to me how this can all work.”

“Gennadiy has had a little bit of an unfair rap on this,” said Eddie Hearn. “If you look at what happened. Gennadiy signed his contract with DAZN with the view of fighting Canelo in May of this year. It was always going to be his second fight effectively,” said Hearn.

After Golovkin fought Steve Rolls last year in May, he was supposed to fight Canelo last September. Canelo decided he’d rather fight Sergey Kovalev, who had looked vulnerable in his previous contest against Anthony Yarde.

“So all of a sudden, Golovkin is gutted. He wants to fight Canelo Alvarez. This is the reason why he did the deal and moved forward on the banner on the one guy that he wanted to fight so badly.

Canelo had his reasons for not wanting to face Golovkin in 2019. While some boxing fans believe Canelo chose to do that out of revenge, others think that he didn’t want another grueling fight.

NEWS:   Eubank Jr: Saunders will be groveling to fight me after Canelo

The second one was even harder for Canelo than the first match against GGG in 2017. Golovkin hurt Canelo twice in their rematch and dominated the second half after he gassed.

GGG will lose IBF title if he faces Canelo in September

“Fast forward, he fought Derevyanchenko in a ‘Fight of the Year’ contender and was due to fight Szeremeta in March or April,” said Hearn. “Obviously, we know that’s not possible, but he has a signed contract with Szeremeta. He almost was messed around; he feels once.

“So he’s got a new plan, signed that, and now he’s saying, ‘You’ve got to fight Canelo in September.’ One, if he does that, he’ll probably lose his IBF title. You know how strict they were about the Canelo situation anyway. Two, he hasn’t boxed.

“By the time the Szeremeta fight comes around, he probably hasn’t boxed in a year, and he’s coming off of absolute war. So I think in situations where contracts are in place. My plan is to just come in and tear up contracts. ‘Sorry, mate. The game’s changed.’

“There are promises that have been made not only to Golovkin but to Szeremeta as well. Those contracts have been sent to the IBF, confirming the mandatory has been signed.

“So I feel like Gennadiy, who doesn’t speak up too much, feels like, ‘Come on, guys. I wanted the Canelo fight. You gave me this other plan. I’ve signed into this, and now I’ve got to rip that up and go again,'” said Hearn.

Golovkin probably would be stripped by the IBF if he doesn’t defend against his mandatory Kamil Szeremeta. However, it wouldn’t be a big loss because it’s just a title. No one cares about titles once you get to the level where Golovkin is. Titles matter for fighters that don’t have a big fan base, but not for the popular guys.

“Gennadiy Golovkin vs. Szeremeta, a big favorite, but also is a record-breaking defense. If we could roll that into Canelo-GGG in December, then that’s what I’m saying to the DAZN guys right now.

“You have an obligation with a signed contract to fight Szeremeta. Let’s get that done in August. Canelo, if you want to fight in the meantime, we’ve agreed to terms with Billy Joe Saunders, no problem. You two fight in December, Then you can go back to the customers and subscribers, and say, ‘Great news, we’ve got Golovkin-Szeremeta, Canelo-Billy Joe, and guess what? If they beat each other, then they’re in the ring in December.’

“Hopefully, in December, we’re in a situation where gates and live crowds can return in Las Vegas,” said Hearn.

It could be bad if Hearn gets the boxing public’s hopes up for the trilogy fight between Canelo and Golovkin in December if he’s not sure it’ll happen. Golovkin would obviously take the fight, but Canelo is a different matter.

If he wanted to fight Golovkin, he would have faced him in 2019 instead of wasting time fighting Sergey Kovalev and Daniel Jacobs.

“I wonder if Golovkin needs a Szeremeta fight for a confidence perspective, and working on another fight with Johnathon Banks’s perspective,” said Mannix. “It would only be his third fight with his new trainer. I get all that, but I can also look at the other side of that, and I’m sure you have.

“All you’re talking about conservatively could cost another $50 million dollars when you factor in Golovkin’s payday, Canelo’s payday, Saunders’ payday, and Szeremeta’s payday. It’s probably well North of that. What’s your sense of whether DAZN has an appetite for all of that?”

It is going to cost more for DAZN to have Canelo fighting a needless match against Saunders and Golovkin, taking what amounts to being a stay busy fight against Szeremeta.

Canelo is the one that wanted to fight Saunders, so there’s nothing Golovkin can do about that. If Canelo wanted to help DAZN, he could have chosen Golovkin, David Benavidez, Artur Beterbiev, or Jermall Charlo. If DAZN had control over the opponent selection for Canelo, they could have insisted that he fight GGG ni 2019 instead of the shot Sergey Kovalev or the fading Daniel Jacobs. 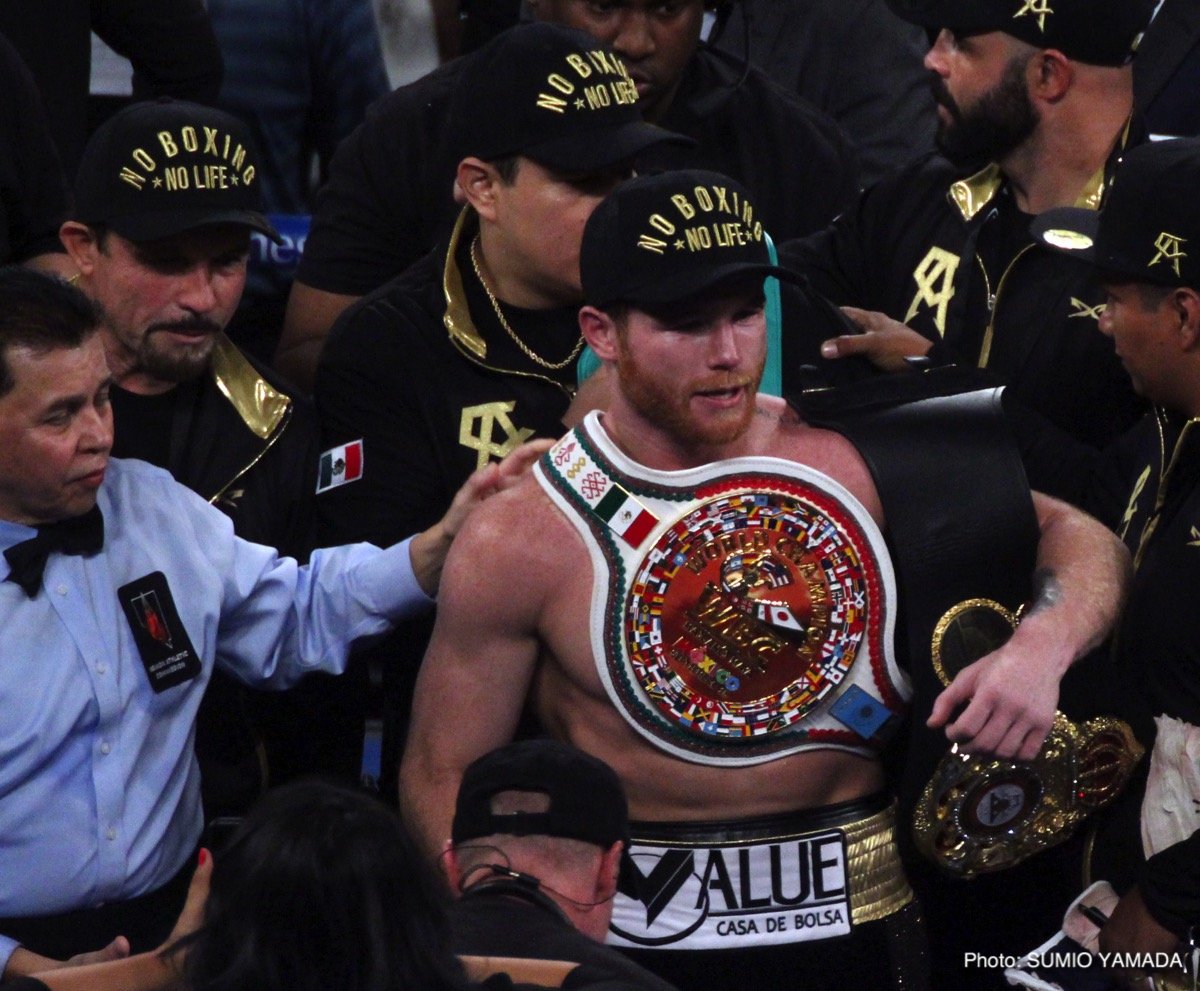 Canelo and Golovkin already had plans for other fights

“I think that was already scheduled,” said Hearn. “So, Saunders against Canelo was due to happen in May, but it didn’t happen. So now it’s happening in September.

“These are not new fights that have rocketed out of nowhere. These are exciting fights that were due to happen. You’re right, Chris. The game has changed. DAZN might turn around to all those guys and say, ‘This is what we want to do.’

“When we talk about Gennadiy getting another fight and working with Johnathon Banks, he was given a plan, his career, and his moment. Canelo’s fight against GGG is the absolute defending moment of Gennadiy’s career. He has got get that right, and he has to win that fight.

“So when he got the plan and signed the contract with Szeremeta, it’s not just easy. All we’ve done is delay obligations that were already in place. When we talk about spending money.Billy Joe Saunders against Canelo Alvarez is a great, great fight. We’ve got to come back with a compelling schedule,” said Hearn.

Canelo and Golovkin did have other obligations. What Hearn isn’t saying is that Golovkin wanted to Canelo this May, but the Mexican star chose Billy Joe Saunders. That was the third consecutive fight where Canelo opted to face someone else despite Golovking and DAZN wanting the fight.

Hearn: There’s going to be obligations

“There’s nothing more compelling than Canelo against GGG,” said Hearn. “So we have to show that is done, and that we can reach it and touch it. We’ve got a stacking up of obligations that were due to take place.

“The situation is there are going to be obligations, and everyone needs to be moving in the right direction to provide the best [content]. I’m just interested to see from a Top Rank, ESPN, PBC, and FOX of how, when, and who the fights.

“My plan right now is to put the same schedule that we had before, but I don’t think that’s everyone else’s plan,” said Hearn.

Everything got thrown off beginning in 2019 when Canelo opted not to fight Golovkin. Both guys were with DAZN, and that’s the fight that the streaming giant and the boxing world wanted. Canelo instead fought Daniel Jacobs last May, and then opted to face Sergey Kovalev.

With the Jacobs and Kovalev fights, Canelo burned through 2019 without fighting Golovkin. Some boxing fans think Canelo did this to age Golovkin a little more. 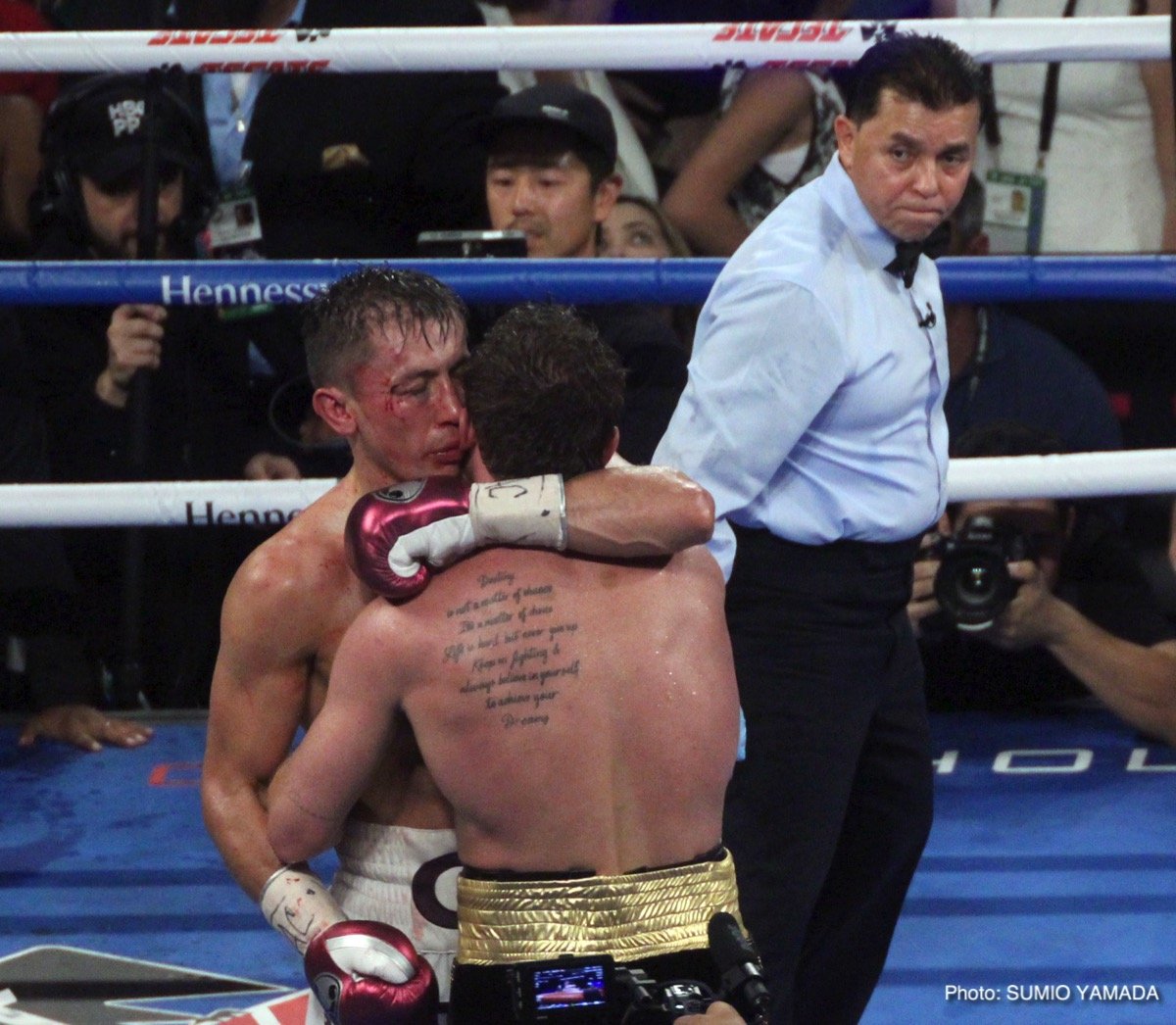 Canelo vs. Golovkin possible for December

“Have you had any conversations with DAZN since Golovkin’s assistance on fighting Szeremeta next?” said Mannix.

“Of course, we speak to DAZN all the time, and we’re building our schedule with them,” said Hearn. “Of course, they want Canelo vs. GGG as soon as possible. For one reason or another, it hasn’t happened as quickly as we’d like.

“While they want that fight next, they also understand Gennadiy was given a plan to move forward with, and that has to be considered as well. There are additional dollars to be spent on that schedule moving forward.

“If we can go back to the subscribers and say, ‘July, boxing is back on the platform, August is Golovkin and September is Canelo, September-October might be AJ, and then we go GGG against Canelo.

It’s possible that we could see Canelo and Golovkin fight in December, but it’s not likely. Canelo and Golovkin are both expected to win their next fights without any problems. Szeremeta cant punch, and he’s never fought a world-class fighter before.

To get Canelo to go along with fighting Golovkin in December might prove to be impossible. Canelo hasn’t said who he wants to fight after Saunders, but it wouldn’t be surprising if we see Jaime Munguia be the one he faces in early 2021. Canelo likes to fight three times per year, but he’ll likely draw the line when it comes to him fighting GGG with no rest after his Saunders match.