By Tim Royner: Eddie Hearn is still banging the drum for Deontay Wilder and Kubrat Pulev to both step aside so that IBF/WBA/WBO heavyweight champion Anthony Joshua can face WBC belt-holder Tyson Fury in 2020.

Hearn doesn’t want to wait for Joshua and Fury to fulfill their contractual obligations in defending against Pulev and Wilder.

This is the same distraction that Hearn helped create before Joshua’s first fight with Andy Ruiz Jr. last June. Instead of letting Joshua focus 100% on his high-risk title defense against the fast-handed Ruiz Jr., he spoke night and day of a unification fight between AJ and Wilder.

We all saw what happened. Joshua looked disengaged against Ruiz, and he took full advantage of that by stopping him in round seven at Madison Square Garden in New York.

Hearn is one of the few that still believes boxing will return in 2020, but it’s not looking good, though. The way things are right now, the chances are strong that nothing will happen until 2021.

That means that even if Wilder and Pulev do agree to step aside, we’re probably not going to see Fury and Joshua fight until next year. Unless Hearn can rent a private island for Joshua and Fury to fight in 2020, it’s a long shot for them to compete this year.

Not much is being said by about WBC mandatory Dillian Whyte. He’s supposed to be fighting for a world title against Fury by February next year. The way that Hearn is talking, Joshua and Fury will be fighting either next or after they make their contractual based title defenses.

If Joshua faces Fury after those fights, then there’s no chance that Whyte will get his title shot next February. Whyte will be the forgotten man in this equation, won’t he?

Wilder and Pulev need to step aside

“That’s not something that’s being discussed at the moment, but it’s something that everybody has to run through in their minds at some point,” said Eddie Hearn to Seconds Out on the potential of Wilder and Pulev stepping aside.

“We have a contract to fight Kubrat Pulev, and Wilder has an agreement to fight Tyson Fury. Those are the fights that will happen next. If Wilder and Haymon and Arum spoke and said, ‘Okay, we would be willing to step aside for X, and Bob Arum came to me and said, ‘I think I might be able to get Pulev to step aside.

“Would you be interested?’ The answer is absolutely yes, but for Deontay Wilder, what this is going to teach everyone is a bird in the hand is like two in the bush. As a fighter, I think this is going to help us [Matchroom Boxing] make bigger fights sooner because who knows what’s going to happen in this crazy world we live in,” said Hearn.

You can only imagine how much Wilder would want for him to step aside to let the Joshua vs. Fury fight to go ahead.

Unfortunately, no one cares to see Fury fight Wilder a third time, and likewise, people don’t want to see Joshua face Pulev. But the fact that Joshua and Fury care about their titles, it makes it necessary for them to defend them. If they just vacated the belts, then they could probably move ahead and fight without being weighed down for fights that fans aren’t interested in seeing.

“So I would be saying to fighters moving forward is rather than taking that warm-up fight that you want, which by the way, no fan and no broadcaster wants to see, how about you take more money and go into the big fight now, you know?” said Hearn.

“I think you’re going to see better and bigger fights sooner when we come back. And again, that could relate to AJ and Fury if that opportunity did present yourself. This is your chance to be undisputed. ‘We know the money is going to be monstrous, but we might not get it again. So do you want?'” said Hearn.

With the nice money that the popular fighters get for tune-up fights, why would they want to go straight into a high-risk match? The tune-up fights are easy paydays for a lot of the fighters, so they’re naturally going to want to take them. You can argue that training camp prepares fighters adequately to take on the best, but they want the warm-ups because it’s easy money.

Chances for Joshua vs. Fury increase if no boxing by August

“I know having spoken to AJ; he would be prepared to move into that fight next. We’re more than happy, and we have a contract to fight Pulev. I think the more chance of that happening is if we don’t see boxing return by August. And then all of a sudden, ‘I’m only going to box once this year. Maybe I’ll go straight in.’

“To be honest, anything can happen, but as I said right now, we have a contract to fight Kubrat Pulev, and that is the fight that we expect to take next,” said Hearn.

What Hearn says doesn’t make any sense. Pulev and Wilder aren’t going to be any more interested in stepping aside of boxing doesn’t return by August than they are now. If anything, Wilder and Pulev will be even more impatient to get their title shots.

There will be pressure from boxing fans on Pulev and Wilder to step aside, but why would they do that? Pulev is better off fighting Joshua rather than waiting. Who knows what would happen if Pulev steps aside. He could wind up having to fight Wilder if he’s last man standing. Wilder vs. Pulev won’t be as big a money fight for the Bulgarian than a match against Joshua.

It’s up to Matchroom and Top Rank if they want Pulev and Wilder to step aside. If they can offer both guys enough money for it to be worthwhile to step aside, they might do it. 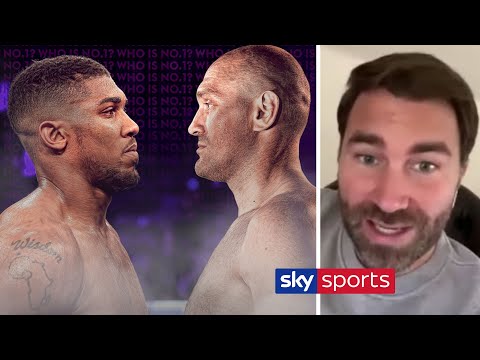 Ryan Garcia: ‘I know how to beat Lomachenko’ »