Ryan Garcia: ‘I know how to beat Lomachenko’

By Matt Lieberman: Ryan Garcia says he knows the blueprint in how to beat Vasiliy Lomachenko, and he doesn’t see his next opponent Teofimo Lopez being capable of following it. Teofimo, 22, has too many holes in his game to send Lomachenko crashing down to the second defeat of his career.

Garcia isn’t a puncher, and he might not be able to take advantage of the blueprint in how to defeat Lomachenko.

The design that Ryan talks about is the one that Mexican boxing great Orlando Salido created with his victory over Lomachenko in 2014. Salido took it to the body of Lomachenko and focused on that area to wear him out. Teofimo can throw to the body as well, but he’s more of a classically trained head puncher. He doesn’t have the body-punching style that Salido had, and he might not be able to change his game to use that style of attack against Loma.

Ryan thinks a fighter that would do well against Lomachenko is WBA lightweight champion Gervonta’ Tank’ Davis, who would be too much of a “Dog” for the 32-year-old WBA/WBC/WBO l135 -lb champion. Unfortunately, the politics of the sport may keep Tank and Lomachenko apart until it’s too late.

Mayweather Promotions won’t likely won’t let Tank Davis fight Lomachenko until he’s older. Whether Lomachenko and his promoters at Top Rank will be agreeable to facing Tank in 4 or  5 years is unknown. It’ll depend on how popular Tank is by then, and whether his career is still going well.

There’s a blueprint in how to beat Lomachenko

“He’s thinking of how to work, how to get positioning, and how to move in the ring,” said Ryan Garcia said to Fighthype about Lomachenko. “He took what willy pep and Sugar Ray Robinson, their footwork, Joe Louis, that nice little smooth, like fluidity.

“He took it to his level and his talent, you know? So unless you have the talent and the right game plan, [you won’t win]. I know how to beat Lomachenko. It’s already out there. There’s a blueprint there, and he’s trying his best not to fight people like that. You know what I’m talking about.

“You know the loss he had. So you don’t fight nobody like that,” Garcia said in talking Lomachenko avoiding fighters that have the body-punching style like Orlando Salido.

It’s not going to be easy for any fighter to land shots to the body of Lomachenko because he moves a lot, but it’s still possible. Salido followed Lomachenko around the ring and hammered him to the midsection. That was a long time ago, though, and Lomachenko has become more mobile. He’s not going to stand and trade with Teofimo if he feels he’s going to get the worst of it.

Teofimo isn’t a tremendous inside fighter like Salido, though, so it’s going to be hard for him to follow his blueprint against Loma. The long power shots that Teofimo likes to throw will be easy for Loma to dodge. That’s why Ryan is picking Lomachenko to beat him.

Tank has a better shot of beating Lomachenko than Teofimo

“If you’re trying to outbox Lomachenko, you better be an animal and the same kind and same worth ethic in learning the art of boxing as him. If not, then be a dog,” said Ryan.

“Gervonta has a better chance of beating him [Lomachenko] than Teofimo because Gervonta is a dog,” said Ryan Garcia. “He’ll dog-out Lomachenko. He’s just too strong for Lomachenko; you know what I mean? I already see how s*** plays out. I already know how it’s going to go. They’re not going to beat me, though,” said Ryan.

Gervonta’ Tank’ Davis has got the chin, and the toughness to cut off the ring on Lomachenko to wear him down. Lomachenko will land a lot of shots on Tank the same way that Yuriorkis Gamboa did last December, but if he gets greedy trying to throw his combinations, he’ll get nailed.

Teofimo has the speed and power to knockout Lomachenko, but he may not be willing to tough it out long enough to land a big shot. In Teofimo’s fight against Masayoshi Nakatani, he seemed to lose confidence when he had to deal with adversity. When things weren’t going Teofimo’s way, he looked flustered.

The injured Gamboa was doing reasonably well against Tank for the first 11 rounds in throwing one punch at a time, but he was blasted out in the 12th when he got greedy. Gamboa tried to open up with combinations, and he got knocked out.

“It wasn’t nothing I hadn’ felt before. Teofimo isn’t a crazy talent. He’s a little bit more naturally gifted than Lomachenko, but Lomachechenko puts too much of his mind’s IQ into boxing. He’s [Teofimo] not going to be able to keep up with that IQ. That IQ [of Lomachenko] is going to f*** him up. I really don’t give a f*** who wins, but I’m just giving my opinion. I think Lomachenko wins,” said Ryan.

Teofimo will have a puncher’s chance against Lomachenko, but he’ll need to take a lot of shots for him to land a big one. The movement of Lomachenko will make it difficult for Teofimo to land his headshots. And once Teofimo takes power off of his punches, he’ll be just like any ordinary fighter, and Lomachenko will school him. 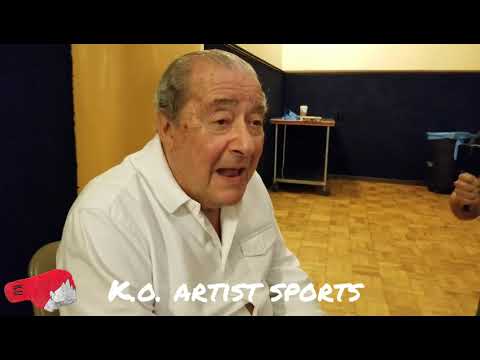 Can Wladimir Klitschko still compete with the elite heavyweights? »