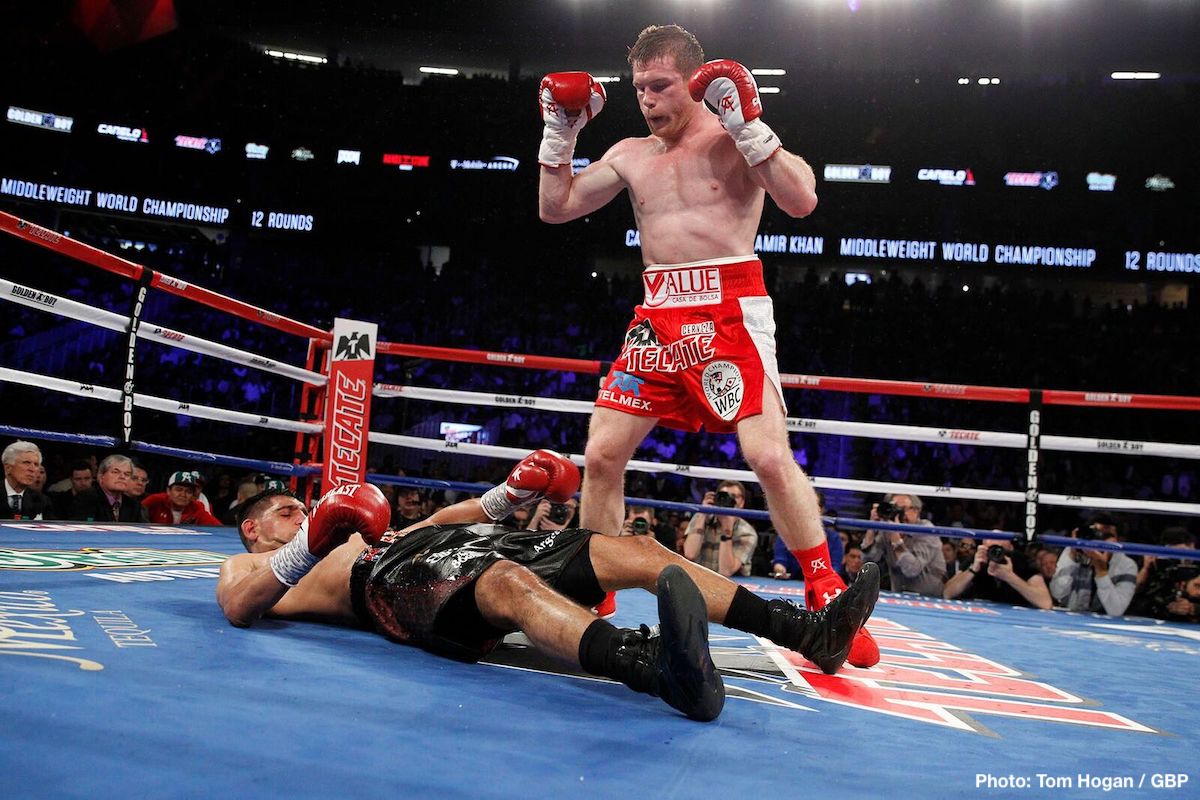 By Allan Fox: Amir Khan says that the gloves that Canelo Alvarez wore in his fight with him had less padding around the knuckle area of the gloves. Khan says it was like being hit with a glove with no padding in them. He describes it as being hit by a “baseball bat.”

Khan was knocked out in the 6th round by Canelo in their fight in May 2016. Going into the sixth round, Khan was doing well in outboxing Canelo and frustrating him with his speed.

Canelo knocked Khan out in 2016

In round 6, Canelo timed Khan and tagged him with a big right hand to the head that knocked him out cold. Khan hit the deck was badly hurt.

Although Canelo was smaller than he is nowadays, he still had plenty of punching power to hurt Khan when he finally unloaded on him in the 6th.

Khan states that it’s not an even playing field in boxing in terms of the gloves that the fighters wear. Instead of all fighters wearing the same type of gloves, they can change to choose whatever brand they want. As long the gloves weigh the right amounts, then they’re given the green light.

The problem Khan has with that is the gloves are made differently with some having less padding around the gloves, and made of different materials. 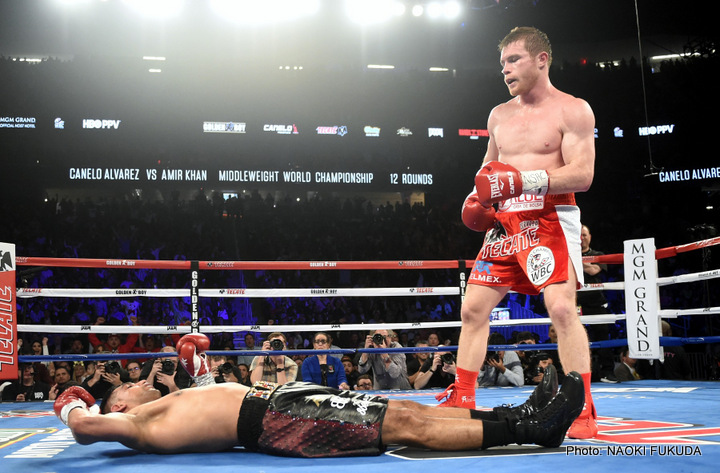 “I’ve always said boxing isn’t a level playing field when it comes to the gloves,” said Khan to Fighthype. Every glove is different. When I fought Canelo, he had the Everlast horsehair gloves on. When I put my hand in, it was like pushing to the wall, but you’re going to damage your hand as well.

“They were solid. It was like being hit with a baseball bat. The foam padding ones, the shape always stays the same. With the horsehair, it fades more towards the back of the hand. So that way, your knuckles are more visible. Without padding in the way, that’s going to put more pressure on your knuckle. So you’re going to be hit with a bare hand.

“I could never do that because my hands aren’t strong enough to do that. I’d break my hand if I fought like that. Some fighters have the hands where they could punch through a wall and wouldn’t break their hands. I think the playing field should be the same for all fighters,” said Khan.

Boxing needs to get it’s act together as far as gloves go. Letting fighters wear different types with the knuckle area of the gloves having different amounts of padding based on the brand, it sounds like chaos. If this was football, it would be like playing with a football that either has too much or too little air in it. Or a team watering the field down ahead of time to slow down the other team’s fast running backs and receivers.

Canelo’s gloves hand nothing in them – Khan

“You’ve got Grant, you’ve got Rivals, you’ve got Everlast,” said Khan about the different glove types.’ You’ve got all kinds of different types of gloves. Every glove is different and made in a different way. Nowadays, you can talk to the owner, and say, ‘Listen, I want a knockout glove. Make sure the padding is more on the wrist and not on the knuckle…I can call up and say ‘I’ve got bad hands.

“I need more padding on the right hand,’ and he’ll say, ‘No problem.’ So imagine someone saying, ‘Look, take the padding away from the hand and put it more on the top half. They should have one glove [for everyone]. That’s why they have these brutal knockouts happening.

“When you’re fighting someone, and you know they’re wearing a certain glove, you know what their game plan is. You’ve got guys that aren’t really punchers, and they’re going to wear the smaller Reyes gloves. You think this guy is going to try and knock you out. I’m going to have to be smart in this fight and be prepared.

“Then you’ve got Canelo, who is wearing the MX gloves, and they’ve got nothing in them. I knew that he was just looking for that one big shot. You know the mentality from the type of gloves they’re wearing. Try it next time. When you see a fighter, look at the type of gloves they have, and that’ll tell you about his game plan,” said Khan.

It sounds scary what Khan is talking about with Canelo’s gloves. He hits hard enough as it is, but if his glove has little padding around the knuckle as Khan maintains, then that much be painful.

“I’m excited to see the Lomachenko Lopez fight,” said Khan. “I think Lomachenko is a better fighter, is more skillfully, and will make him miss a lot. Lopez is a good fighter, but I don’t think he’s at the level of Lomachenko at this time.

“You’ve got Anthony Joshua fighting Pulev. Pulev is trained by Joe Goosen. I think Joe Goosen is a good trainer, and I think he’ll do good. And I think he will help him. Look, heavyweight in the division has a shot. It’s all about. With Joshua being caught by Ruiz and knocked out,

“The way boxers are, everyone thinks they have a chance against him now. Then you’ve got Fury and Wilder, dangerous and still at the top. The third fight is one that I’m really looking for. In looking at Wilder in the second fight, he didn’t seem himself. It was like something happened to him, and he couldn’t let his shots go.

“That was an excuse. He shouldn’t have used it. It was heavy. He should have taken it on the chin, and said, ‘It wasn’t my night, and come back stronger. In the first fight, we saw how he came into that fight. I think it makes him look like a sore loser in coming up with these different excuses. No disrespect,” said Khan.

Well, Khan will eventually get a chance to see Fury and Wilder fight in a trilogy match, but it won’t be soon. They’re July 18 fight has been postponed to October 3, and it may get moved again.

Deontay will try and lure Fury in

“They’re both my friends, Fury and so is Wilder,” said Khan. “I think the third one will show who the man is. It did surprise me because normally no one wants to go head to head with Wilder. He’s a tough fighter that comes forward and tries to blast you out. No one wants to stand with him and take those shots.

“Guess what? Fury did do that. Fury put the pressure on and pushed him back, and really put him on his back foot, which we’d never seen him do. Fury’s not really a pressure fighter, but he put it on in that fight. But again, Wilder’s not a guy on his back foot. It showed me a new thing.

Wilder is very likely to try a number of different things to win the fight. It won’t be just one thing because he rarely has success early. Wilder will shift gears trying different game plans to try and win.

Wilder was surprised by how Fury fought

“I think he [Wilder] was shocked by the way [Fury fought],” said Khan. “Wilder didn’t expect that from him. He walked the talk. ‘I think he’s going to run again, and I’m going to chase him and bang him out.’ He looked surprised. Sometimes when you have the pressure on, you don’t know what punches to throw.

“Because every shot was a hard one early, he defended them, missed them, and he wore himself out, Deontay Wilder. I think the third one is the one where both of them are going to be more cautious. It’s going to be a good one to watch,” said Khan.

It looked like Wilder was totally unprepared for Fury coming forward against him in their fight on February 22. Wilder never made any adjustments in the fight, and this allowed Fury to continue to walk him down and blast him.