Dillian Whyte vs. Alexander Povetkin ANNOUNCED for May 2 in Manchester, England 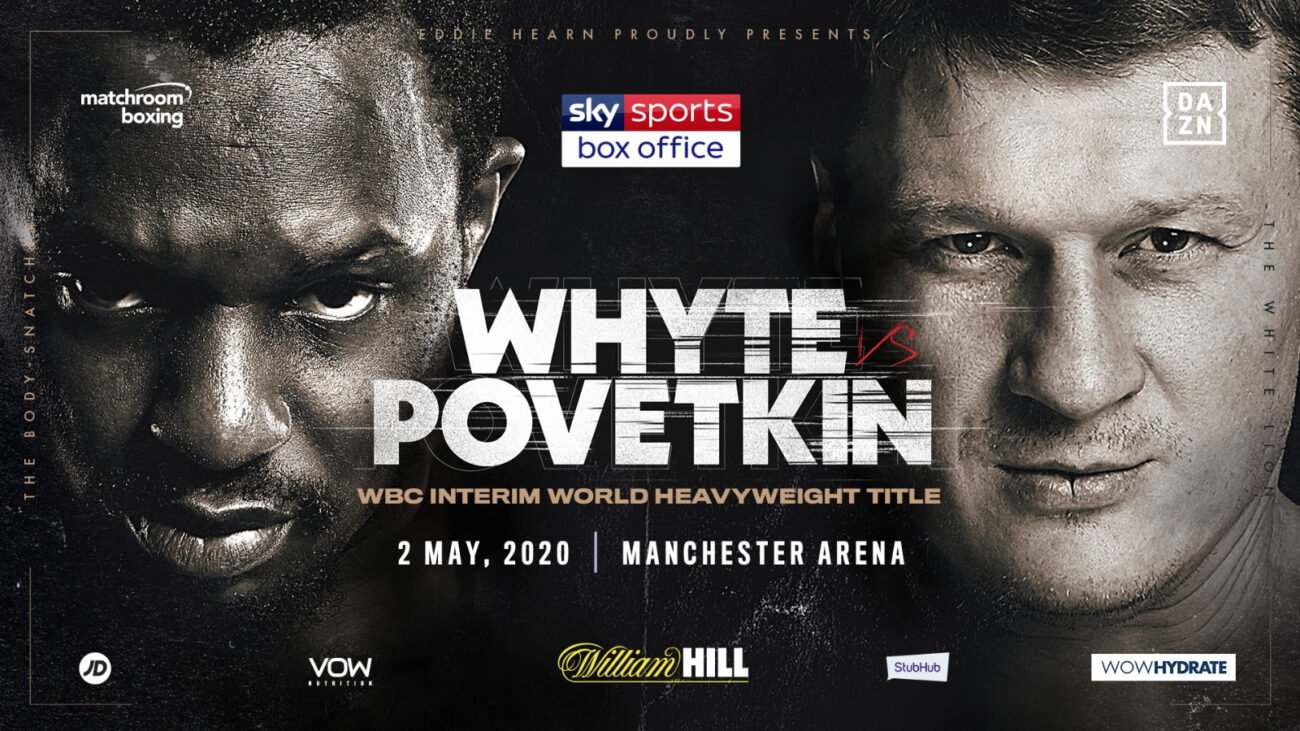 By Tim Royner: Alexander Povetkin will be looking to rip away the interim WBC heavyweight title from Dillian Whyte in their fight on May 2 at Manchester Arena in Manchester, England. The Whyte vs. Povetkin fight was announced on Tuesday. It’ll be shown live on Sky Sports Box Office in the UK.

Whyte will gain respect from fans for facing Povetkin, but it’s still not a great match-up. Povetkin is coming off of a draw against Michael Hunter, and he was knocked out by Anthony Joshua in 2018.  Povetkin has just one win in the last two years of his career, and that makes him a someone that fans can’t get excited about.

Since the Whyte-Povetkin fight was announced earlier today, there has been a lot of complaining from boxing fans about it being put on pay-per-view on Sky Box Office. Fans don’t see Whyte vs. Povetkin as a contest worthy paying to watch.

A loss here for Whyte and it pretty much is game over for him, and utterly bad news for his career. It took Whyte nine years to get in position to fight for a world title and probably doesn’t have another nine left in him to get another title shot, especially with him ignoring the sanctioning bodies when they order him to fight in title eliminators. Whyte wants fights with Deontay Wilder, Tyson Fury, and Anthony Joshua, but he can forget about that if Povetkin thrashes him.

Whyte (27-1, 18 KOs)  will be taking a risky match against the 40-year-old Povetkin (35-2-1, 24 KOs) for the chance of getting a nice payday on Sky Box Office PPV. It’s a risk for Whyte because if he loses the fight, then he can forget about challenging for the WBC heavyweight title in 2021.

Povetkin is a threat to a hittable heavyweight like Whyte, who has looked increasingly vulnerable now that he’s no longer taking on easy marks like Lucas Browne and Robert Helenius.

The 2004 Olympic gold medalist Povetkin recently defeated Hughie Fury by a lopsided 12 round unanimous decision last August. In Povetkin’s last fight, he fought to a 10 round draw against 2012 U.S Olympian Michael Hunter.

Dillian is guaranteed a title shot against whoever ends up with that belt. Tyson Fury has the WBC title at the moment, but he’s expected to vacate it well before Whyte gets his mandatory shot.

There’s a very good possibility that if Fury beats Deontay Wilder in July and then Anthony Joshua in December, Whyte will be fighting for the vacant WBC title against one of these contenders in 2021:

What would be sad for Whyte is if he ends up having to face Luis Ortiz, who chose not to face in 2018 in a title eliminator? The World Boxing Council ordered Whyte to face Ortiz in a title eliminator but messed things up for himself by electing to instead fight Dereck Chisora. That self-defeating, ham-handed move on Whyte’s part delayed him getting a title shot.

Dillian could have fought for a world title in 2019 had he went along with the WBC’s wishes and faced the southpaw, Ortiz. However, there’s a good chance Ortiz would have beaten Whyte, so it was perhaps a good idea for Dillian to dodge that fight.

Wilder RIPS Whyte for being a hypocrite

“They [WBC] ordered him to fight what he called an ‘old man’ in Luis Ortiz, but who is he [Whyte] fighting next? And how old is Povetkin? He’s 40,” said Wilder to Sky Sports News in pointing out that Whyte is a hypocrite for fighting 40-year-old Povetkin after calling 40-year-old Ortiz an “old man.”

Whyte won the interim WBC title last summer in beating Oscar Rivas in a title eliminator in London, UK.  It wasn’t a great performance by Whyte or the referee, who blew a call in the 12th round when he stopped the action after Dillian was hurt with a body shot from Rivas.

Thinking it was a low blow, the referee Victor Loughlin gave Whyte time to recover from a shot to the bread-basket by Rivas. The time-out might have saved Whyte from being knocked out.

In Whyte’s last fight, he went through pure agony in defeating journeyman Mariusz Wach by a 10 round decision on December 7 on the Joshua vs. Ruiz Jr. undercard in Saudi Arabia. Whyte came into the fight at a career-high of 271 lbs, and was walked down by the 6’7 1/2″ Wach all night long, and battered. The size of the huge Polish fighter gave Whyte a lot of issues.

At the end of the fight, Whyte’s face looked like it had been slammed on the pavements dozen times. He looked and sounded terrible. His speech seemed slow, as if he was groggy or punch drunk from getting hit so many times by the big 6’7″ Wach. Even the next day, Whyte still didn’t sound right.

He cannot afford to get beaten up like that too many more times before he challenges for the WBC title because he may not keep his mandatory spot. That’s one of the reasons why the Povetkin fight is so risky for Whyte. All of a sudden, Whyte has taken a career’s worth of punishment in his last 4 fights against these fighters:

“This is a Heavyweight thriller and so important to the landscape of the division,” said Eddie Hearn. “Dillian Whyte sits as Mandatory Challenger to Tyson Fury and while the wait is frustrating, Dillian continues to take high-risk fights and that’s why he is such a fans’ favourite.”

Whyte had a chance to fight for a world title in 2019 against Anthony Joshua, but he chose not to take it. That was a missed opportunity for Whyte.

If Whyte beats Povetkin and finishes 2020 without having lost his interim WBC title, he’ll likely scrap for the WBC title against one of the top 10 contenders. Depending on who it is, Whyte could win the WBC title next year. All bets are off if it’s Ortiz that faces Whyte for the WBC belt though. That’s a bad match-up for Whyte, which is probably why he opted not to face Ortiz when the WBC ordered the two to fight in a title eliminator in 2018.