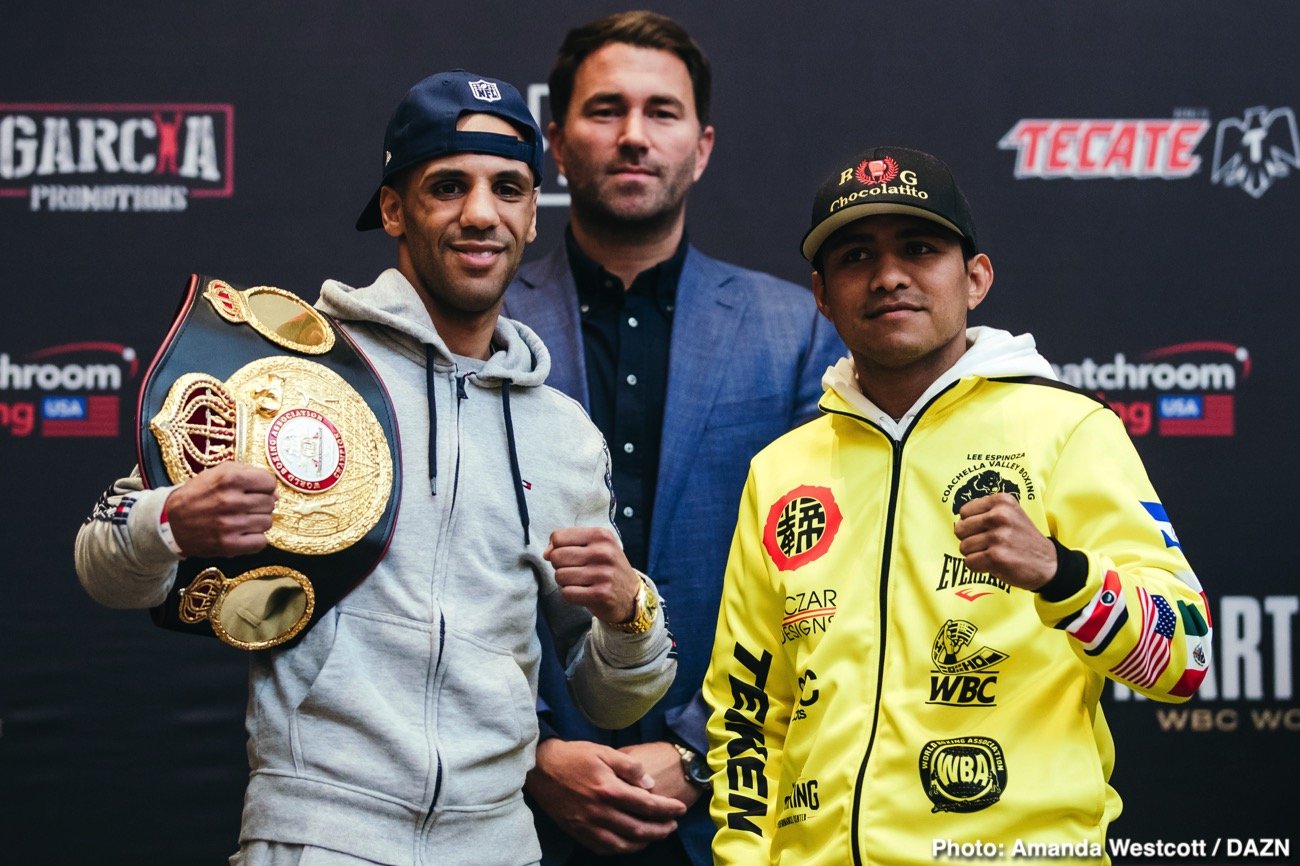 By Dan Ambrose: The highly popular Roman ‘Chocolatito’ Gonzalez will be taking on WBA World super flyweight champion Kal Yafai this Saturday night on a Matchroom promoted card at The Ford Center at The Star, in Frisco, Texas. This will be Roman’s second fight since coming off of knee surgery in December 2018, and he says he’s feeling rested and “explosive” for this contest.

Three years ago, Gonzalez was the #1 pound-for-pound king of the sport, and a star on the rise. Things changed dramatically for the worse for Chocolatito when he suffered 2 shock defeats to Srisaket Sor Rungvisai in 2017.

Chocolatito wants to show fans he’s still at his best

Viewed now by many fans as ‘finished goods,’ Gonzalez will be trying to win Yafai’s WBA title on Saturday, and then possibly facing WBC champion Juan Francisco Estrada in a unification match.

Yafai vs. Chocolatito will be fighting as the chief support on the undercard of the headline match between Mikey Garcia and Jessie Vargas on DAZN. Gonzalez realizes that he’s the underdog for the fight against the younger and bigger WBA 115-lb champion Yafai, but he’s confident that he’ll win by showing his old form. A win for Chocolatito would be a surprise, but it’s entirely possible.

Yafai still hasn’t fought anyone at the elite-level during his eight-year pro career, and he’s viewed as a paper champion by a lot of fans due to the careful way he’s been matched by his promoter Eddie Hearn.

Chocolatito coming off a win over Diocos

Gonzalez recently beat Filipino fighter Diomel Diocos last December by a knockout in the 2nd round. Diocos had better hand speed and work rate compared to Chocolatito. Roman did a good job of wearing Diocos down with left hooks to the body, which took away his legs and forced him to fight off the ropes.

In the 2nd round, Gonzalez hurt Diocos with a right hand to the head. The fight was stopped shortly after that when Gonzalez followed up with a barrage of shots.

“I’ve been wanting this fight for a long time too. It’s going to be a hell of a fight, and I’m coming into it in the best shape to win the match on Saturday,” said Roman Gonzalez to TheRingDigital on his match against Yafai. “Running in the morning in training camp,” said Gonzalez on his knee injury.

“I haven’t thought about it yet, but after Saturday’s we’ll see what’s coming. Before the fight, I never saw Rungvisai go orthodox. Be ready. You’re going to enjoy the fight,” said Chocolatito.

“My weight is perfect, and my condition is awesome, and we’re almost ready,” Chocolatito said to Fino Boxing. “That break that I had gave me a lot of energy to go back to training, so I think it was a good thing that happened [knee problem] to me at that moment in my career. I’m happy the public enjoys my style of fighting, and I bring out very good condition, and I bring good physical qualities to this fight.

“So you’re going to see the old Chocolatito, and it will be explosive. I come to bring a great show. We both come in great shape and great physical condition. I can’ tell you exactly what I have to be aware of, because as the fight goes on, it may change a little bit. I will be very proud and very happy where God has taken me to be a world champion again,” said Gonzalez.

If this is the same Gonzalez that beat McWilliams Arroyo and Brian Viloria, then Yafai could be in trouble. Beating Yafai won’t be easy for Roman, as the British fighter likes to move around the ring, and he’s not going to stand and fight him. Yafai will be hitting, moving and tying Gonzalez up to keep him from getting his shots off.