Hearn on Brook: ‘We’ll find out Saturday if he’s the same fighter’ 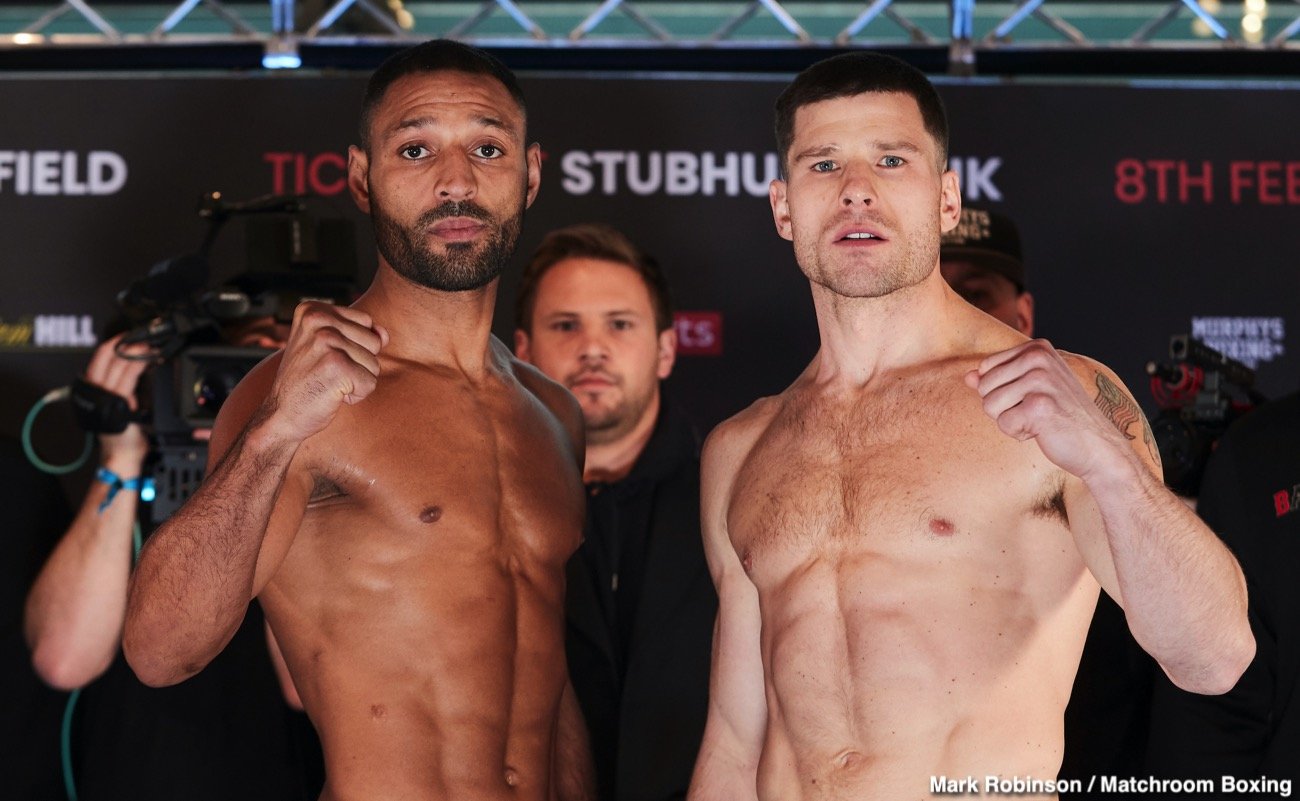 By Tim Royner: Kell Brook will need to prove that he’s still the same fighter he once was this Saturday night against 154-lb contender Mark DeLuca.  Although Brook’s promoter Eddie Hearn likes to hear him talk positively about how he’s turned things around in his life, it doesn’t mean anything. Hearn says he’s got to show it in the ring.

Brook, 33, said this week that he’ll “retire” if he loses to DeLuca. We’ll have to see if Brook keeps his word if he does get beaten.

Hearn says it “doesn’t matter what Brook (38-2, 26 KOs) says about him being a different fighter now that he’s putting in 100% effort for the first time in his 16-year professional career. Brook has got to prove, and can’t just scrape by with a close win against the 31-year-old DeLuca (24-1, 13 KOs).

After 14 months out of the ring, Brook is returning this Saturday night at the Sheffield Arena in Sheffield, England. The Brook-DeLuca contest will be shown on DAZN in the U.S, and Sky Sports in the UK.

If Brook wins, Hearn wants to try and get him a fight against Amir Khan, IBF/WBA junior middleweight champion Jeison Rosario or WBO 154-b champion Patrick Teixeira. If none of those fights are available for Brook, then Hearn plans on matching him against #3 WBO Liam Smith in a World Boxing Organization 154-lb title eliminator.

Hearn: We’ll find out if Kell Brook is ‘DONE’

“Kell is talking a big game, and to make a big change in your life, you’ve got to accept what’s happened previously,” said Hearn to IFL TV on Brook talking of rejuvenating himself. “To hear him say, “I’ve cut corners, and have not been disciplined.’ Those are all the things that we know, but once you accept it, you can move on. And I feel like he’s done that now.

“He’s got a little bit of spirituality as well,” said Hearn on Brook. “Maybe he’s found God or something like that. He’s been through some dark times. Just because people don’t necessarily talk about it, it doesn’t mean that they don’t go through dark times themselves.

“I believe he had done that. He’s talking all the right things, but if you’re not the fighter you were, it doesn’t matter what you say,” said Hearn in commenting on all the bold talk coming from Brook. “If your legs start deceiving you, if you’re not as sharp as you were, and your timing goes, it doesn’t matter if you want it more now than ever, you’re done, and that’s what we’re doing to find out on Saturday,” said Hearn questioning whether Brook still has it.

Hearn is saying what a lot of boxing fans have been saying about Brook. The fans think Brook is saying a lot of positive things about how he’s improved now that he’s working harder, but that not necessarily be the case.

Before Brook’s fights with Errol Spence, Gennadiy Golovkin and Michael Zerafa, he bragged about how he was in great shape. Unfortunately, Brook faded in each of those matches.

“The reason why we chose DeLuca is he’s tough as nails, he’s going to push Kell all the way,” said Hearn. “It’s a massive opportunity for him, and so we’ll find out what Kell’s got left. You’re not not going to know after Saturday night if Kell Brook is the same fighter, because he’ll have to be.

“He can’t afford to win this fight, scrape through it, get off the floor,” continued Hearn on Brook. “You know what I mean? He’s got to look great. He’s talking like he’s going to be great, so let’s see if he can put on that special performance that he says he can,” said Hearn on Brook.

“I expect a great performance by DeLuca,” said Hearn. “I’ve had him on three of our shows. Always in good fights. He’s a good honest pro, and ex-Marine, and he’s an absolute machine. And he’s as fit as a fiddle. Again, it’s going to be interesting,” said Hearn in ravning about DeLuca.

If Brook can’t dominate DeLuca, then there’s no point in him staying at 154. Brook would then need to decide whether to retire or move back down to 147, if possible.

“It’s a big 154. All of a sudden, we’ve spent the whole of Kell Brook’s career worrying about weight, and now he’s on weight at the pressor,” said Hearn. “He’s not been on weight his entire career. So is he a 147 when he’s living the life? Do you know what I mean?

It’s possible that Brook can make 147, but it would require him to train year round, and he’s not done that. Even before this fight with DeLuca, Brook ballooned up in weight. He took the weight, but he’s still looked drained this week in getting down to 154.

If Brook didn’t overeat between fights, and if he exercized hard each day, he could probably make 147. But it’s unclear if Brook has got the willpower to train hard in between fights, and control his eating. Brook gets fat just like Ricky Hatton used to do.

“The reason we went down the WBO round right now the champion is [Patrick] Teixeira, who is fighting the Brian Castano, the mandatory,” said Hearn about Brook working the rankings with the World Boxing Organization at 154. “At number 2 is Liam Smith.

“So we want to get in the position, if we take the Liam Smith fight, that’s a final eliminator for the world title to make Kell Brook the mandatory,” said Hearn. “I really feel like Kell Brook against Liam Smith is a brilliant, brilliant fight.

“That’s the fight we’re aiming for if we can’t land the super fights for both of those guys [Brook and Liam],” said Hearn in talking about a fight between Brook and Liam.

“So if we can’t get Khan, if we can’t get [Jeison] Rosario, if we can’t get Teixeira straight, we got to look at eliminators. And one of them against Liam Smith is a great British fight that I’d really like to see. It’s a cracking fight,” said Hearn in laying out his plans for Brook.

It’s predictable that Hearn is moving Brook towards a title shot against WBO 154-lb champion Teixeira, because he’s viewed as the weakest of the champions in that weight class. It would have said a lot of Brook was trying to get in position to challenge WBC champion Jermell Charlo.

Liam Smith already lost to former WBO junior middleweight champion Jaime Munguia by a 12 round decision in July 2018. Now he’s trying to get another title shot.