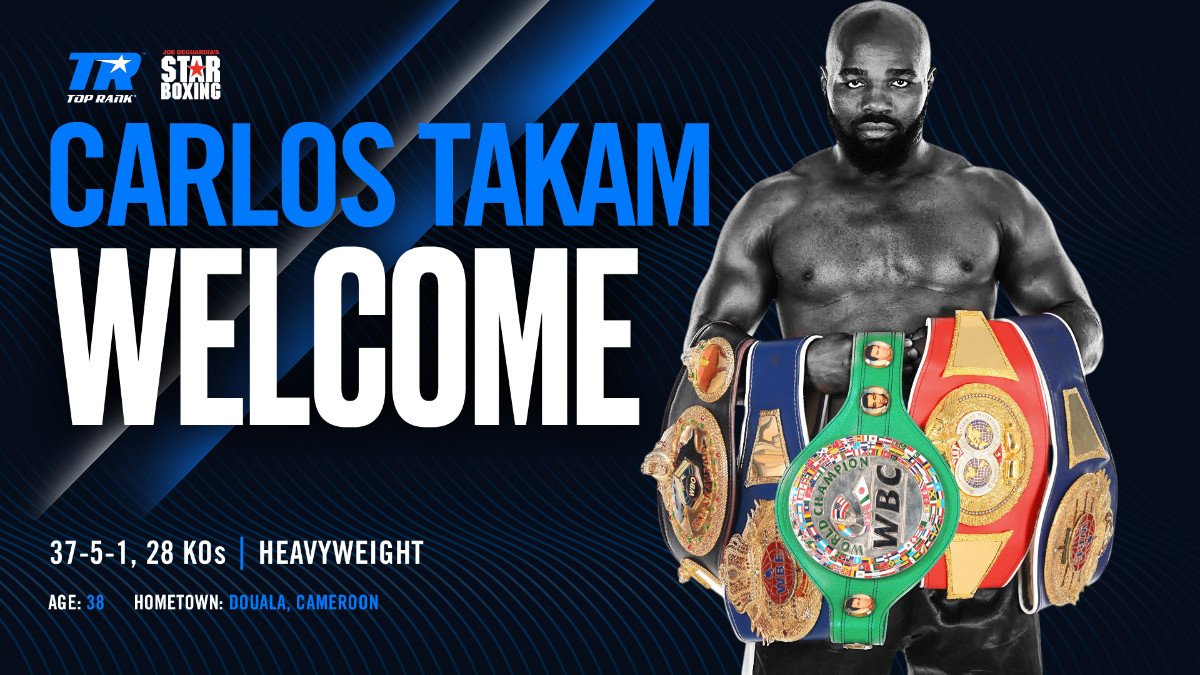 Boxing fans were already in for a treat when Star Boxing announced the return of CLETUS “THE HEBREW HAMMER” SELDIN (Shirley, NY 24-1 20KO’s) at The Paramount on February 28 at “Rockin’ Fights.” The card just really tipped the scales and has become heavier. Former world title challenger, and highly regarded world rated heavyweight, CARLOS TAKAM (37-5-1 28KO’s) will make his second appearance in the United States under the Star Boxing banner, at the critically acclaimed “Rockin’ Fights” series when he takes on FABIO MALDONADO (Sao Paulo, Brazil, 26-3 25KO’s).

Maldonado enters with 26 victories, 25 of which came by knockout. As an amateur, Maldonado had an impressive record of 40-5 with 27 KO’s in his native Brazil, winning the Sao Paulo Amateur State Championship (2000 & 2001) and the Jogos Abertos do Interior Amateur Tournament Gold Medal (2001). Turning professional, Maldonado has had a diverse combat history, fighting both as a mixed martial artist for the UFC and as a professional boxer.

As a professional boxer, Maldonado has challenged for the NABF heavyweight title, as well as the WBA International Heavyweight title. A true combatant, Maldonado has not shied away from top talent, including bouts against #7 WBC world rated heavyweight, MICHAEL HUNTER (18-1-1 12KO’s) and undefeated Ukrainian, OLEKSANDR TESLENKO (16-0 12KO’s).

Takam had this to say about his second fight in the US, “I’m looking forward to this year and cannot wait to get started. I am sharp and ready at any time for a title shot.”

Trainer of Takam, DWIGHT YARDE believes the time is now, “I can’t wait to see Carlos start 2020. Star Boxing is keeping us busy, and I know we will get that title shot. This is our time!”

Star Boxing CEO, JOE DEGUARDIA is equally as excited for Takam’s future, “when we signed Carlos, we knew he had the ability to fight any heavyweight in the world. I’m pleased we will be bringing such a quality heavyweight to Long Island” DeGuardia continued, “we believe this is the start to a great year for Takam, and I am looking forward for what is to come.”

In the highly anticipated main event CLETUS “THE HEBREW HAMMER” SELDIN (Shirley, NY 24-1 20KO’s) makes his return to where it all began and has Long Island buzzing. Seldin will be defending his NABA Super Lightweight Title against Colombian veteran HUMBERTO “METRALETTA” MARTINEZ (Monteria, Columbia 33-9-2 17KO’s).

“Rockin’ Fights” 38 is presented by JOE DEGUARDIA’S STAR BOXING in a thrilling night of fights from The Paramount in Huntington, Long Island. For more information follow @StarBoxing and join the conversation using #RockinFights.

Takam, 38, will make his Star Boxing/Top Rank debut on an ESPN platform in early 2020.

“Carlos Takam is an exciting, world-class heavyweight who always makes for outstanding fights,” said Top Rank chairman Bob Arum. “I look forward to working with Joe DeGuardia and his team, as we believe Carlos has what it takes to reach the top of the division.”

“Big thanks to my promoter Joe DeGuardia of Star Boxing and many thanks to ESPN and Bob Arum,” Takam said. “I am grateful and excited for the opportunity in my quest to become the heavyweight champion of the world. I would like to thank my team for the great job they are doing and all my fans all over the world for their support.”

Said DeGuardia: “Carlos and I are pleased to be joining forces with Top Rank and ESPN. Carlos will have all the opportunities needed to rise to the pinnacle of the heavyweight division, and we are certainly looking forward to 2020.”

Takam (37-5-1, 28 KOs) is a 14-year pro who has been a contender for the better part of a decade, notching wins over former world title challengers Tony Thompson, Francois Botha and Michael Grant. He challenged Anthony Joshua for the unified heavyweight title on October 28, 2017, putting forth a respectable effort before being stopped in the 10th round. He has won two in a row since a knockout loss to Derek Chisora, and on September 14, he made his U.S. and Star Boxing debut, decisioning Craig Lewis over 10 rounds in Monticello, New York.

Takam got late start in boxing

Born in Cameroon, Takam didn’t begin boxing until his early 20s. He represented his home nation at the 2004 Athens Olympics, advancing to the round of 16. Takam spent most of his early professional career fighting in his adopted home country of France, building a 29-1 record before his HBO-televised draw versus Mike Perez in January 2014. Three of five defeats have come against fighters who are currently ranked in the top 10 by both ESPN.com and Ring Magazine. The rejuvenated Takam now has sights set, once again, on the division’s elite.