Dillian Whyte vs. Alexander Povetkin possible for May 2 in Manchester 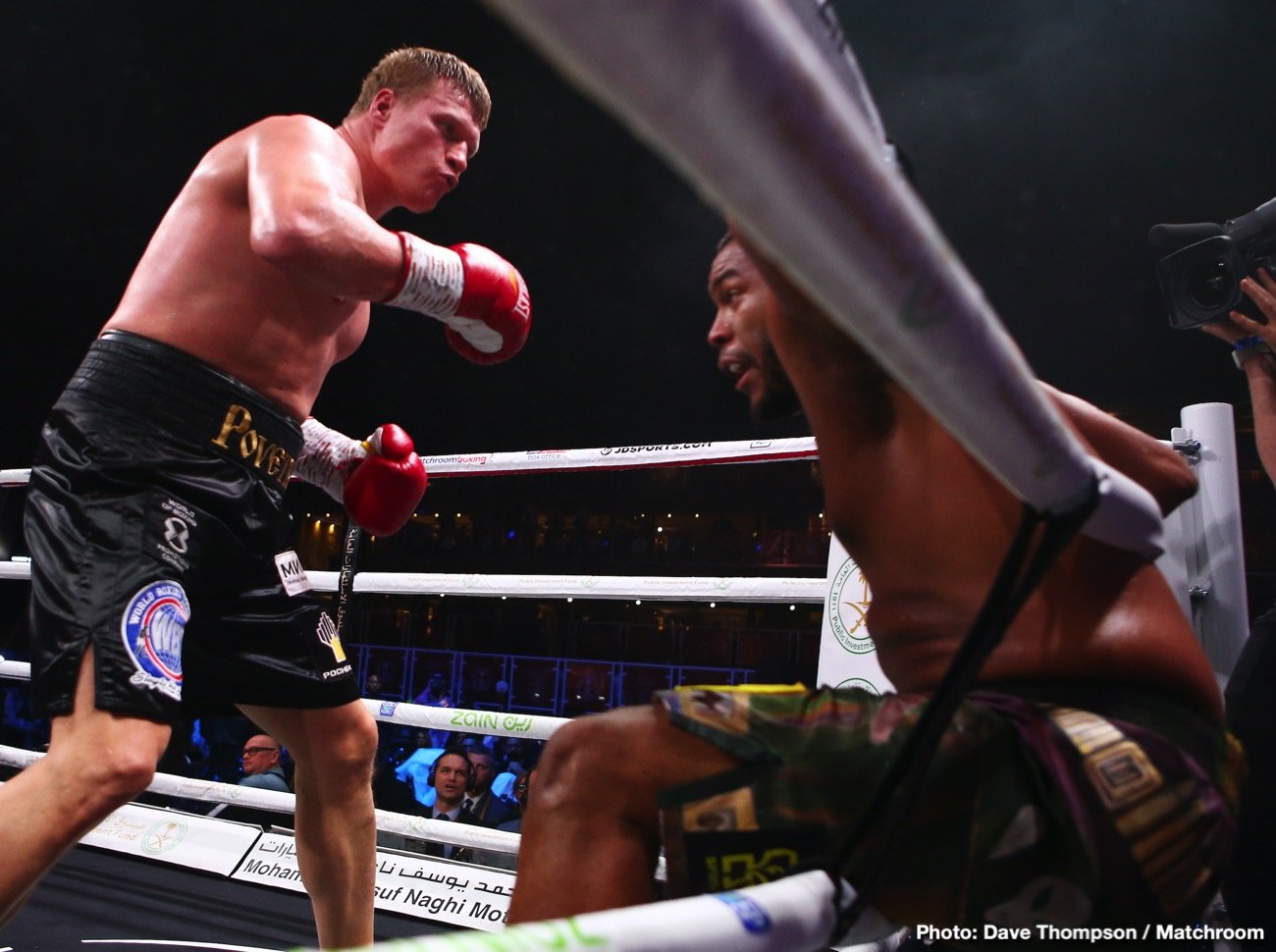 By Kenneth Friedman: Interim WBC heavyweight champion Dillian ‘The Body Snatcher’ Whyte and former WBA champ Alexander Povetkin could be taking place May 2 on Sky Sports pay-per-view in Manchester, UK. @MikeCoppinger is hearing this is the date and the potential venue for the fight.

Staging the Whyte-Povetkin fight on May 2 suggests that it’ll be shown along with the Canelo Alvarez vs. Billy Joe Saunders, which is a match that is currently being negotiated at light speed. Whyte vs. Povetkin would make for an interesting fight to be paired with that fight. There’s no chance that Canelo will come to England to face Saunders. That would make it a split-site broadcast.

Having Alvarez vs. Billy Joe and Dillian vs. Povetkin both shown on the same night on Sky Box Office would make for a thrilling broadcast. By putting those two fights together, British boxing fans will have less reason to complain. If it was just Whyte vs. Povetkin, that would be a tough sell to the British public. With Povetkin coming off of a draw, and Whyte not a world champion, it wouldn’t make sense for this to be the main attraction on Sky Box Office on May 2.

This is a 50-5- fight between two equally matched heavyweights. Povetkin, 40, is nine years older than the 31-year-old Whyte, but he’s fighting roughly on the same level.

Whyte (27-1, 18 KOs) is in a position where he cannot afford to lose the fight owing to the hard work he’s done to earn the mandatory position. All Dillian needs to do is win his two fights in 2020, and then he’ll be battling for the WBC title in 2021. His mandated title shot is expected to be called in the first half of 2021.

Povetkin (35-2-1, 24 KOs) looked shaky at the start of his last fight against Michael Hunter on December 7 on the Anthony Joshua vs. Andy Ruiz Jr. II card in Saudi. The 31-year-old Hunter (18-1-1, 12 KOs) came storming out of the gate in round one and had Povetkin hurt after he unloaded a flurry of punches on him.

Hunter was unable to sustain the same pace in the remainder of the fight, and Povetkin took over and fought well enough to get a 10 round draw. There were some boxing fans that felt that Povetkin had done enough to deserve the win, but the judges were impressed with the high work rate of Hunter.

Besides being the older fight and giving the home advantage to Whyte, Povetkin will also be the smaller guy. He weighed in at 226 lbs for his fight against Hunter. While Povetkin’s low weight wasn’t a problem against the 229-lb Hunter, it could be a problem against Dillian, who is often close to 260 for his matches.

That’s when Whyte is in shape. When he’s not in the best of condition, then we could see him in the 260s. In Whyte’s last fight against Mariusz Wach, he weighed in at 271 lbs, and he struggled. That’s not a good weight for Whyte, and he obviously knows that he can’t afford to come into the Povetkin fight in that kind of condition.


« Boxing legends give predictions on Wilder vs. Fury 2