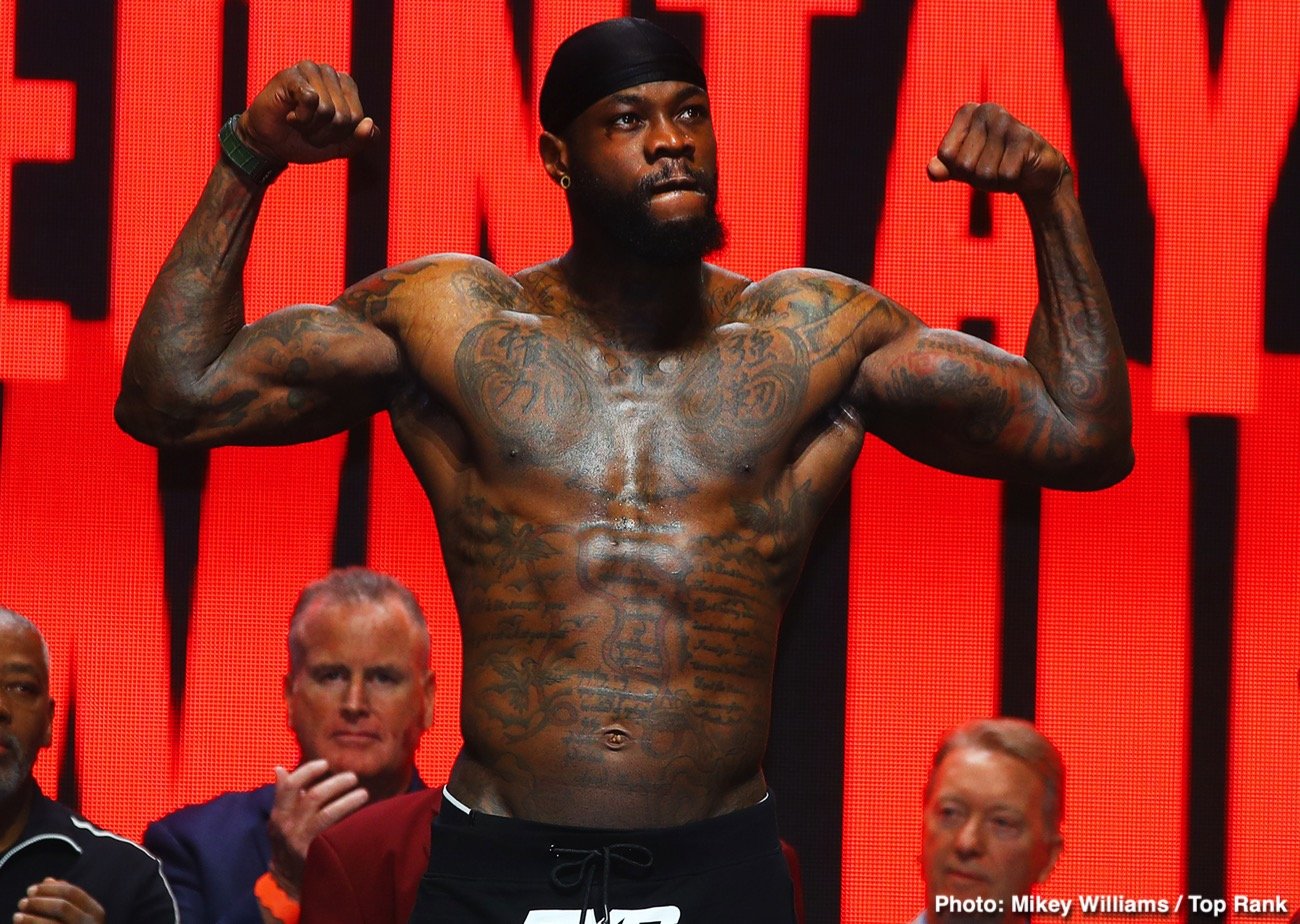 By Dean Berman: Deontay Wilder says he’s heard information about Tyson Fury’s cut having re-opened during sparring for this fight. Wilder says that’s why Fury chose to wear sunglasses and a hoodie at the final press conference this week. He was trying to his eye.

Fury’s right eyes sustained an awful cut last September in his fight against Otto Wallin. The cut required 46 stitches to close. The ringside doctor let Fury fight with the massive cut, but he probably should have pulled the plug on the fight as soon as the gapping cut occurred in round 3.

Wilder (42-0-1, 41 KOs) states that he hopes Fury’s cut DOESN’T open because he wants to let the fight go on long enough for him to knock him out.

“The cut that Fury got in his last fight is going to play a big factor in this fight,” said Wilder on his social media about Fury. “I heard it got re-opened in sparring, which is why he was wearing a hoodie and the shades at the press conference. If I cut it open again, it’s going to be a mess, and we’re going to see what happens after that,” said Wilder.

If the cut opens, it would limit some of the things Fury can do in the fight. For example, instead of Fury brawling with Wilder, he would need to stay on the outside and be evasive much of the time. It would be too much of a risk for Fury to exchange with Wilder. Not only could the fight be stopped due to the cut, but Fury would also be vulnerable to getting hit by a shot from Wilder that he doesn’t see coming.

Wilder wants fans to get their money’s worth

“Hopefully, it won’t open, because I don’t want this fight to stop,” said Wilder. “I want people to get their full money’s worth, and I want it to last all the way until I knock him out on the canvas. We’ll see what he does when he hits the canvas this time. And we’ll see what his body does,” said Wilder.

With the fight being on pay-per-view, boxing fans would be angry if the Wilder vs. Fury 2 fight is stopped on a cut. It’s important that the contest plays out the bitter end, be it a knockout or a decision. A cut would rob the fans from getting a chance to see who the better fighter is. Wilder wouldn’t receive credit for winning on a cut stoppage, because this was a preexisting injury that Fury had.

“We saw his eyes rolling from the back of his head, and we saw the veins pulsing from his neck, and we saw his body stretched out on the canvas like a murder scene. This big bird rose from the dead,” said Wilder.


« Dillian Whyte vs. Alexander Povetkin possible for May 2 in Manchester