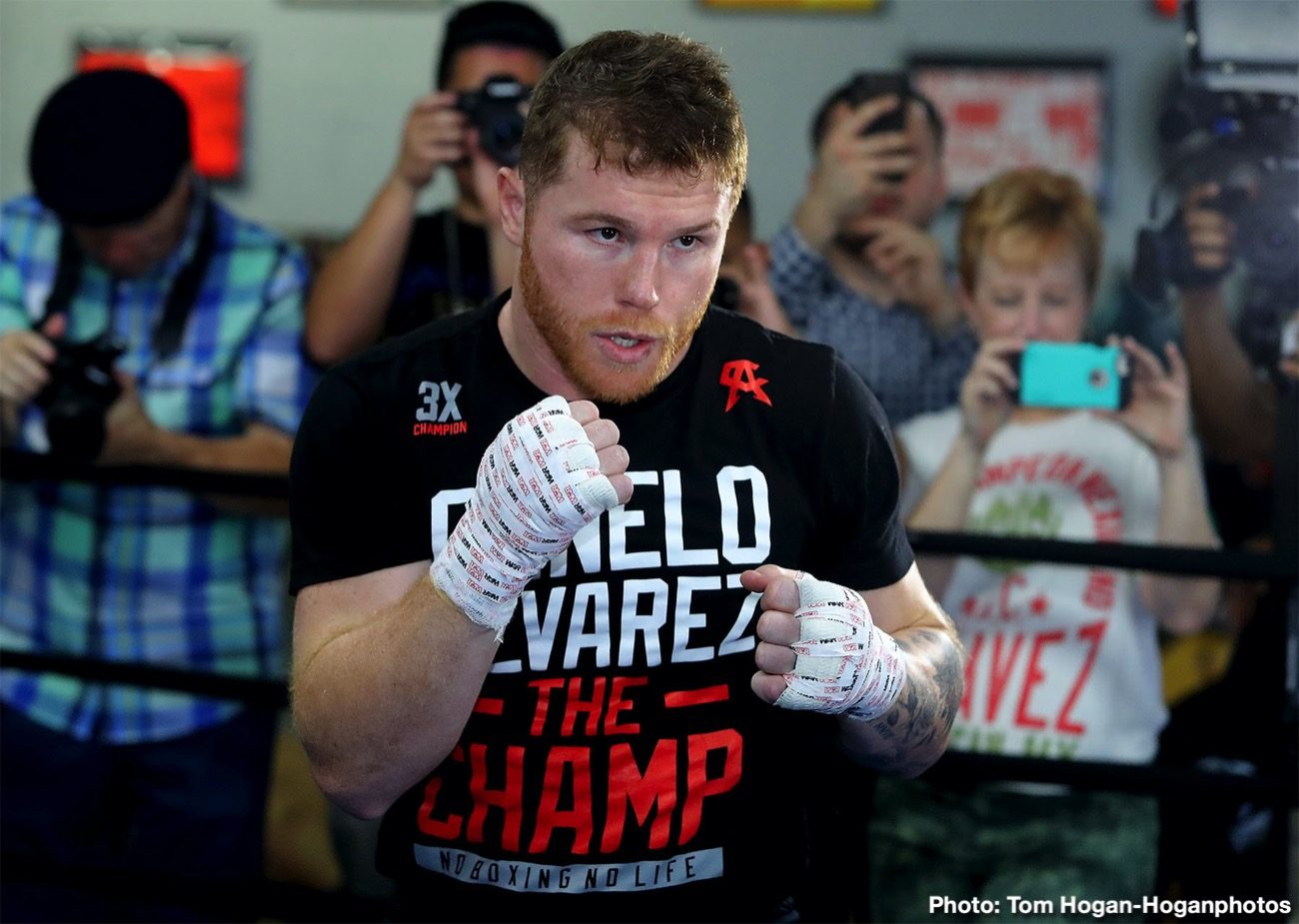 By Scott Gilfoid: Oscar De La Hoya of Golden Boy Promotions has set a Monday deadline for Matchroom Boxing promoter Eddie Hearn to agree to the offer that he’s given to his fighters Billy Joe Saunders and Callum Smith for one of the two to face Canelo Alvarez on May 2.

Hearn has a tough decision to make

De L Hoya says if they don’t agree to the offer, then Canelo (53-1-1, 36 KOs) will move on to the other “4 other guys” he’s also in negotiations with. If De La Hoya is serious about having 4 additional fighters that he’s negotiating with, he may need to move on this Monday, because Hearn is sounding like he’s intractable.

Hearn obviously wouldn’t be so stubborn and unyielding in the negotiations if he didn’t believe that Golden Boy has few good options for Canelo’s next fight on May 2.

The Matchroom boss Hearn believes he’s negotiating from a position of strength, thinking he’s got De La Hoya and Canelo boxed into where they’ll ultimately HAVE to meet the asking price to get Saunders or Callum to agree to a fight. Of course, if Hearn is wrong, his fighters will have missed their chance to fight Canelo, and it’s possible that they won’t be given a second chance in the future.

It doesn’t look like Smith or Saunders are going to agree to the offer made to them by Golden Boy for a fight against Canelo, judging by Hearn’s comments.

Eddie says that he was told by Callum and Saunders a specific number they both want before they’ll agree to the fight with Canelo, and he’s following their instructions.

Hearn says there’s a set market price out that fighters expected to get for a fight against Canelo Alvarez, and he feels that Golden Boy is resisting paying that price.

Eddie thinks that that Golden Boy and Canelo are trying to get to make as much money as possible by offering under the market price for a fight against the Mexican superstar. He’s not going to agree to accept what they’re offering his 2 fighters, Smith and Saunders.

“If you guys don’t take it, then we’re moving on to somebody else, but he will fight in May,” said De La Hoya about Canelo Alvarez. “Time is running out. I have until Sunday, tomorrow [Saturday] or Monday at the latest or else I’m moving on,” said De La Hoya.

“There have been multiple offers out there, and they’re all on the table. You know, it’s funny because everybody talks a big game. ‘I want Canelo’ and ‘I can beat Canelo’ That’s BS. Nobody wants to fight Canelo. They’re all afraid of him. He is the superstar of boxing, and if you fight him, you’ll make the most money.

So there it is. De La Hoya is making it clear that Hearn, Smith, and Saunders have until this Monday, February 17 for them to agree to the deal that he’s offered them or the Canelo fight. If they choose to push for more green, then De La Hoya will move the Canelo train to another city, and look to set-up a fight with one of the other 4 options he has on the table.

You hate to say it, but Canelo can do better than Saunders or Smith by fighting almost anyone.

De La Hoya isn’t saying who Canelo’s other 4 options are for May 2, but it’s likely these guys:

Hearn: The Market value for Canelo fight has gone up

“Yes, there was an offer. I’m not going to start slating offers, and saying it was a lowball offer and stuff like that,” said Hearn to IFL TV on the offers Golden Boy Promotions made to Matchroom for a fight between Saunders or Smith with Canelo.

“We know the market value. We’re not muppets. Unfortunately for Golden Boy, that market value has been heavily inflated in the last 12 months for a variety of reasons.

“Mainly because there’s been a series of new broadcasters coming in and investing in the sport. And Canelo is up there with Joshua as one of the two biggest stars in the sport. we have the same problem with AJ.

“The deal that we’re going to have to pay Kubrat Pulev. We’d like to get him cheap, but unfortunately, the market price has dictated the sport.

“And Canelo is up there with Joshua as one of the two biggest stars in the sport. Unfortunately, the market has dictated the money, and the offers they made, not just to Callum Smith, but to Billy Joe Saunders as well, they weren’t good enough. Oscar De La Hoya, you can’t really come out and say, ‘What’s wrong with these guys? They’re turning down these offers,'” said Hearn.

It doesn’t matter what Harn says about the so-called market price for a Canelo fight. Golden Boy is offering Smith and Callum what they want to offer them, and they’ll either accept it or not. It’s understandable why Golden Boy might not want to offer those two guys the same thing that Canelo’s last two opponents Daniel Jacobs and Sergey Kovalev were given, which was $12 million.

“Do you think that Oscar De La Hoya would have accepted back in the deal an offer that he felt didn’t represent the value of him as a fighter? Of course not. Again, we’re not a million miles apart, but the offer [from Golden Boy for Callum and Saunders] wasn’t good enough.

“It was a little bit of a one-sided story, and that’s why I went back to Dan Rafael and said, ‘Billy Joe and Callum Smith received offers. They want the fight more than anything, and they will take less than what they think they should get, but they will not take what you offered.

“So let’s talk.’ As of yet, there’s just been that one offer. Maybe he’s frustrated,” said Hearn about De La Hoya. “May the 2nd is approaching, and they’ll want to get it boxed off next week. So once again, I think Oscar is maybe frustrated because the market has moved,” said Hearn.

De La Hoya probably isn’t frustrated at the market. He clearly views Smith and Saunders are lackluster opponents for Canelo, so he’s not going to offer them top dollar. I mean, it’s simple as that.

Saunders and Callum aren’t household names, and they both bring little to the table in terms of their ability to sell the Canelo fight. Besides the lack of charisma for Callum and Smith, they have no experience against talented fighters in terms of having been seen by U.S fans.

“It’s the same problem that Anthony Joshua has got. People know what Andy Ruiz got, people, know what Jarrell Miller got. ‘I’m the same, right?’ Callum Smith will be looking at it, saying, “I’m WBA world champion, I’m WBC Diamond champion, I’m Ring Magazine champion. So, you’ve got the opportunity Canelo to come up, and unify and win the Ring Magazine title from me.

“So I’m quite valuable in this fight, and I believe the offer you made didn’t represent that offer, that’s all.’ It’s no beef. We still want the fight, and we still understand we’re the B-side. We’re hoping and begging. Billy Joe Saunders and Callum Smith, they’re in the same boat.

You have to admit that there won’t be any loss in Canelo NOT fighting Saunders or Callum, because the U.S fans aren’t asking or either of those fights. Callum lacks charisma, and his resume is completely void of names. As for Saunders, his resume is empty as well, and his fighting style is the opposite of what American fans like to watch in a fighter.

“Basically, it’s no secret. What does Golden Boy want in this situation? If Canelo is happy to fight Billy Joe Saunders and Callum Smith, who’s going to get the fight? The one that takes less money. They’re promoters, and they’re trying to make as much money as they can for themselves, for Canelo and for everybody, right?

“When Billy Joe says he’ll fight for free, I don’t think he quite means that. I don’t believe those two have been unreasonable with their demands. So we’ll see what happens. I believe one of them will get the fight. I’m not going to tell Golden Boy what to pay or convince Canelo to take one or the other. He’s happy with both.

“DAZN has approved both. So now it’s just down to Golden Boy to put an offer together that either fighter will accept. It’s not rocket science, but I’m not going to talk to Golden Boy scheming who’s going to get it. I’ve got two guys.

“They’ve both told me the price they want to deliver to Golden Boy, and that’s what you’ve got to pay for them. We’ll negotiate and do a deal. Whoever takes it first or ultimately whoever takes it for less money will get the fight,” said Hearn.

Hearn digging his feet into the sand in negotiations

It doesn’t sound like it’s going to end well for Callum and Smith in the negotiations with Canelo. You wonder if it would be better if they had a secondary negotiator that could take over for Hearn to work on the deal with Golden Boy. Like in baseball, you’ve got relief pitchers that come in when a pitcher is getting pounded by the hitters. Maybe Hearn needs a relief pitcher to come in and try and save the deal for Saunders or Callum.

It would be understandable for Hearn to be talking like this if he was in negotiations for one of his Anthony Joshua fights, but definitely not with Saunder or Callum. Hearn needs to step back and look at the fighters that he’s got. Those two are not in the class as Joshua is his weight class.

It’s likely that Hearn is so used to being the A-side in negotiating Joshua fights that he can’t see clearly when he’s negotiating fights for his less popular fighters like Callum and Saunders. For that reason, Hearn is likely going to mess up the negotiations for the Canelo fight with his ham-handed approach to making the deal.


« Ryan Garcia: ‘I’m going to SHOCK the world in 2020 when I beat Linares, Campbell and Gervonta’