Crawford says Errol Spence will ‘CRY’ after he knocks him out

By Chris Williams: Terence Crawford took to social media on Sunday proming that the day will come that he’ll knockout IBF/WBC welterweight champion Errol Spence Jr. and leave him in tears in his car afterwards.

It’s surprising to see Crawford so worked up. Heck, a lot of boxing fans thought Crawford was fine with NOT getting fights againt the PBC welterweights. I mean, why would Crawford re-up with Top Rank if he wasn’t good with the situation? Crawford could have gotten fights against PBC welterweights ages ago if he’d signed with Premier Boxing Champions, but he stayed loyal to Top Rank.

After 12 years as pro, it looks like Crawford  has reached the tipping point where he’s finally exploding at not getting the fights he wants against the PBC fighters.

“Keep defending him because I’m tell all y’all now and I mean what I say, when that day comes when I knock him [out], all I want all you all to keep that same energy because he is going to cry in the car,” said Crawford on his Twitter about Spence. “He wasn’t built for this s— I got over here just watch me show the world.”

“And stop using the f—- promoters, managers and advisors for that weak a– excuse you’re all doing. They work for us. You’re all dumb mf. If you really want a fight, you tell them. I don’t give two f—.  That’s who I want to fight. Let your n— drop.  You say you your own boss @ErrolSpenceJr,” said Crawford.

Crawford must have been seeing red when he posted this Tweet about Spence crying.  That is to say, it doesn’t sound like Crawford has his feet on the ground right now with the stuff he’s dreaming up. It looks like Crawford being locked out of fights against PBC fighters has finally gotten to his last nerve, and he’s coming unglued at the seams.

The question is, why has  Crawford (36-0, 27 KOs) picked this time to go after Spence? The Texas native is still recovering from his car crash from October 10, and he doesn’t look healthy enough to fight anyone, least of all Crawford.

Spence just got out of the hospital not long ago, and Crawford sounding like he’s not been keeping up on the news.  Why pick on Spence right now with him on the shelf recovering from his high speed crash of his 488 Ferrari Spider on October 10.

y’all can believe the bs if you want ion 🦆 nothing

Crawford is like a bow string that has been pulled back for 32 years, and now he’s finally letting loose with the anger.

Earlier on Sunday, Crawford posted a clip on social media of his friend trashing the PBC welterweights one by one. Crawford’s friend got really worked up in trashing the PBC fighters, and he was like a cheerleader. He was so worked up with emotion that his voice was literally cracking, and he sounded like he was ready to burst into tears towards the end. Crawford was there with him and giving him tips every once in a while.

It was pretty funny to listen to. The overall impression that a lot of boxing fans got from watching that clip is that Crawford is starting to get desperate. He wants the PBC fighters to cross the pond and face him, but it’s not happening. Porter tried to throw Crawford a bone by offering him a fight, but he didn’t want it. 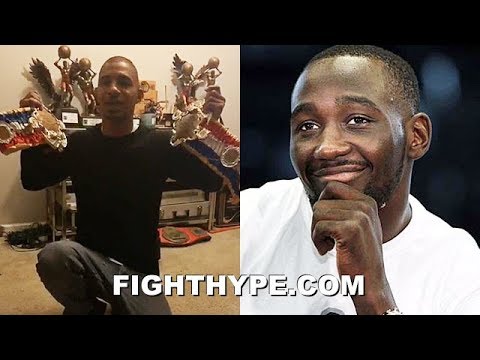 This video was all over the place. Whoever the guy was that was smothering Crawford with compliments, he made him look NEEDY. The guy started out angry, and then towards the end sounded like he was about to start weeping. It was so funny, but it scary bad. Its hard to believe Crawford actually posted this.

What Crawford needed was someone a little more level-headed to help build his credibility by telling the viewers how great he is. For that to work, it has to be someone that the boxing public is familiar with. What Crawford needed was for him to get Tim Bradley to say nice things about him again like he did after his recent fight. That would be a load of laughs for fans.

Errol wanted to face Crawford before his accident

Spence wanted to fight him in 2020, but his terrible car crash has put that fight on the backburner.  Although Spence came out last month and said in an interview with fox that he wants to fight Crawford, but he didn’t sound well at all. Spence sounded like he was slurring his speech, and he doesn’t sound like he’s ready for a serious fight in 2020. Right now, it’s not a good idea for Spence to fight anyone in the top 10 until he finds if he’s okay.

Porter offered Crawford a fight but he didn’t want it

Shawn Porter was asking Crawford out, and he didn’t want no part of fighting him for some reason. Was Crawford scared of having to mix it with ‘Showtime’ Shawn or what? Porter is one of the Premier Boxing champion fighters, and he definitely wants to fight Crawford.

The simple solution would be for Crawford to take the fight with Shawn Porter, but he doesn’t want to fight him. That’s the whole problem. There’s risk for Crawford against Porter, and if he loses to him, then he forget permanently about fighting Spence.

If he doesn’t get a fight against one of the PBC fighters soon, he may never get a shot. As it is, that boat has probably sailed for Crawford.

Crawford is heading towards the latter of his boxing career, and it’s now or never for him. If he doesn’t get a fight against one of the PBC fighters soon, it may be too late. Crawford will be turning 33 soon, and unfortunately that’s old age for fighters that rely on speed.