Teofimo Lopez – ‘I don’t leave it to the judges’

By Kenneth Friedman: Teofimo Lopez (15-0, 12 KOs) says he’s not going to leave it up to the judges when he faces Vasiliy Lomachenko in their unification fight in April or May of this year. The date and the location of the fight is still being negotiated at this time.

Teofimo wants the fight to take place in New York if possible, and he might get his way. Lomachenko has fought 4 times in New York during his career, and he doesn’t seem to mind being a road warrior.

This is an important fight for Lopez, because he needs a victory over Loma to turn him into a star. Lopez is gaining a lot of news boxing fans with each fight, but he needs a big name like Lomachenko to take him to the next level.

“It’s a feeling that you have never felt before,” said Teofimo to ESPN in describing what was like to drop Richard Commey. “It’s a crack shot.  After the fight, Joe Tessitore, I heard him say, ‘Spaghetti legs.’ It’s just right placement shots, that’s what it is. Timing, and when you crack someone like that, and you see the reaction.

Teofimo destroyed IBF 135-lb champion Richard Commey in stopping him in the 2nd round on December 14 in a statement fight at Madison Square Garden in New York. Lopez dropped Commey with a big right hand to the head in round 2, and then took him out with a barrage of shots after he got back up.

If Teofimo lands a similar shot to the head of Lomachenko, he could knock him out just like Commey.

Lopez doesn’t believe in letting the judges decide the outcome

“Hopefully, we get everything sorted out to make that type of fight happen this year,” Lopez said about the Lomachenko fight. “It’s a new decade and a new year, and I think we started off with a bang.

“New York and the Garden is my home,” Teofimo said when asked where he wants the Lomachenko fight. “But to me, anywhere. I think the fans are going to enjoy the fight no matter where it is.

“What do I do better? Not only do I entertain better, but I think it’s the fact that I go out there, and I figure out the opponent just as he would,” said Teofimo. “But my thing is, I don’t leave it to the judges. I don’t try and look pretty while I’m doing it. I go out there, and I take out my opponent,” said Lopez.

It would be wise for Lomachenko to have his hands up when he faces Teofimo, because he’s got the kind of power to end the fight at a moment’s notice.

Lomachenko tries to entertain with his showboating, but he doesn’t have the punching power that Teofimo does. Loma likes to throw a lot of shots to stop his opponents with his volume punching. In a lot of cases, Lomachenko forces his opponents to quit. 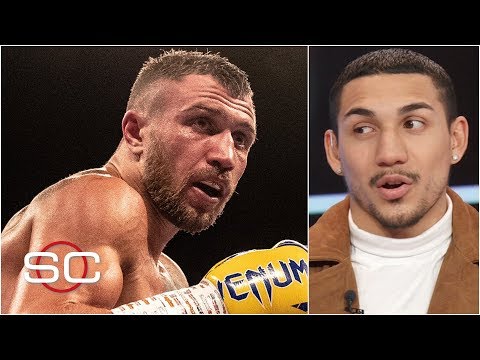 Lomachenko was trained to be a champion from early on

“It was a plan for him to be a world champion right from the beginning. His father knew exactly what to do,” said Atlas to THE FIGHT with Teddy Atlas. “The drills that he does. He does a lot of drills. Physical drills, technical drills, and mental drills.

Lomachenko was cut out to be a superb fighter, and the training obviously helped. But a guy Lomachenko was destined to be great. His father coached him to bring out the best, and changed his fighting stance to southpaw. That helped him clearly in giving him an advantage over many of his opponents.

“Let’s get right to it better than anybody else And his father had plans and an understanding of putting him through things very early that would prepare him for things later,” said Atlas about Lomachenko.

Against Jorge Linares, Lomachenko suffered a dislocated shoulder, and he was still able to fight effectively. Lomachenko stopped Linares in the 10th round in their fight in May 2018.

Vasiliy got a lot of great training early in life, thanks to his father, who trained to become a world champion. The training paid off well for Lomachenko, as he captured two gold medals in the Olympics, and finished with a 396-1 amateur record.

It had to have been tough for Lomachenko to fight with a dislocated shoulder, but he did it.  That was a fight in which Lomachenko was knocked down by Linares, and he somehow got through to get the victory.

“You don’t have any choice, and you only have this choice that you have to make. It’s not the ocean It’s a lake,” said Lomachenko. “It helped me, and helped Oleksandr Gvozdyk, and Oleksandr Usyk. It’s mentally training. ‘Don’t be nervous, because you have another hand,'” Lomachenko said on what his father/trainer told him after he suffered a dislocated shoulder in his fight against Jorge Linares.

Being trained to swim for a long period of time in a lake taught Lomachenko how to go passed the point of exhaustion to get the victory. It must have been difficult for Lomachenko to train like that, because there’s risk involved in swimming in a lake.

“My father changed me so my brain can work both sides. I never stopped training with boxing,” said Lomachenko. “After school, I would dance, and after dance, I would go to boxing training. I think I was 10 or 12 years, and I used dancing a couple of years. I don’t like it, but I used it, because my father was playing with me.

“‘If you do not use dancing, then you can’t train with boxing.’ He understands that I love boxing, and I want training. He saw my desire, and that’s why he can build me. I can live a second life, and live my life without dancing,” said Lomachenko.

It’s good that Lomachenko’s dad changed his fighting stance to southpaw early, because it would be a lot tougher if he made that move later.

“And with a dislocated shoulder, his right shoulder, which is his most important hand, because he’s a southpaw. That’s his lead hand. 90% of his punches are from there. So now what? Like his father said,” said Atlas. 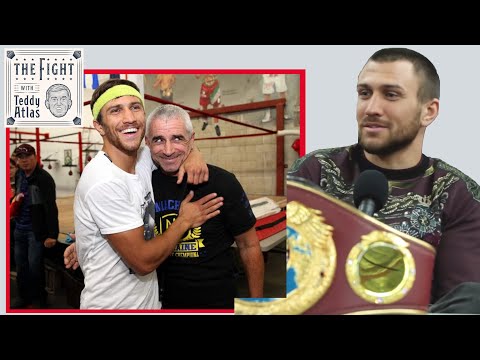 Crawford says Errol Spence will ‘CRY’ after he knocks him out »