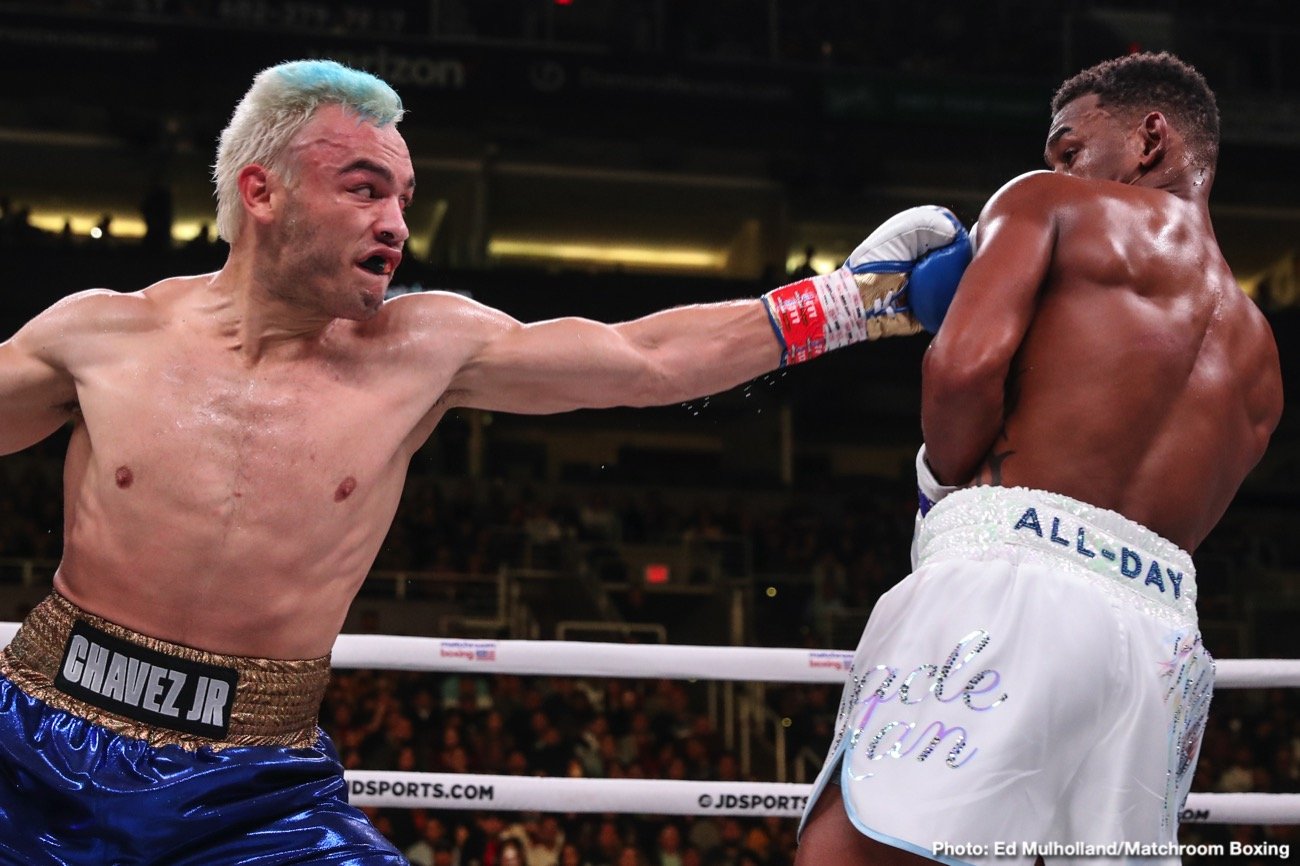 By Dan Ambrose: Julio Cesar Chavez Jr. says he couldn’t breathe out of his injured nose after round 5, and he had no choice but to stop fighting against Daniel Jacobs last Friday night at the Talking Stick Resort Arena, in Phoenix. The 33-year-old Chavez Jr. (51-4-1, 33 KOs) maintains that Jacobs didn’t beat him by fighting.

Chavez Jr. states that Jacobs beat him by fouling him with elbows and head-butts that injured his nose. Despite being upset about the way he lost, Chavez Jr. says he would “Love a rematch” if possible against Jacobs (36-3, 30 KOs).

Unfortunately for Chavez, it doesn’t look like he’s going to get a rematch, as Jacobs’ promoter Eddie Hearn says his next fight will be against either Callum Smith or Billy Joe Saunders. Hearn says Jacobs will fight whichever of those two super middleweight champions that Canelo Alvarez doesn’t pick. The Matchroom Boxing promoter Hearn is convinced that Canelo’s next fight in May will be against Callum or Saunders.

Chavez Jr – I was swallowing blood and couldn’t breathe

“I was fighting a good fight, and I was getting closer. One round closer, I got head-butted, and he cut me above the left eye,” said Chavez Jr. to DAZN about Jacobs. “And then he head-butted me again, and fractured my nose, so I was having a lot of trouble breathing. But I also received an elbow to the nose.

There was definitely a couple of head-butts during the fight, but they appeared to be initiated by Chavez Jr. with the way he was coming forward, trying to bury his head into the chest of Jacobs to throw body shots. Fighting like that is risky, because it makes a fighter susceptible to getting elbowed, head-butted and cut. That’s par for the course with that kind of fighting, but Chavez Jr. should already know that. He’s been fighting this way his entire career, and it’s only now that he’s complaining about being head-butted.

Former WBC middleweight champion Chavez Jr. didn’t used to complain earlier in his career, but he was fighting a lot more often back then. Nowadays, Chavez Jr. rarely fights, and he doesn’t look as comfortable doing it like he did when he was younger. This was only Chavez’s second fight since 2017.

“It was tough, because the referee wasn’t doing anything about it,” said Chavez Jr. “I thought I had fought a good fight, but I just couldn’t continue that way. And I want to apologise to the fans. I would love to have a rematch, but none of that was helping. I got head-butted, he was fighting a dirty fight, and there was no way I was going to be able to win this kind of fight.

“They didn’t even take one point away. He would have been able to continue to do that dirty work, and he never really fought with me,” said Chavez Jr.

Julio won’t be getting a rematch obviously, and his career pretty much over as a big time player. Unless Chavez Jr. all of a sudden is able to turn things around, he’s probably not going to ever get another big fight. It’s hard to imagine that DAZN will want him back on their network after this bad experience.

Jacobs surprisingly said, “This was a good test” in trying to put a positive spin on his fight against Chavez jr. in talking at the post-fight news conference. There’s no way you can say that this was a true test for Jacobs, because the fight ended prematurely. Jacobs will be going into his next fight against Saunders or Callum with what essentially would be a long layoff since his last fight against Canelo Alvarez last May. You can count that as a real fight, but definitely not the Chavez Jr. match.