Canelo Alvarez vs. Terence Crawford at 160 – Arum wants this fight 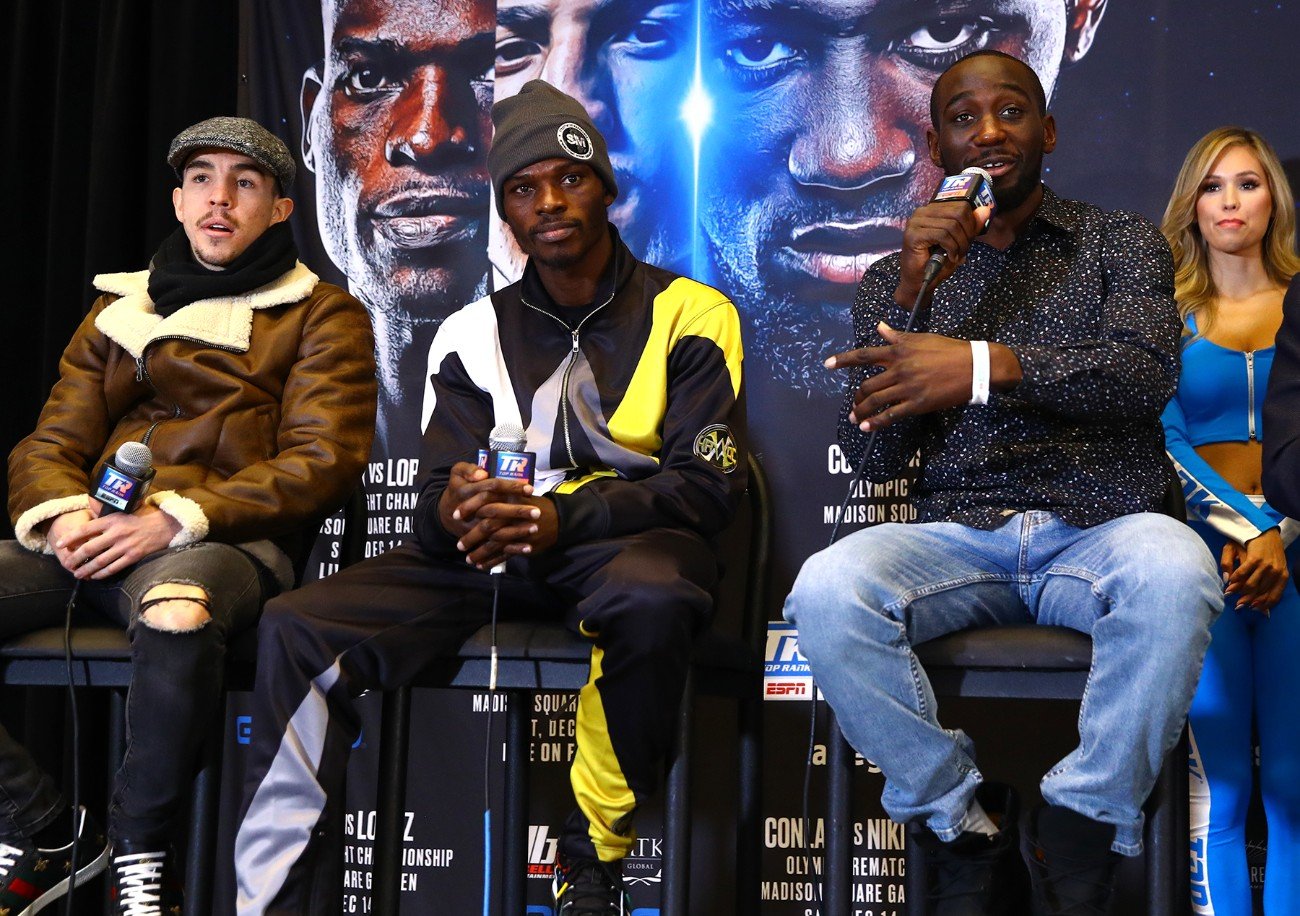 By Sean Jones: Bob Arum has big ideas for Terence Crawford for 2020, and he’s hoping he can set him up with fights against Shawn Porter and/or Canelo Alvarez.

Arum is serious about the three division world champion Crawford (35-0, 26 KOs) going up to middleweight to take on Canelo (53-1-2, 36 KOs) if the Mexican star can make it back it down to 160 to face him. If not, Arum has a number of other options for Crawford to face in 2020. The Nebraska native is not going to move up to 160 unless it’s for a big payday against Canelo.

Crawford will move up to 160 for Canelo fight – Arum

“If Terence wants to fight for another title, we’ll arrange that in going up in weight at 154 or maybe 160. If Canelo can get down to 160, that would be a huge fight. Canelo and Crawford at 160,” said Arum.

This is a fight that would be interesting for boxing fans to watch, but it’s not going to happen. Canelo has never expressed interest in fighting Crawford, and it’s a fight that wouldn’t attract as much interest than a trilogy match against GGG. As such, if Canelo moves back down to 160, it would be to take on Golovkin, but certainly not Crawford.

You never know. Few boxing fans expected Canelo to move up in weight two divisions to take on WBO light heavyweight champion Sergey Kovalev last November. For Canelo to agree to a fight against Crawford, a lot of things would need to change with the Top Rank promoted fighter. He would need to become a bigger name than he is right now, because there wouldn’t be enough interest in a fight between them. With Crawford’s fights being shown on ESPN, and Canelo’s on DAZN, that would make it tough to put a fight together between them.

Terence isn’t serious about going up to 160

Crawford said he was just joking earlier on Wednesday when he said he’d be moving up to 160, but his promoter Arum of Top Rank Boxing is serious about him fighting in that weight class. It’s too bad Crawford isn’t serious about wanting to fight at 160, because he could make good money fighting Canelo and Gennadiy Golovkin. The fights might be hazardous to the thin-framed Crawford’s health, but he’d make a lot of money.

Arum’s immediate goal is to have Crawford face Porter, Spence or one of the light welterweights that are planning on moving up. Former WBA 140-lb champion Regis Prograis, WBC/WBO champ Jose Ramirez and IBF/WBA light welterweight champion Josh Taylor are three guys he’s interested in matching against Crawford.

Arum has big year planned for Crawford in 2020

“He’s fighting a tough guy, don’t right off Kavaliauskas,” said Arum to Fighthype. “But if Crawford wins, as we expect him to do, then we’ve got a big 2020 for him in fights in different parts of the world.”

Arum spoke last year of 2019 being a big one for Crawford, but that hasn’t happened. He’s fought once in 2019 in beating Amir Khan last April in stopping him with a low blow in the 6th, and now he’s about to face Kavaliauskas this Saturday at Madison Square Garden in New York. This isn’t a big fight either. Indeed, you can argue that Kavaliauskas is a step backwards for Crawford.

Crawford only wants Porter at 147

“The only fight that interests Crawford at welterweight, with Spence on the shelf. We don’t know when Spence will be fighting again, and he shouldn’t fight unless he’s fully healed. The only one that is of interest to Terence is [Shawn] Porter. Manny [Pacquiao], even when he was with me, repeatedly turned down a Crawford fight,” said Arum.

Crawford also wants Errol Spence Jr., but his status is unknown since his car crash last October. Arum would likely be more than willing to match Crawford against Danny Garcia or Keith Thurman if those two showed interest in facing him.

“We have all these great junior welterweights moving up,” said Arum. “[Regis] Prograis would be a great opponent, Josh Taylor, Jose Ramirez, all of whom are going to be ready in 2020 to take Terence on.”

Ramirez is signed with Top Rank, and he would obviously be the one that Arum could negotiate a fight with Crawford. Prograis and Taylor might not do it. Those guys might be reluctant to move up to 147, and take on Crawford in their first fight in the weight class. Although Crawford’s first fight at 147 was for the WBO welterweight title, but he had an easy opponent in Jeff Horn. It would be asking a lot of Taylor, Prograis or Ramirez to move up to welterweight and take on Crawford in their first fight.