By Robert Addams: Jeff Horn (20-2-1, 13 KOs) avenged his previous loss to middleweight contender Michael Zerafa (27-4, 16 KOs) by beating him by a controversial 10 round majority decision on Wednesday evening at the Brisbane Convention and Exhibition Centre, Australia.

With Horn, 31, taking massive punishment in the 9th, he came back to drop him twice in the round. The judges scored the fight 98-90, 97-92, 94-94. The 98-90 score for Horn was a little troubling. That score doesn’t make sense for the fight that took place on Wednesday night. Zerafa fought well enough to win a decision, if not win by knockout. To have a judge score it 98-90 for Horn, it doesn’t make sense.

Boxing News 24 had Zerafa winning by two rounds. He landed the better shots, and should have had a knockout in the 9th.

In their fight last August, Zerafa stopped Horn in the 9th round in a one-sided fight.

The referee John Cauchi made a controversial move in the 9th by stopping the action to have Horn’s cut left eye looked at. There was nothing wrong with having Horn’s eye checked out by the ringside doctor, but it was the timing that the referee picked to stop the action.

Horn was on the verge of being knocked out by Zerafa in the round, and the referee chose that time to have Jeff’s cut examined. It was a strange time for the referee to choose to have Horn’s cut examined, as he could have done that after the round. The cut didn’t look any worse than it had been before the round started.

The fight arguably should have been stopped in the 9th round when Zerafa, 27, was batting a BADLY hurt and bleeding Horn around the ring. It was painful to watch him much punishment Horn took in that fight. Again and again, Horn turned his back on Zerafa, and it’s unclear why the referee didn’t stop the contest.

Referee’s timing to have Horn’s cut examined was questionable

You hate to say it, but this fight likely would have been halted by a lot of referees during the 9th, considering that Horn was getting beaten up by Zerafa, and he was defenseless. The fact that Horn turned his back to Zerafa numerous times in the round was arguably enough for the fight to be halted, but the referee didn’t do it.

You’ve got to give Horn credit for nailing Zerafa with a big right hand to drop him in the 9th, because that was a game saver for him. However, the referee’s decision to stop the action when Zerafa had Horn ready to be stopped, it was a highly questionable move. It’s hard not to view that move as playing a big part in the outcome of the fight. When a fighter is on the brink of being stopped, it’s bad timing for a referee to stop the action, and have their cut checked out by a doctor

All in all, this wasn’t the type of performance by Horn that suggests that he would do well against a world champion at 154 or 160. The way Horn fought, he would be knocked out any of the champions at 154 or 160. He lacks the skills and the stamina to compete with the upper tier fighters in those two weight classes in this writer’ view. 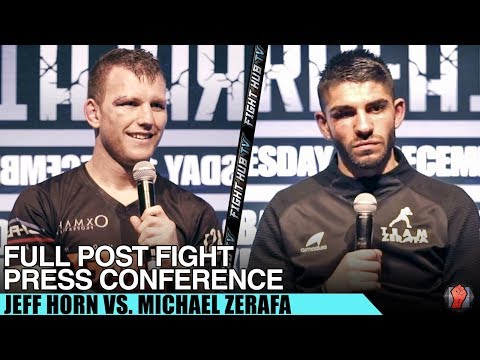