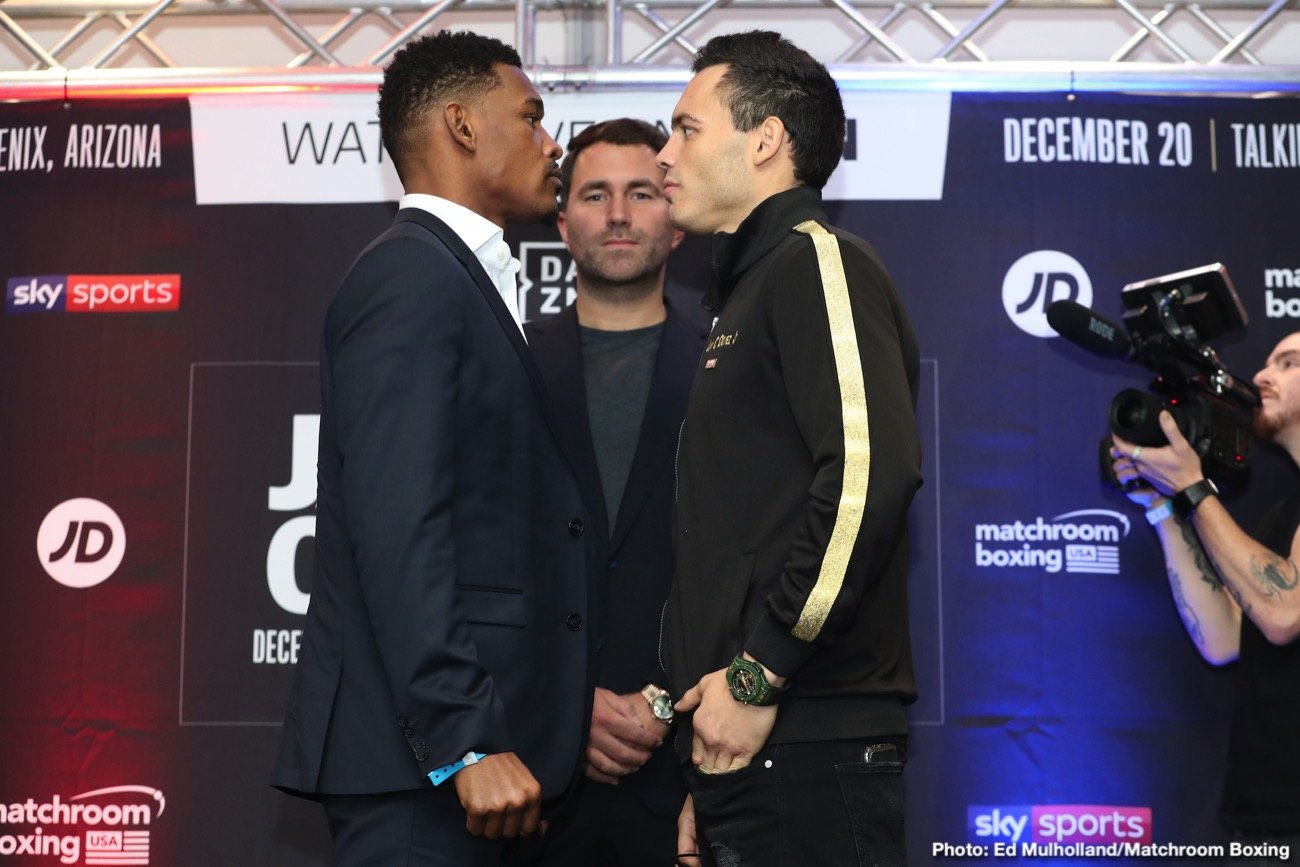 By Aragon Garcia: Former WBC middleweight champion Julio Cesar Chavez Jr. and Danny Jacobs met up for their final news conference on Tuesday to discuss their fight this Friday on DAZN from the Talking Stick Resort Arena, in Phoenix, Arizona. Both fighters had their game face on, and appear to ready war in their scheduled 12 round fight.

Will Jacobs be stronger at super middleweight?

Jacobs, 32, believes that his move up to 168 is going to allow him to show more of his physical skills that he couldn’t display at 160 due to him being drained. We’ll see if that’s the case or not. It sounds more like wishful thinking on Jacobs’ part, since he’s struggled when fighting quality opposition his entire career.

He can’t blame his knockout loss to Dmitry Pirog on being weight drained or being staggered by Ishe Smith on his weight. Those fights took place many years ago, and Jacobs still struggled even then. Hopefully, Jacobs takes the high road and doesn’t come up with a load of excuses if he loses to Chavez Jr. on Saturday. It would be a bad look on Jacobs’ part.

Chavez Jr. (51-3-1, 33 KOs) admitted during Tuesday’s press conference that he doesn’t like cutting weight, which has always been one of his problems. He didn’t look drained at all during the press conference, and that’s a good sign. For a lot of Chavez’s fights since 2010, he’s had an emaciated appearance during the week of the fight.

This time, he looks almost in fighting weight. Chavez Jr. will likely be in the 180s after he rehydrates on Friday, but you can say the same thing about Jacobs (35-3, 29 KOs). He was huge when he fought at 160, and now he doesn’t have to worry as much about cutting weight.

“I’m ready for Friday. I hate diets,” said Chavez Jr. at the final news conference on Wednesday. “I’m not hungry, and I’m ready. I know Danny Jacobs is a very good boxer and a fighter, but I’m 100 percent ready for this fight. I know him. I’m seen him in a couple of fights. I seen him with Canelo, and with Dmitry Pirog, the Russian guy. I’m ready and I come to win this fight,” said Chavez Jr.

This is Chavez’s big opportunity to reinvent himself, and put himself into title contention at super middleweight. If he can take Jacobs’ scalp on Friday, it’ll put him in position to get a crack at one of the champions at 168. Callum Smith, Billy Joe Saunders and David Benavidez would be on Chavez’s target list with a big win over Jacobs.

This is a big step up for Chavez Jr. from his last Evert Bravo, who he destroyed by a 1st round knockout last August. Chavez Jr. has the experience against elite level fighters, so he’s not going to be in shock when he gets inside the ring with Jacobs. Chavez Jr. has these guys during his career:

Jacobs expects to be better at 168

“I look forward to giving a great show,” said Jacbs at the final news conference. “I want to thank Chavez for accepting this fight, and I want to thank his lawyer as well for doing such a great job of allowing this fight to happen. This is going to be a great opportunity for me.

“I’m stepping up to the super middleweight division,” said Jacobs. “I feel like this is the perfect weight for me. I’m only two pounds away from 168, and for me, that’s the first time ever. I’m probably going to eat breakfast on the morning of the fight. I feel strong. My camp is extremely happy.

“I couldn’t ask for a better camp. I’m looking forward to displaying all the skills that I’ve worked on this Friday night,” said Jacobs. “Honestly, when I fought for the middleweight championships, and when I fought at middleweight for the last two years, you guys understand the amount of damage I’ve put on my body trying to make weight.

“I’ve looked well inside the gym, but those last two weeks prior to making weight is where we leave it in the gym,” said Jacobs.

It’s doubtful that Jacobs will be any stronger than he’s been in the past, but if he believes that he will, then it’s good for him. If anything, Jacobs will be sluggish in carrying around the extra weight, because it’s going to put more stress on his cardiovascular system. If Chavez Jr. is able to drag Jacobs into the later rounds, we could see him gas out, and get stopped.

Jacobs should have his eyes open for this fight, and not be delusional about his expectations. For all intents and purposes, Jacobs is on the decline, and he’s not going to get better at 168.

“Now I have the opportunity to carry over those skills, and he rehydrated, and 100 percent, and allow my skills that the team sees to allow the world to see that. I’m extremely happy to have this opportunity. I know the super middleweight division is full of great competition, and I look forward to this test Friday night. God willing we get the victory, and move on to bigger and better things. I’ll see you guys Friday night,” said Jacobs.

Danny will need to be careful against Chavez Jr. that he doesn’t run into something when he’s trying hard to display his skills, because he’s facing a big puncher. Jacobs has never fought anyone that goes to the body the way that Chavez Jr. does, and that could be a problem for him. Yes, Jacobs fought Canelo Alvarez last May – and lost – but he’s not the body puncher that Chavez Jr. Canelo is a great fighter, but he hasn’t had the training that Chavez Jr. got from his famous father Julio Cesar Chavez.

Nothing will change at 168, aside from Jacobs facing guys with more power that can hurt him. He should have stayed at 160, since there are more opportunities for big fights for him in that weight class.