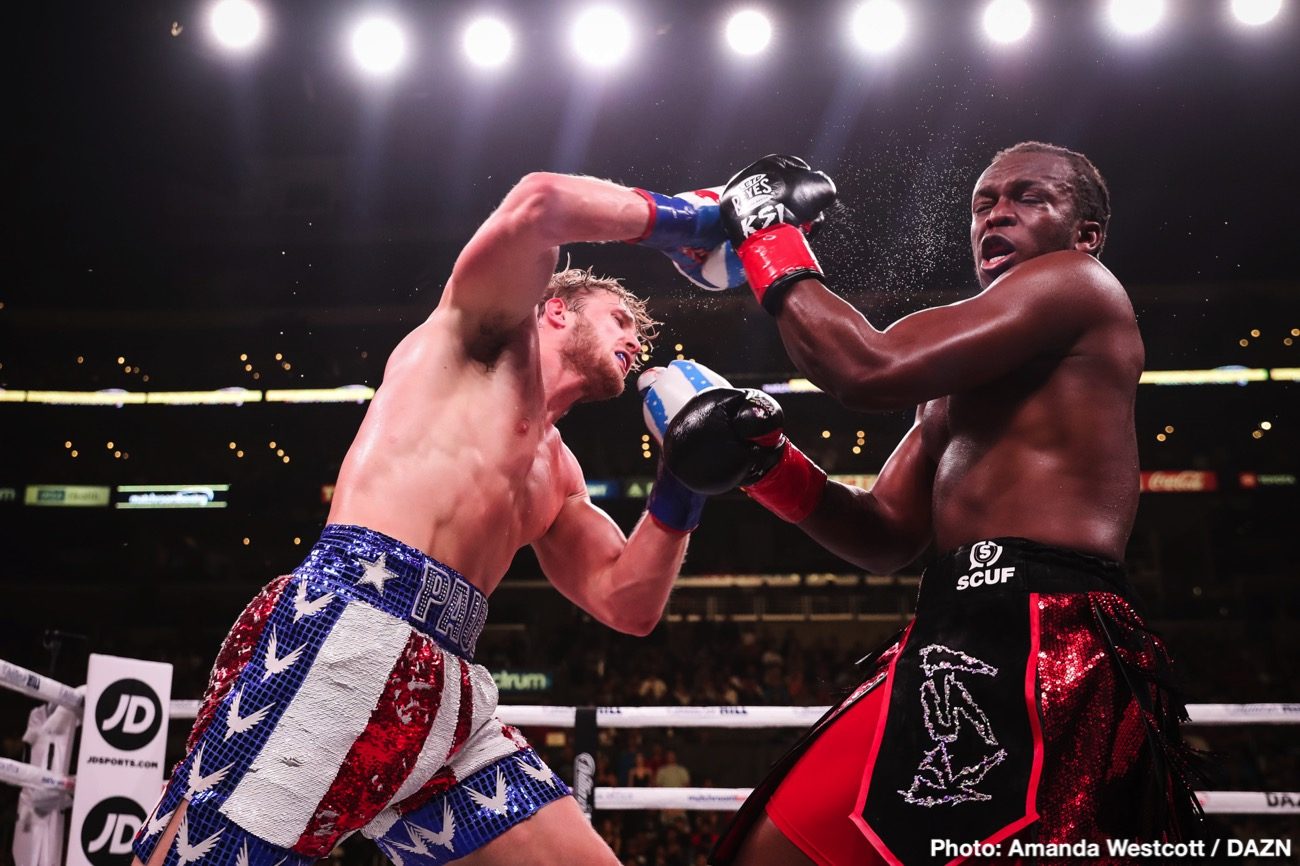 By Charles Brun: Matchroom promoter Eddie Hearn was over the moon with happiness about the success of the KSI vs. Logan Paul YouTube celebrity fight last Saturday night in Los Angeles, Nevada. He was pleased with the outcome of Britain’s KSI defeating American Paul by a six round split decision at the Staples Center in Los Angeles, California.

Hearn saw the KSI vs. Paul fight as a highly exciting one from start to finish. It’s unclear if Hearn was really impressed with the match or if he’s just saying that in order not to anger the average boxing fan, who didn’t see anything special from either YouTube guy. KSI looked wild,  unskilled and fragile-chinned. Logan Paul fought like a non-athlete.

Many fans weren’t happy with KSI vs. Logan Paul fight

A lot of hardcore boxing fans weren’t happy because they pay for DAZN to see quality boxing. Instead, they got a Youtube celebrity match that was thrust upon them last Saturday. The average American boxing isn’t familiar with KSI or Logan Paul, so they weren’t invested in wanting to see these two novices.

If you’re paying $20 per month for DAZN, you don’t see random Youtube celebrities fight it out. KSI vs. Logan Paul would have been a good fight for free television, but not on DAZN where people pay to see high level fighters.

Hearn says DAZN did really well in getting subscribers for this fight. But if this is going to be continual thing, they may start losing subscribers, because hardcore boxing fans don’t want to see celebrity matches.

Logan had KSI hurt every time he hit him with a right hand, and he should have been able to knock him out. For some reason, Logan wouldn’t throw right hands, even though his trainer Shannon Briggs was pleading him to use that hand.  Paul was only capable of jabbing most of the fight due to his stamina. Although Paul is a young guy, stamina-wise, he was like a 60-year-old.

“I really enjoyed it to be serious with you,” said Hearn to Boxing Social about the KSI vs. Logan Paul fight. “I found myself up, down, screaming and shouting. And I had Justin Bieber next to me, screaming and shouting and going mad. I don’t see how you couldn’t have enjoyed it. The fight was never going to be Hagler-Hearns, but they both showed plenty of bottle, and plenty of toughness. Give them a little bit of respect and credit.

“The turning point in the fight was he got hit with a huge shot that wobbled him to his boots, and it was only because Logan hit him on the back of his head. I think if he [Logan] hadn’t done that, the fight was over, because he was gone,” said Hearn in explaining how Logan had KSI hurt after dropping him in the 4th.

Logan got carried away after knocking KSI down in round 4. At that point, it looked like Logan was treating the match like a street fight in hitting KSI repeatedly to the head after he hit the deck.

“He lost his rag and I thought two points was a little harsh,” said Hearn. “But I’m glad it was two points, otherwise we would have had a draw. Then everyone would have thought it was me up to no good again. After that, I was convinced Logan was going to win the fight. KSI showed plenty of heart, and plenty of bottle,” said Hearn.

Logan looked like he needed oxygen each time he threw a handful of power shots. He didn’t even try to use his right hand other than in the 4th, when he suddenly dropped KSI after nailing him with some right hands. But then he blew it by hitting him with a shot while he was down.

The referee Jack Reiss stepped in and took two points from Logan for the foul. This is the same referee that worked last December’s Deontay Wilder vs. Tyson fight. he was criticized in that match by not halting the match after Wilder knocked Fury clean out in the 12th.

This wasn’t high level entertainment for true boxing fans. That’s difficult for many fans to get excited like Hearn was, but he had to reason to be happy.

“I knew he really wanted to win this fight,” said Hearn. “At the end of the day, they do the same thing for a living, and they compete against each other every day to be the biggest, to produce the greatest content, and to produce the most views. I don’t think they like each other, but if you can’t respect each other after sharing that experience then somethings wrong. I went up to KSI after the fight, and said, ‘Are you going to show respect?’ and he went, ‘No.’ I went, ‘Okay,’ and eventually he did.

That’s the right thing to do, because you’ve got to show the young people that watch the sport that this is the thing to do. When you box, you fight, and afterwards you shake hands and you show respect. That’s what sports are about, and I’m glad they did that. I’m not saying I’m done with that, but it was an experience and experiment,” said Hearn.

They both wanted to win. The difference was KSI was capable of throwing right hands without gassing. Logan couldn’t do that, because didn’t have the gas tank.

We’ve seen the numbers, and they were absolutely frighteningly huge everywhere, and you never say never,” said Hearn. “But roll on, Liverpool, Callum Smith vs. John Ryder, a domestic world title fight, We’ll see what happens. Massively, because you learn about a new world. I’m supposed to be digitally savvy, and these guys taught me about you’ve seen our views. We’re talking about our Matchroom Boxing YouTube channel.

“The numbers of the Sky streaming of the weigh-in is the most watched stream ever on Sky Sports across any sport. It was like another world. What was pleasing was to see the crowd tonight. It was different. You don’t see people like that in America at live boxing events. Young, vibrant, energetic,” said Hearn.

Matchroom Boxing must have made a killing for the KSI vs. Logan Paul fight for Hearn to be so happy about it.

« Ohara Davies calm ahead of the huge #GoldenContract campaign