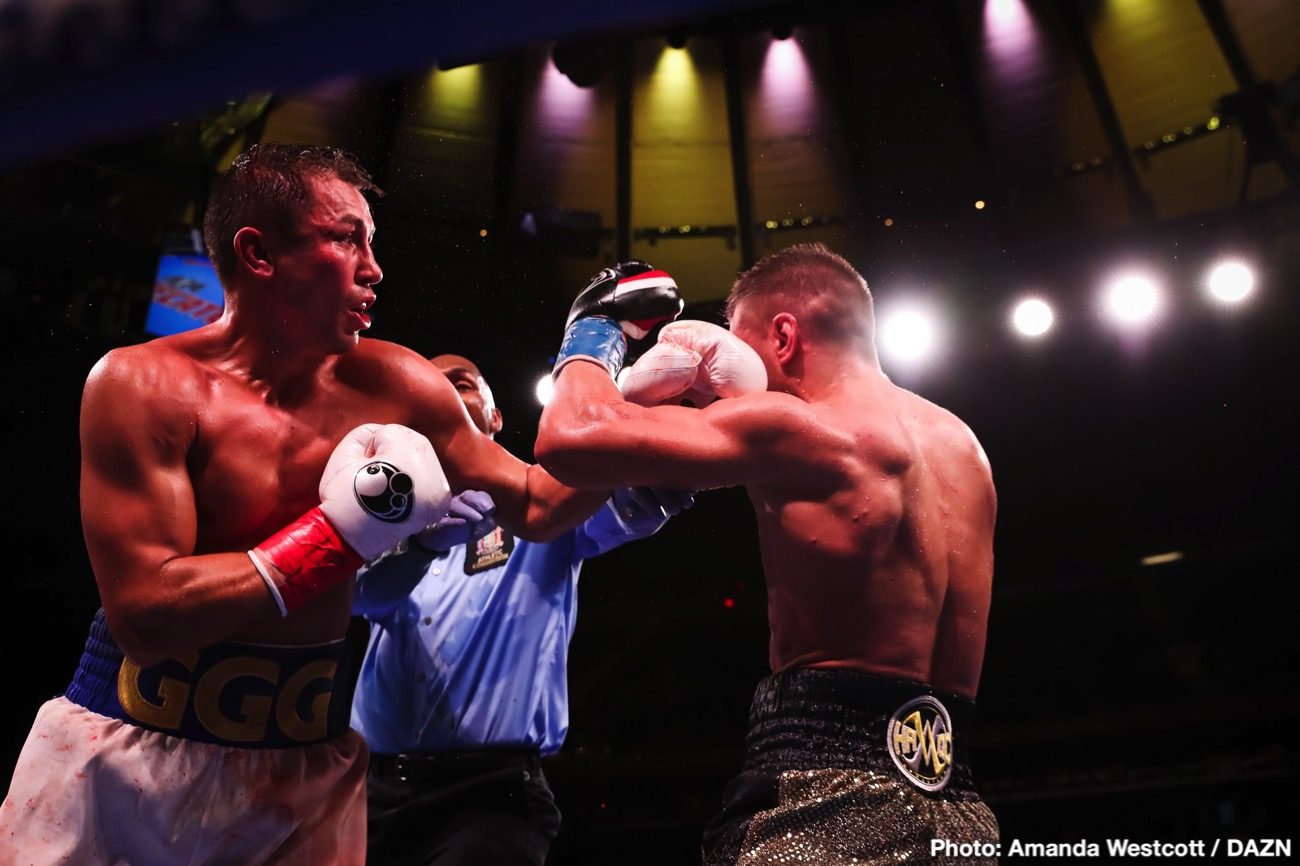 By Matt Lieberman: Trainer Johnathon Banks affirms what promoter Eddie Hearn is saying about Gennady Golovkin being ill all week long leading up to his fight last Saturday against Sergiy Derevyanchenko at Madison Square Garden in New York. Banks goes even further than Hearn by saying that Golovkin’s illness was “Horribly bad.”

“I don’t know,” said Banks said to IFL TV when asked if Golovkin’s illness played a factor in his performance against Derevyanchenko. “Getting sick effects anybody. I thought it was horribly bad, but it’s not something to talk about now because he chose to fight. With him choosing to continue to fight, it doesn’t matter how you feel. It only matters what you do in the ring.

“I told GGG that if he wins the last round, he’ll win the fight. I thought he won the last round. That’s just my opinion,” said Banks.

Since it’s only Golovkin’s team that are talking about his illness, it’s something you have to take with a grain of salt. Unless there’s someone that has has nothing to gain from making an excuse for Golovkin, it doesn’t matter what is being said about him being sick. What we do know is Golovkin looked poor, and that he got outworked by the younger 33-year-old Derevyanchenko (13-2, 10 KOs).

It looks bad that we’re only now hearing about Golovkin being sick. The time for him to reveal his illness should have been BEFORE the fight with Derevyanchenko, not after. When a fighter’s team starts talking about illnesses and such after the fight, it comes across like they’re just trying to cover up for their guy’s poor performance.

If Golovkin wants to prove that he was affected by illness, then the thing to do would be to give Derevyanchenko a rematch. Other than that, it’s pointless for Golovkin’s team to bring up him being sick. Ideally, it’s better if there isn’t any weak excuses about illnesses and injuries after fights because the fans are too accustomed to hearing these type of things. Golovkin’s team should be giving Derevyanchenko credit instead of discrediting him by saying that GGG was sick.

Banks rates GGG’s performance a 7 out of 10

“Out of a 10, I’ll give him a 7, because I think he could have done more. He’s better than he showed to me,” said Banks in rating his performance against Derevyanchenko. “I’ve seen better performances from him in the gym. I think he’s better than what he’s shown. I thought it was just a knockdown. The kid wasn’t hurt, and his legs weren’t shaken,” said Banks about Derevyanchenko in talking about the thoughts that went through his head when he saw Golovkin drop him in round one.

“I knew they weren’t going to stop it. His [Derevyanchenko] cut-man did a heck of a job. They say it was from a head-butt, but I didn’t see a head-butt. I seen the jab landing over and over again, but I seen the head-butt.

Golovkin’s performance looked more like a 5, and not a 7 against Derevyanchenko. It depends on what version of Golovkin that Banks is comparing his performance to. If he’s comparing Golovkin to what fans sw in his rematch with Canelo last September, then it makes sense to give him a 7. But if this if he’s being compared to the GGG that destroyed Matthew Macklin in 2013, then rating him as a 7 is way too high.

“You see all the middleweights coming around to fight GGG, said Banks. “They’re not coming around to fight Derevyanchenko. The reason for that is Derevyanchenko is a pain in the a– for anybody. I don’t care who you are. He’s the type of guy that is going to be there. And he’s not coming to visit. He’s the type of guy that moves in, and he’ll be in your face all night long. I hate decisions. I’ve always hated decisions in boxing.

“You can win every round, and knock a fighter down in every round, and if it goes to decision, you’re crossing your fingers and hoping. That’s really how boxing is. You have no idea how three people’s opinions are. You’ve got three people to make one decision. They don’t coordinate with each other. So they all have their own opinion. You just don’t know what’s going to happen,” said Banks.

Banks is correct about fighters not wanting to face Derevyanchenko. He’s not someone that is in high demand, because there’s not much reward in fighting him. A lot of risk without the same kind of monetary rewards that fighters get when they take on the likes of Saul Canelo Alvarez and Golovkin.

Derevyanchenko waiting to see if he gets Golovkin rematch

“I don’t know. He wants this fight with [Saul Canelo] Alvarez,” said Derevyanchenko when asked if he thinks Golovkin will give him a rematch. “He wants this fight for belt. Maybe if his fans want, he’ll fight the rematch. I was putting the strong punches on him and the strong movements on him, but he was taking it. He was taking the punishment. He has experience, and he’s a champion,” said Derevyanchenko about Golovkin.

The good news for Derevyanchenko is he’ll likely hear in the next two months whether he’ll get the immediate rematch with Golovkin. Unfortunately, Derevyanchenko probably won’t get the second fight. Golovkin’s promoters Eddie Hearn and Tom Loeffler are talking about GGG possibly having a mandatory due for his new IBF belt, and they also are saying that he wants career defining fights. Derevyanchenko isn’t a world champion now, and he’s got 2 losses on his record in controversial defeats against GGG and Daniel Jacobs.