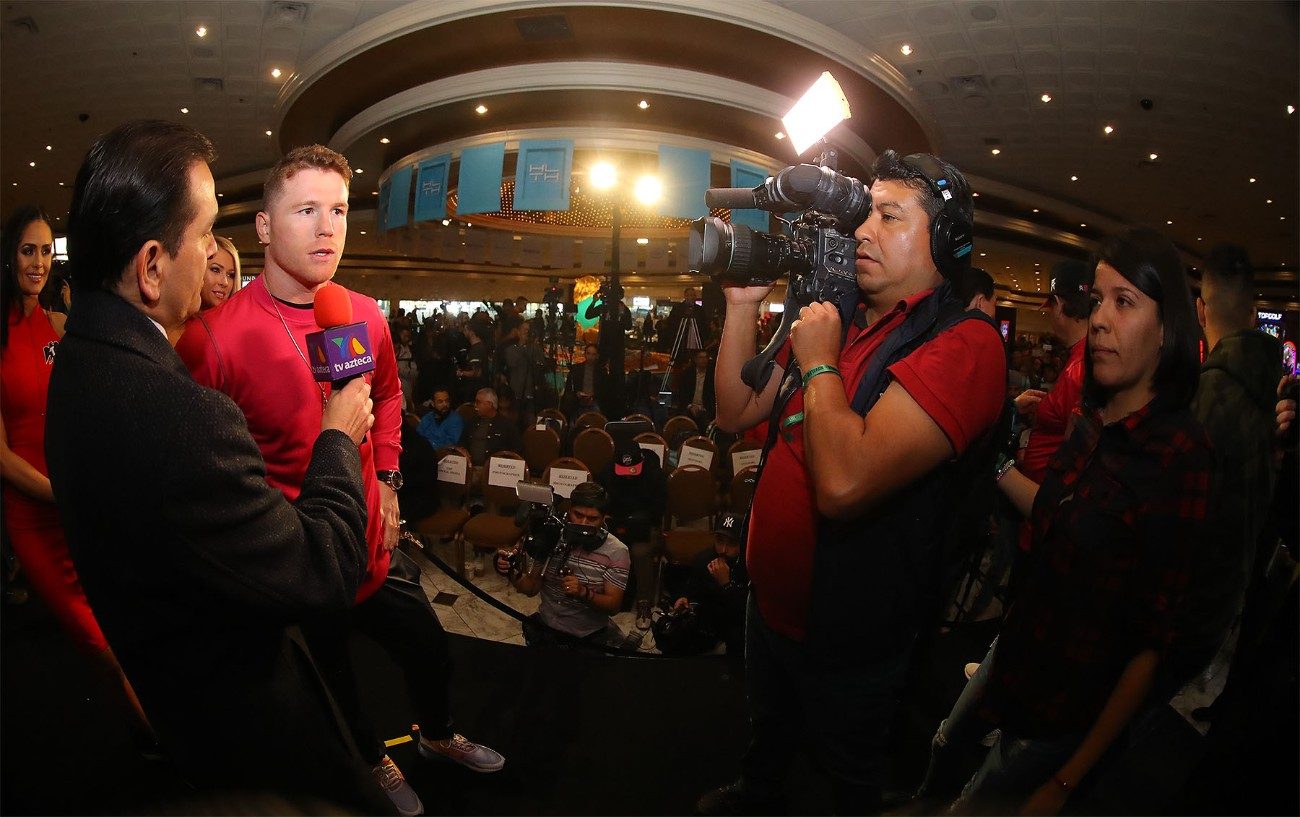 By Dean Berman:  Golden Boy star Saul Canelo Alvarez revealed that his weight for his fight this Saturday against Sergey Kovalev will be no greater than 180 pounds. Canelo (52-1-2, 35 KOs) says he didn’t want to add a lot of weight in order to retain his speed, quickness and power for this important fight.

A lot of fans expected Canelo to weigh in the 190s for the fight, but that’s not going to be the case.

What’s interesting is Canelo’s face looks leaner, and more boyish for the Kovalev fight compared to his two fights with former middleweight champion Gennadiy Kovalev. Moreover, Canelo’s physique doesn’t look as ripped as it did for his 2 fights against GGG. The likely explanation for that is Canelo hasn’t needed to diet to keep his weight down in order to make the 160-pound limit. He’s been able to eat, and not worry about limiting calories and dehydrating.

Canelo says he’ll weigh 180 at the most

“I don’t plan on going up a lot,” said Canelo. “I want to go in the ring, and be really strong and fast. Weight isn’t going to give me my strength. 180 at the most,” said Canelo when asked how much he’ll weight on Saturday. “195, 190, I don’t know,” said Canelo in estimating how much Kovalev will weigh.

At Tuesday’s Grand Arrival at the MGM Grand in Las Vegas, Kovalev looked like he’s around 180 lbs. In his last fight against Anthony Yarde, Kovalev looked no bigger than 190 lbs at the most. He was lean, and agile at the weight. He might not even be as high as 190, because that would slow him down.

Kovalev is roughly the same size as Canelo’s last opponent Daniel Jacobs. Canelo handled Jacobs’s size well in their fight last May. He didn’t have problems with Jacobs until the second half of the fight when he gassed out. It’s important that Canelo pace himself against Kovalev, because he cannot afford to tire out in the last six rounds.

It’s good that Canelo moves his head a lot, but he’s not going to be able to get out of the way of Kovalev’s jabs the way he did against Golovkin. So if Canelo fades in the championship rounds against Kovalev, he could be in trouble. Kovalev’s jab is like a power punch, and he likes to throw combinations in bunches. These are all things that Canelo has problems with. He doesn’t do well against fighters jab, and he tires fast against opponents that throw combinations.

“In boxing, nothing is calculated,” said Canelo when asked if the decision to face Kovalev is a ‘calculated risk.’ “I don’t know where you got that question from. Boxing is a contact sport, and you risk your life. When you go up there, it’s a challenge. Of course, that’s what we do. I believe in my capacity, and I believe I can win this fight. And that’s why we took this fight,” Canelo said.

It sounds like Canelo read the comments that Andre ‘SOG’ Ward made about him recently when he stated that he’s taking a “calculated risk” in facing the 36-year-old Kovalev. Ward thinks that Kovalev isn’t the same fighter he once was, and is close to being shot.

Ward says that Canelo choosing to fight Kovalev was a move done because he saw weakness in him due to his deteriorating boxing skills.  Andre notes that Canelo didn’t choose to fight Kovalev four years ago when he was still “The Krusher”, and knocking everyone out. It’s only now that Canelo has picked Kovalev out after he lost twice to him, and was stopped by Eleider Alvarez. Ward thinks that if Canelo had picked the arguably more dangerous IBF/WBC light heavyweight champion Artur Beterbiev (15-0, 15 KOs), then would represent a “stupid” risk rather than a “calculated risk.” In other words, Ward thinks Canelo would lose to the two-time Russian Olympian Beterbiev.

“Yes, of course it does. That’s why we train especially for all these things,” said Canelo when asked about whether he’s worried about Kovalev’s jab. “Kovalev has a really good left, and we train for that. Of course, it worries us. I feel better, stronger. I’m happier, because I’m eating comfortably,” said Canelo.

It doesn’t matter who Canelo has trained with in preparation for this fight, he’s not going to be ready for Kovalev’s jabs. If there was a fighter that could jab like Kovalev, they wouldn’t be a sparring partner for Canelo, would they? That’s why it’s pointless for Canelo to say that he’s going to be ready for Kovalev’s jab when he’s not trained with anyone that kind of a jab. There is nobody at 168 or 175 that can jab like Kovalev. Gennadiy Golovkin has an excellent jab, but he doesn’t throw it as hard as Kovalev. He’s also not able to jab repeated in a piston-like way that Kovalev does with his jab. Canelo has never fought anyone with a jab as good as Kovalev’s, and he would be disingenuous if he said he has.

Canelo not sure if he’ll continue fighting at 175 yet

“We’ll have to see how we feel at 175, and why not have another fight at 175?” said Canelo. “It’s going to be a complicated fight, especially the first assault. His arms are long, and he knows the distance well. He moves well, so it’s going to be a bit complicated.

“Regarding Kovalev’s punching, obviously I have to be careful, because it’s a new weight for me. The punch is going to be felt more. But as I’ve said, I believe in my physical strength, my capacity as a fighter, and we have to pull everything out on Saturday.  To make history is the only thing we’re seeking,” said Canelo.

The chances of Canelo staying at 175 for his next fight after Kovalev are low, and that’s because he would be expected to face Beterbiev. If Canelo fought anyone else besides Beterbiev, he would be viewed ducking him. The reality is, Canelo is already seen as ducking Beterbiev simply by facing Kovalev. Beterbiev is undefeated, and a unified champion holding the IBF and WBC 175-lb titles. In contrast, Kovalev holds ONE title, and has lost 3 out of his last 7 fights. It’s obvious that Canelo picked Kovalev for a reason. He thinks he can beat him, but he clearly doesn’t feel that way about Beterbiev.