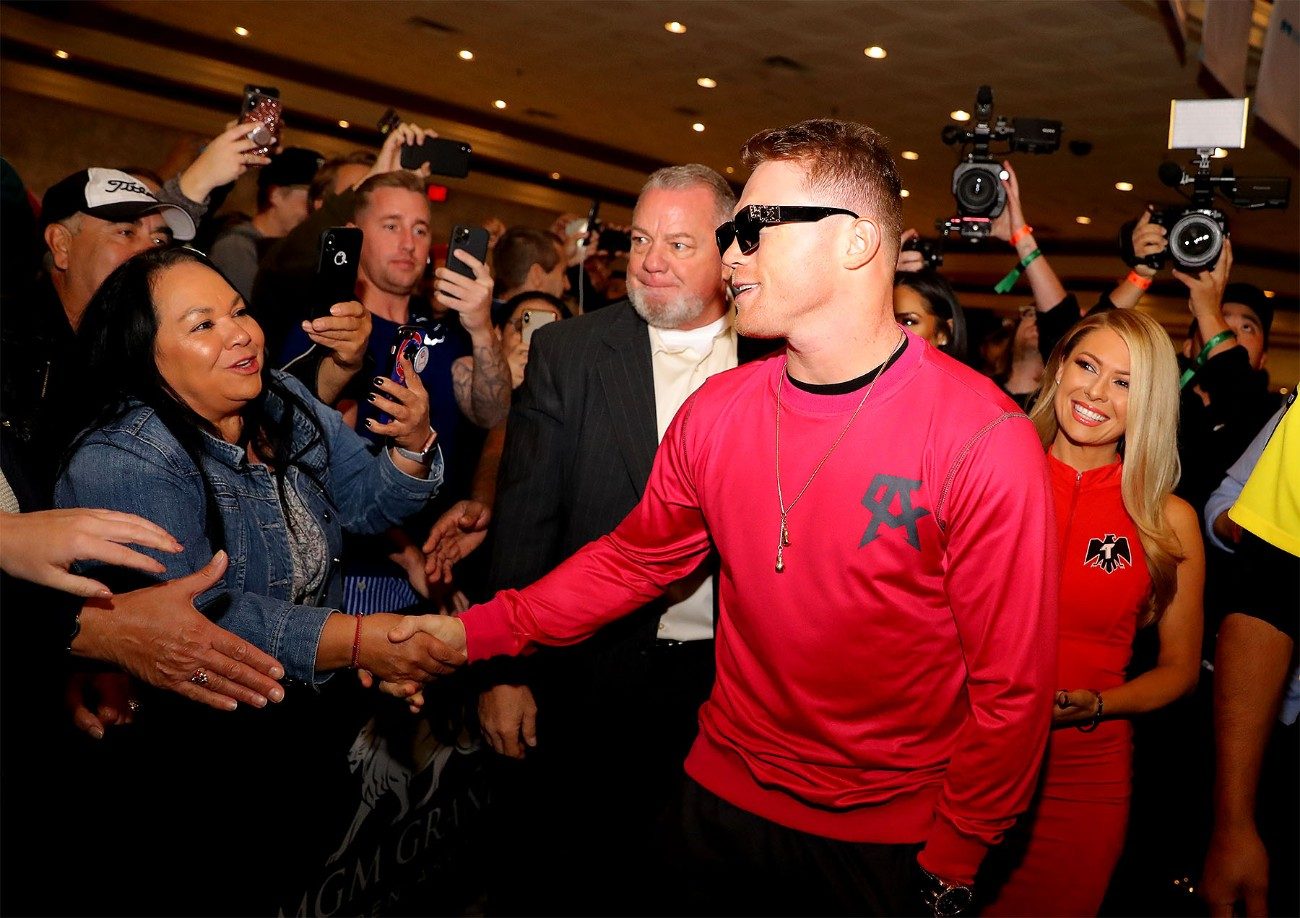 It would be a BIG surprise to boxing fans if Canelo were to face Beterbiev, because most fans think he won’t fight him. It’s one thing for Reynoso to say Canelo is ready to fight Beterbiev, but it’s another thing for him to actually do it.

Kovalev lost twice to Beterbiev when the two were in the amateur ranks. It’s unclear where Reynoso got the idea that Kovalev is better than Beterbiev. Most boxing fans would strongly disagree with Reynoso.

Just the fact that Kovalev hast lost almost half of his last seven fights suggests that he’s NOT as good as Beterbiev. Kovalev was almost knocked out in his last fight by Anthony Yarde as well. The 36-year-old Kovalev (34-3-1, 29 KOs) is looking really shaky right now, and he might not even be the fourth best fighter at 175. If Kovalev is better than Beterbiev, then why is almost getting knocked out by a limited fighter like Yarde?

“We’re going to win this championship on Saturday, and then go to 160 or 168, and also if there’s another 175, we’ll win it as well,” said Canelo’s trainer Eddy Reynoso when asked whether Canelo will stay at 175 after Saturday’s fight with Kovalev. “We’ll look for the best fight, and the best opponent that offers the best fight, and continue breaking records and continue growing.

“Whomever as well. We’re ready,” said Reynoso when asked if Canelo would be interested in fighting Beterbiev. “Kovalev is better than Beterbiev. That’s the reason why we’re fighting him on Saturday. So why wouldn’t we fight him [Beterbiev],” said Reynoso. “He’s [Canelo] a fighter that has had almost 60 fights, and he hasn’t even been hit. And he’s fought the best in all the divisions, and he hasn’t been hit because of his defense. That’s based on hard work and learning every day,” said Reynoso.

It’s obvious that Reynoso has to say something on Kovalev’s behalf to validate him as Canelo’s opponent for Saturday. If Reynoso brought up the undeniable fact that Kovalev isn’t as good as Beterbiev, he would be discrediting Canelo in doing so. Reynoso kind of has to build Kovalev up in the eyes of the boxing public.

If he told the fans that Beterbiev is the far superior fighter than Kovalev, then people would see Canelo as a cherry picker. Unfortunately for Canelo, that’s how a lot of boxing fans see him. He did well in choosing to fight Gennadiy Golovkin, but he also didn’t face him until he was 35-years-old. It took Canelo three years to finally face GGG. He didn’t fight him when he was at his best at 32 and younger.

“No,” said Canelo when asked if he saw Beterbiev’s last fight.

It’s kind of surprising that Canelo didn’t watch Beterbiev’s last fight against WBC light heavyweight champion Oleksandr Gvozdyk because the match received so much attention. Boxing fans have been talking about Canelo and Beterbiev in the same breath ever since the two-time Russian Olympian defeated Gvozdyk this month on October 18. It’s interesting that Canelo didn’t watch the Beterbiev-Gvozdyk fight afterwards when boxing fans started questioning why he’s not facing Beterbeiv instead of Kovalev.

Canelo says he must return to 160 again

“I have to go back to my weight again,” said Canelo in talking about him needing to go back to middleweight. “I simply didn’t dehydrate. Yes, that is right,” said Canelo when asked if he’ll have problems going back down to 160. Canelo said that he didn’t add muscle for this fight. “Currently, my only motivation is November 2nd, Kovalev.

There’s really no one for Canelo to fight at 160 that will attract a lot of attention from the boxing public. Golovkin (40-1-1, 35 KO) is coming off of a questionable 12 round decision against Sergiy Derevyanchenko on October 5. A lot of boxing fans thought GGG was given a highly controversial decision.

Canelo says he also thought Golovkin lost that fight to Derevyanchenko. So if Canelo moves back down to 160 and faces Golovkin, he’s going to look bad. Who else is there for Canelo to fight at 160? These are the only fighters that the fans would be interested in seeing Canelo fight at 160:

At 168, Canelo has a number of decent but not great fights against these fighters:

Canelo says cruiserweight is possibility for him

Considering how many weak champions there are at cruiserweight, it’s very possible Canelo could win a title in that division. If Canelo picks the right vulnerable champion, he’ll likely win a belt at cruiserweight.

The reality is Canelo has NEVER beaten the best fighters in any of the weight classes he’s won titles at initially. Yeah, Canelo beat Golovkin to win a title at middleweight, but that was AFTER he defeated Miguel Cotto at a catch-weight to win the 160-lb WBC belt.

“I’ll be one of the best in Mexico, and that motivates me a lot,” said Canelo when asked about his thoughts about him being close to winning his 4th division world title. “Saturday, November 2nd, this is what I’m seeking,” said Canelo.

When a fighter’s focus is just winning world titles for the sake of it, then the tendency is for them to cherry pick champions. It would be a lot more important for Canelo’s legacy if he fought the best champions in weight class instead of just winning belts for the sake of it. Erik Morales won titles in four weight classes, but he did it against good champions. He didn’t pick out old guys in their mid-30s, and no longer at their best.

Naoya Inoue Q&A: “I will show the best performance of my career to win Ali Trophy” »