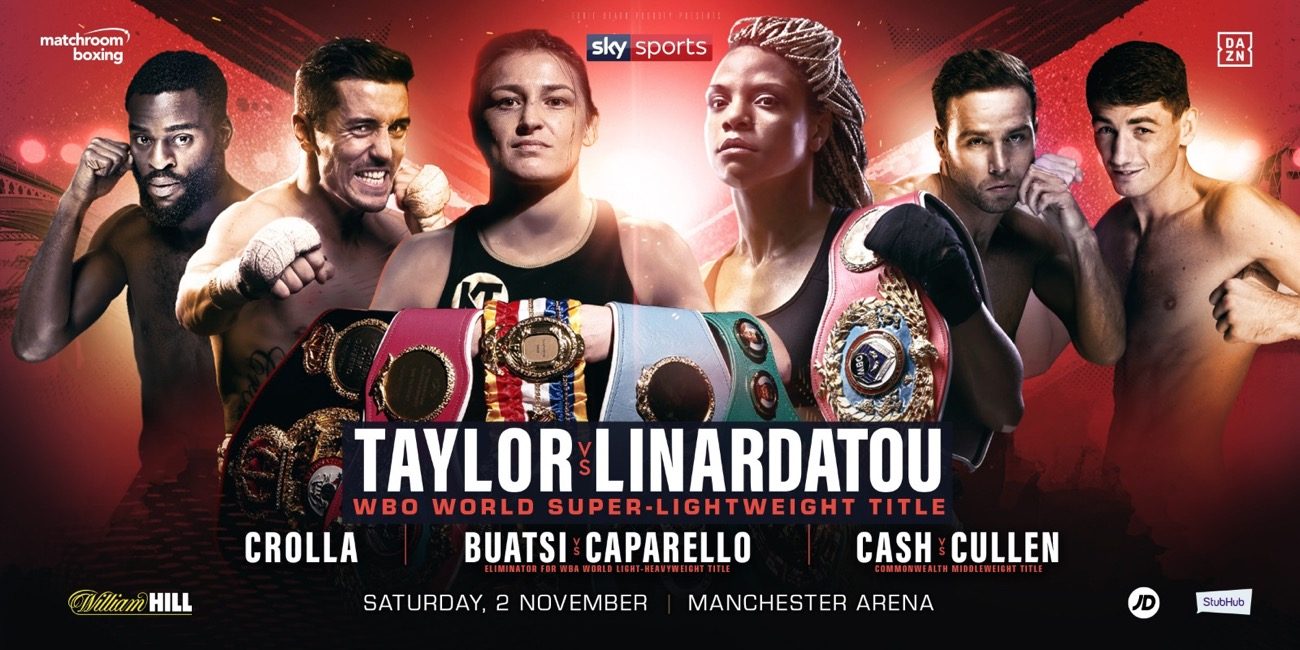 Katie Taylor will bid to become a two-weight World Champion when she meets Christina Linardatou for the WBO Super-Lightweight World title at Manchester Arena on Saturday November 2, shown live on Sky Sports in the UK and DAZN in the US.

Taylor (14-0, 6 KOs) completed her journey for Olympic gold to undisputed Lightweight World Champion with a thrilling points win over Belgium’s Delfine Persoon on the blockbuster Joshua vs. Ruiz card at Madison Square Garden on June 1.

After a bloody and brutal battle that captivated the New York crowd, the Irish star added Persoon’s WBC belt to her IBF, WBO and WBA titles to hold all four at 135lbs and cement her place as the number one Lightweight on the planet.

Linardatou (12-1, 6 KOs) landed the WBO crown with a sixth round TKO win over Kandi Wyatt in her home city of Athens in March. The 31-year-old made the first defence of her title against Deanha Hobbs three months later in Greece, dominating the Australian over ten rounds.

Her sole career loss came against Delfine Persoon in June 2016 when she was outpointed in a challenge for the former champion’s WBC title in Belgium – her first World title attempt before moving up in weight to Super-Lightweight.

“I had some of my early pro fights at Manchester Arena and to come back in November and headline a card there a couple of years on is amazing,” said Taylor. “It’s played host to some huge nights in boxing history so I’m honoured to be part of that tradition.

“It’s a new challenge at a new weight and something I’m really excited about. I still feel like I have so much left to achieve in the sport and becoming a two-weight World Champion is one of those goals.

“There are still so many huge fights out there for me like the Amanda Serrano fight, a rematch with Delfine Persoon and a fight with Cecilia Brækhus but the first goal is November 2nd and winning another World title.

“I don’t have any issues making Lightweight so I think I can move comfortably between the two weights. I always want to push myself and Christina’s an excellent World Champion so it will be a big test for me.”

Linardatou said: “I plan on leaving England with my title. If I need to knock Katie Taylor out in order to retain the title, that’s what I’ll do.”

Former Lightweight World Champion Crolla (34-7-3, 13 KOs) fittingly returns to the scene of his greatest triumph to call the curtains on a memorable career after challenging pound-for-pound star Vasiliy Lomachenko for the WBA and WBO Lightweight titles in Los Angeles earlier this year.

The Mancunian hero won the WBA Lightweight crown against Darleys Perez on a hugely emotional evening at Manchester Arena in November 2015 and successfully defended his title against Ismael Barroso at the same venue the following year.

Croydon’s Buatsi (12-0, 10 KOs) fights in Manchester for the first time as a professional after extending his explosive KO streak to seven fights as he stopped Canada’s Ford in seven rounds at The O2 in London on the Lomachenko vs. Campbell card.

Next up on his World title quest is Australia’s Caparello (30-3-1, 13 KOs), a former opponent of WBO Light-Heavyweight World Champion Sergey Kovalev and former IBF Super-Middleweight ruler Andre Dirrell, who arrives on these shores coming off four wins.

Cash (11-0, 7 KOs) was due to defend his Commonwealth title against Little Lever’s Cullen (17-1, 8 KOs) in July before an injury ruled him out but the pair will now clash in November after Cullen stopped John Harding Jr in eight rounds in Liverpool, while Yafai (16-1, 9 KOs) was last seen stopping Brayan Mairena in Birmingham last September.

“I’m so happy to be back in Manchester for this huge show,” said Eddie Hearn. “Katie Taylor is now established as one of the biggest stars in world boxing and she bids to make more history by becoming a multi-weight World Champion by challenging WBO Super-Lightweight champ Christina Linardatou.

“Hometown hero Anthony Crolla rolls the dice one more time as he takes part in his final fight in the sport in the arena that has hosted so many epic Anthony Crolla nights. The stabilisers are off for Joshua Buatsi as he takes a huge step up against tough Australian Blake Caparello in a WBA World title eliminator and there is a brilliant domestic Middleweight clash between Commonwealth champ Felix Cash and English champ Jack Cullen – there’s plenty more beneath these four fights on what will be a huge night of boxing.”

Adam Smith, Head of Sky Sports Boxing, said: “We are absolutely thrilled to be showing the best female boxer in the world back on Sky Sports on this huge show. This is another major test for Katie Taylor as the undisputed Lightweight champion takes on all comers and continues to cement her extraordinary legacy in the sport.

“Katie is a marvellous ambassador and inspiration to so many and we are delighted to be working so closely with her as we look to feature both the very best in boxing and also in women’s sport on Sky.”

Undefeated Denaby Super-Featherweight talent Terri Harper has signed a promotional deal with Eddie Hearn’s Matchroom Boxing and will make the first defence of her IBO World title against Vivian Obenauf on the Taylor vs. Linardatou undercard at Manchester Arena on November 2, live on Sky Sports in the UK and DAZN in the US.

Harper, South Yorkshire’s first female professional boxer, joined the paid code in November 2017 after a successful stint in the amateurs that saw her win three national titles and take home a silver medal for England from the European youth championships in Poland in 2012.

The 22-year-old has won all eight of her pro contests to date and picked up the WBC International Lightweight title with a sensational stoppage of Nina Bradley in March earlier this year before taking out Nozipho Bell in eight rounds to earn the IBO Super-Feather World title in July.

Obenauf (14-5, 7 KOs), a two-time World title challenger from Brazil, is no stranger to fighting on these shores. She took Irish star Taylor the distance in Manchester back in 2016 and returned to the UK a year later to challenge Chantelle Cameron for the IBO Lightweight World title in Leicester.

“I was in disbelief when I found out that I’d be signing a promotional deal with Eddie Hearn and Matchroom Boxing,” said Harper. “I got the news shortly after I won my IBO World title in July and I was delighted. It’s crazy how much has happened in the short space of two years.

“I always expected to go quite far with my boxing but not as quickly as I have done. Everyone dreams of signing with Matchroom and I believe I’m in the perfect place to fulfil my potential. We originally planned on having around ten fights before pushing on towards titles but opportunities came up and we knew we were ready.

“Katie Taylor has paved the way for women’s boxing in recent years and to be defending my World title on her undercard on my Matchroom debut is absolutely massive and I can’t wait to get out there in front of the TV cameras again.

“I’ve been in the gym for a solid two months waiting for my fight date to be confirmed. They’re all going to be tough fights from now but that’s what I’m in this sport to do, prove myself against the best names out there.”

Stefy Bull, Manager of Terri Harper, said: “It’s a pleasure to be working with Matchroom Boxing again. I’ve had a long relationship with them through Gavin McDonnell and I believe they are the best promotional outfit out there. Terri is a special talent and I know that Eddie will deliver World title opportunities for her on the biggest stage. Terri will grab those opportunities with both hands.”

Harper vs. Obenauf is part of a huge night of action in Manchester.

Errol Spence on fighting Canelo Alvarez: He tires out »