Herring vs Roach Jr on Nov. 9 at Fresno’s Chukchansi Park 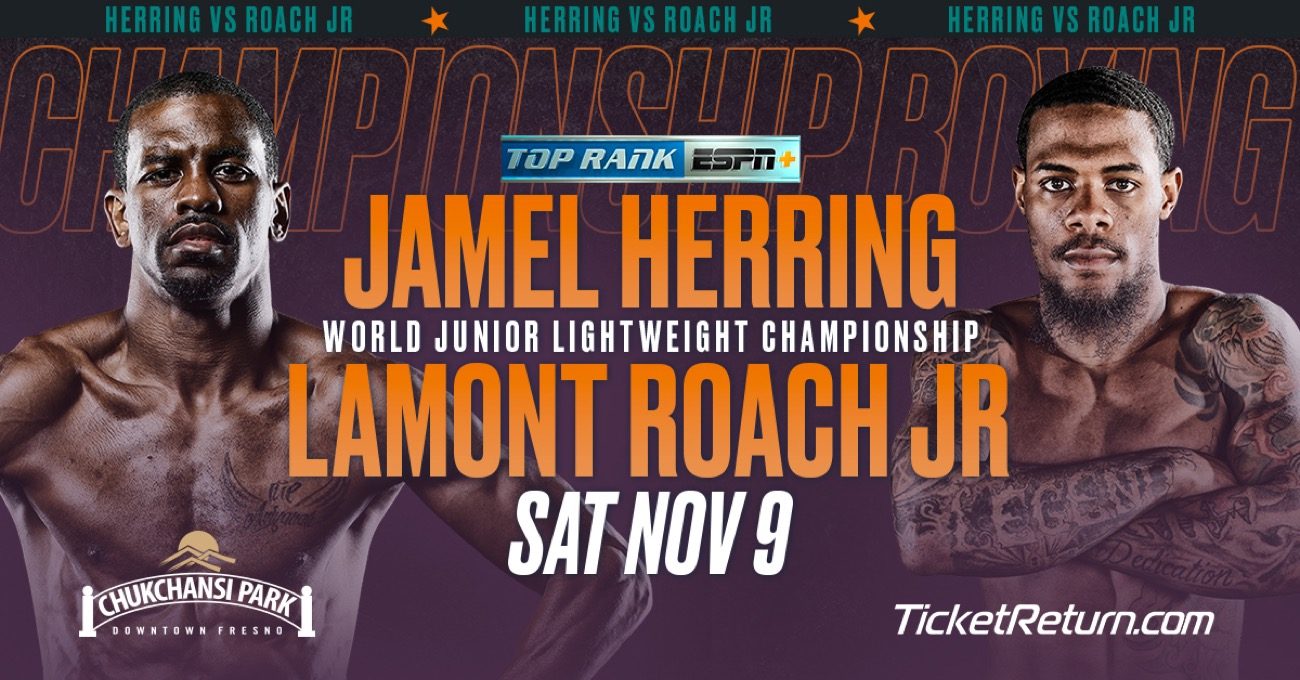 Herring is a U.S. Marine Corps veteran who served two tours of duty in Iraq, and this card is a celebration of both Veterans Day and the Marine Corps Birthday (Nov. 10).

Gabriel Flores Jr. (15-0, 6 KOs), the undefeated 19-year-old lightweight sensation from Stockton, California, is set to appear on the undercard.

Promoted by Top Rank, in association with Golden Boy, tickets are priced at $200, $96, $46 and $29 (not including applicable fees). Tickets can be purchased by visiting mpv.tickets.com, charge by phone at 559.320.TIXS (8497) or at the Chukchansi Park box office (open Monday-Friday from 9 a.m PT to 5 p.m. PT). In honor of Veterans Day and the Marine Corps Birthday, any active or retired service members will receive up to four free tickets to the event by presenting their military ID at the Chukchansi Park box office (while supplies last).

Herring (20-2, 10 KOs) won the title May 25 on Memorial Day Weekend with an upset decision victory over reigning champion Masayuki ito. A 2012 U.S. Olympian, Herring fought in Fresno last September, as a group of retired and active Marines lined the Save Mart Center walkway as he made his way to the ring. Roach (19-0-1, 7 KOs), the WBO No. 1 contender, has won three in a row since the only blemish on his record, an April 2018 draw against Orlando Cruz.

Herring-Roach and a co-feature will stream live beginning at 10 p.m. ET/7 p.m. PT on ESPN+, the leading multi-sport streaming service. The undercard will stream on ESPN+ starting at 6:30 p.m. ET/3:30 p.m. PT.

Undefeated light heavyweight, Chris Thomas will be featured in the co-main event on a Dee Lee Promotions card when he takes on Roy King from Johnson City, Tennessee this Saturday night at the Hockessin PAL in Hockessin, Delaware

The 21-year-old “Sandman” has upped his resume to 13-0-1 with eight knockouts when he scored wins over Dennis Knifechief (12-8) and Joe Hughes (6-1). In his last fight that took place on July 20th in Hampton, New Hampshire, Thomas stopped Francisco Neto in 2:10 of the first round.

He averages four fights a year since turning pro as an 18-year-old . He’s employed by Shore Point Dist and is a Teamster. He’s managed and trained by Shawn Darling at Lacey Township’s Gladiator Gym.

“He’s had a great camp sparring with world ranked southpaws, Fanlong Meng (15-0) and Derrick Webster (28-2) to prepare for the left-handed King,” said Darling.

Thomas won the New Jersey Middleweight belt that was once held by Bobby Czyz with a third round TKO over Darrell Bunting on June 1, 2018.

Thomas recently broke into the NABF rankings at number 20, and is challenging King for the vacant WBC USNBC silver 175-pound belt that reigning WBA champ, Dmitry Bivol recently held. Thomas is hoping that a victory would move him up the North American rankings

Thomas is a promotional free agent.

Callum Smith vs. David Benavidez interests Hearn for May 2020 »