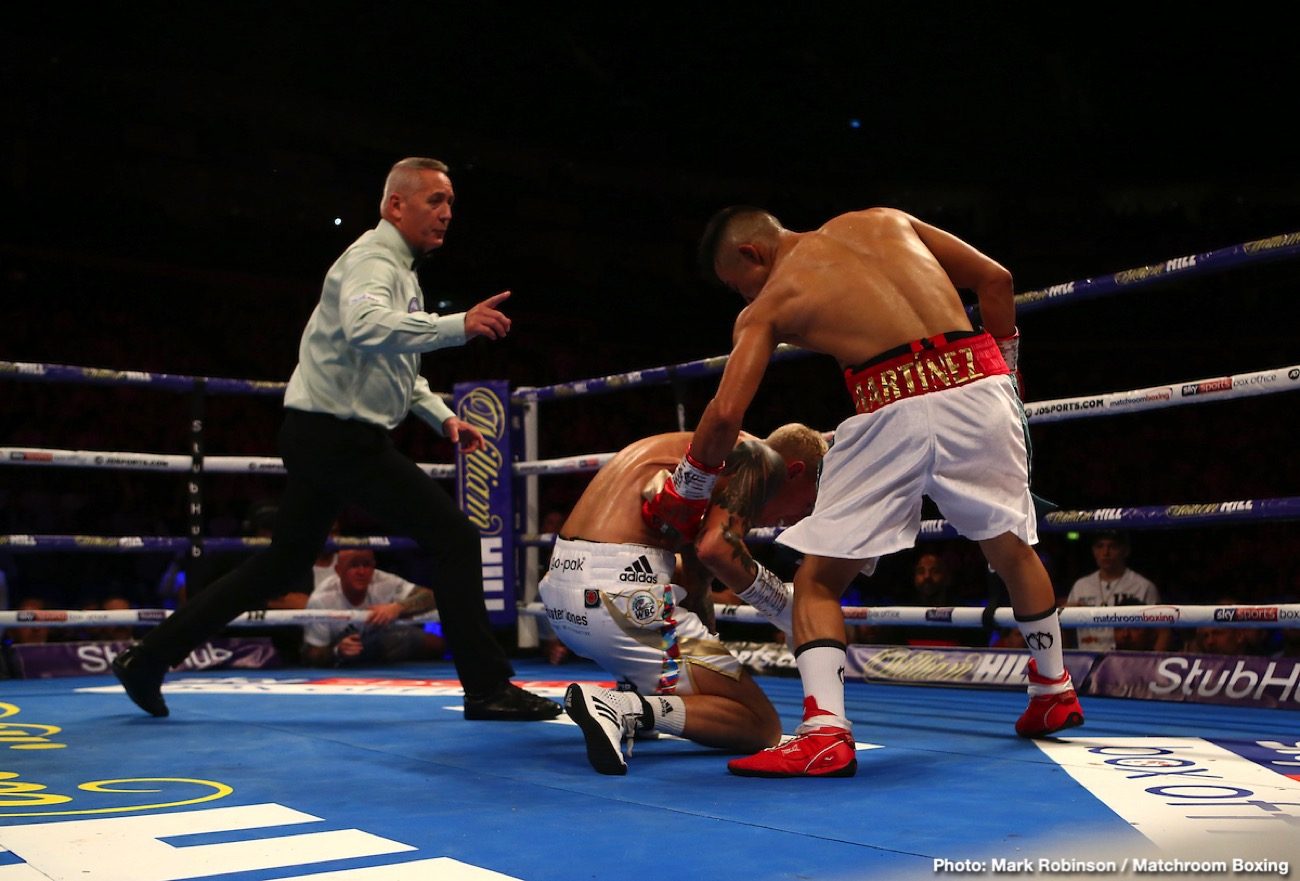 Referee Mark Lyon ruled it a knockout win for Martinez

The fight was initially ruled a 3rd round knockout win for the 24-year-old Martinez, but it was almost immediately overturned by WBC president Mauricio Sulaiman. He reviewed the fight on instant replay, and ruled that Martinez had hit Edwards with a body shot while he was down on one knee after being dropped. Mauricio then rued the fight a no contest, and ordered Edwards and Martinez to face each other in an immediate rematch.

Everyone should have been happy with that decision, right? Wrong. Edwards and Hearn aren’t sure whether they’ll take the rematch with Martinez. Instead, Edwards could vacate his World Boxing Council 112-lb title, and move up to 115. That would be a weak move on Edwards’ part, because he would be viewed as ducking Martinez, but he might not be confident that he can win.

Hearn: It’s not easy for Charlie Edwards to make weight

“He did what he felt was right, because it was a disgusting low blow,” said Hearn to secondsout about the Edwards vs. Martinez fight. “He should have been disqualified, but you can’t overturn a decision for a disqualification. I think Mauricio did the right thing. Charlie struggled to make the weight. He’s a consummate professional, but making eight stone is not easy.

And it’s a tough fight against a very good fighter in Martinez, and we’ve got to speak to Charlie to see what he wants to do. It’s a tough rematch, but he wants to defend his belt, you know? There will be a lot of controversy around that, and a lot of talking points. We’ll see where his minds at in the next couple of weeks,” said Hearn.

It sounds like Hearn is making excuses to get Edwards, 26, out of the rematch with Martinez by talking about his problems making weight. It’s obviously not easy for Edwards to make weight, but it’s not easy for Martinez either. It goes with the territory.

If Edwards moves up in weight to super flyweight, he’ll need to fight these guys to win a title:

Those are all guys that will likely beat Edwards with greater ease than Martinez did. If Edwards doesn’t fancy the job in facing Martinez again, then he can always vacate. He would then go after the other champions at 112: Moruti Mthalane, Artem Dalakian and Kosei Tanaka. Edwards’s chances of beating those guys are slim.

What can I say, I’m gutted the way the fight ended. Very hard night in the office and it’s the last way I would of wanted to keep my title. Martinez is a tough, strong world class opponent. Big thank you to everyone for the support it means the world ❤️

“It is what it is. The thing is I’m still champion,” said Charlie Edwards to IFL TV following his 3rd round no contest against Martinez. “I’ve got to give my props to him. He was a very tough man, and very game. The game plan was always to be to take him late. Yeah, he did hurt me, and that’s why I took a knee to get myself back together. And then that shot on the floor…I can’t really say much, and I need to watch it.

And, I believe I won the first round, and won the second round. I was getting into it, but he did hurt me, and I can’t deny that. I can’t sit here and say, ‘He didn’t.’ That’s why I took a knee. That shot did do me. It was definitely deliberate. He loaded up and swung massively. I was on the floor, and relaxed. The crowd showed it all with the booing. I’ve got to thank the WBC, Mauricio [Sulaiman] for abiding by the rules of boxing,” said Edwards.

Edwards is kidding himself saying he won the 1st round. Martinez every second of every round with powerful jab, and left hooks that he was clobbering Edwards with. The jabs from Martinez were like power shots. There’s nobody in the 112 or 115-lb divisions that throws a jab like Martinez. He puts everything he has behind his jabs, and he hurts his opponent. But the power shots that Martinez was hitting Edwards with was beautiful to behold. He was hitting Edwards with four to five left hooks in row thrown in rapid fire fashion. Edwards looked like a punching bag taking those shots.

“Who’s to say I wouldn’t have taken an eight count, and got up and recovered and gotten myself back together pushed on to the late rounds,” said Edwards. “I always start my fights early shaky. So I’ll sit down with my management team, my coach and Eddie and see what. I was taking a barrage of punches. It was like the Casimero thing again. He did hurt me, and him being so small. I went to grab him, but I didn’t feel confident grabbing a smaller guy. I find it hard to. It’s dangerous when you do that. So I though, ‘go down.’ It was a legit 3 to 5 seconds, wasn’t it? And to load up and stick to the side.

It feels like a movie. I don’t know what’s going on. We can go again. I’ve been in worst situations. I just have to sit back and decide what’s what. It’s a crazy story. Maybe it’s a step I have to take to inspire people. I don’t know what my team around me wants or what they’re going to advise me. But yeah, of course,” said Edwards when asked if he would give Martinez a rematch. “I’m a fighter. I’m still a world champion,” said Edwards.

If Edwards truly believes he was going to get up, and come back against Martinez, then he should take the rematch. Why duck Martinez if Edwards thinks he can win? But if Edwards ducks the fight, he’s done as a world champion. He’ll never win a world title at 115 in this writer’s estimation, and he’ll finish his career wishing he hadn’t vacated.

“We just ordered the rematch. It’a a direct rematch,” said Mauricio Sulaiman to secondsout about a Edwards vs. Martinez rematch. “It’s free negotiations. If there’s no agreement, then you go to a purse bid, but we’re sure an immediate rematch is going to happen. Can you imagine a kid that’s come all the way from Mexico. He’s declared the winner. He was clearly beating Edwards at the time, and he was declared the winner. His dreams are finally realized, and then it’s reversed. It’s not easy. But I talked to him [Martinez]. I explained to him, and I calmed him down. It’s a new era in boxing.

You have to look at the whole scenario. The whole 40 seconds before. If you just look at the isolated action, then you can make a case that it was intentional. You have to look at what happened in the last 40 seconds. He was beating Edwards, and then he was on the verge of knocking him out and winning the title. That was just a foul when it should not have been, and he just did not win the title,” said Sulaiman.