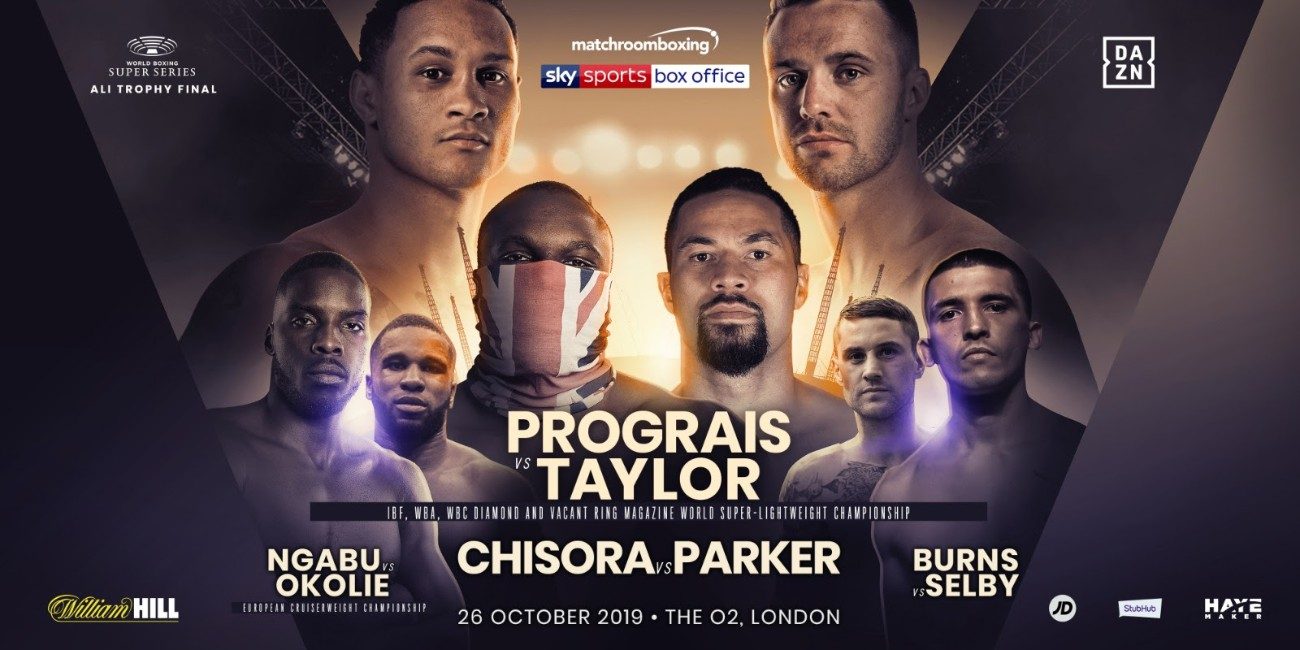 By Tim Royner: Dereck Chisora (31-9, 22 KOs) and his manager David Haye are predicting a knockout victory over former WBO heavyweight champion Joseph Parker (26-2, 20 KOs) next month on DAZN at the O2 Arena in London, England. The younger fighter Parker has never been knocked out before, and he’s faced better fighters than Chisora.

Dereck Chisora has found the Fountain of Youth

It would be a real plus if Chisora were to score a stoppage of the 27-year-old Parker, but anything is possible. Chisora seems to have found the Fountain of Youth lately, as he’s looking better now than he did 10 years ago. Whatever special training regimen Chisora is using, other fighters would like to know. He’s suddenly changed almost overnight.

Parker is the visiting fighter once again to England, and he could be asking for trouble. In his two previous matches in the UK, Parker lost to Dillian Whyte and Anthony Joshua. In both fights, there was questionable officiating by the referees that resulted in Parker getting beat. There’s no telling what would have happened with different referees.

The 35-year-old Chisora wants another world title shot, as it’s been seven years since he lost to WBC champion Vitali Klitschko in February 2012. After suffering a left shoulder injury in round 2, Klitschko out-boxed Chisora by turning southpaw and using his right hand as a jab for the remainder of the contest. Chisora hasn’t gotten close since then in fighting for a world title. When he’s stepped it up against Dillian Whyte, Kubrat Pulev and Tyson Fury, he’s lost. If Chisora were fighting back then like he is now, he might have beaten all those guys.

Parker vs. Chisora will be fighting in the co-feature bout on the Regis Prograis vs. Josh Taylor card on DAZN.

“In eight weeks, we’ve got Dereck ‘War’ Chisora going in there with Joseph Parker,” said David Haye to IFL TV. “I know it’s going to be a tough fight, win or lose, for Dereck, he’ going to go out blazing. He’s in good shape already. He wants that world title shot, and to get that, he needs to go out and make a statement. He’s trained hard. For me, he’s going to do it. He’s going to stop Joseph Parker in the late rounds. I’m very, very confident. I rate Joseph Parker. I’ve been a friend of his. When he was in England before, he used my gym. I’ve always given him advice on fights,” said Haye.

It’s going to be difficult for Chisora to KO Parker, because he’s not busy enough. Chisora lands hard shots, but he doesn’t have the high work rate needed for him to give Parker problems. It’s very likely that Parker will out-box Chisora just as Pulev and Fury both did. If Parker puts on Chisora with a furious all out attack, he could knock him out. Haye stopped Chisora in the 5th round with a brutal attack in July 2012. That’s the only time in Chisora’s career that he was knocked out.

Haye expecting a great performance from Chisora against Parker

“Just looking at both of their styles, if Dereck can do what I’ve seen behind closed doors,  and what I’ve seen in his last fight,” said Haye. “What he did against Szpilka was the tip of the iceberg. We’re really bringing out the best in him. For me, Dereck Chisora is going to do what he’s had deep inside of him for many years, but never got a chance to show. This is going to be the Dereck Chisora show at the O2 on October 26. Make sure you’re there,” said Haye.

Chisora defeated former heavyweight world title challenger Artur Szpilka by a 2nd round knockout on July 20 in London. However, Szpilka’s punch resistance is nowhere at this point in his career, and he’s been having that problem. Chisora is just one of many fighters that have KO’d the 33-year-old Chisora, and it’s clear that he has a problem. Haye says he’s seeing things from Chisora in training that has him excited, but that still doesn’t mean he’s going to beat Parker.

“Parker the Aussie kangaroo fled for the bush once already,” said Chisora via Michael Benson. “[Artur] Szpilka felt what ‘WAR’ Chisora is about, that was just 30% of what I’ve got for that Aussie bum. I’m going to knock Parker’s dingo a– out and send this Aussie chump back to the other side of the planet,” said Chisora.

Love this game so much can’t get enough of it #warchisora pic.twitter.com/tGz147wBnV

Other action on the Prograis-Taylor undercard:

Former three division world champion Ricky Burns (43-7-1, 16 KOs) fights former IBF featherweight belt holder Lee Selby (27-2, 9 KOs) in a 10 round fight. This will be at lightweight. Burns and Selby have seen better days, but this will still be a fun fight. Burns is coming off of an 11-month layoff since his 3rd round knockout of Scott Cardle on November 10. He’s won his last two fights since suffering a loss to Anthony Crolla in october 17. For his part, Selby won his last fight in beating Omar Douglas by a close 12 round unanimous decision last February. Douglas fought well enough to deserve a draw, but the judges saw it differently. The fight took place in London, England. Douglas is from the U.S.

EBU cruiserweight champion Yves Ngabu (20-0, 14 KOs) will be defending against #5 WBO, #12 WBC Lawrence Okolie (13-0, 10 KOs) in a 12 round fight. 2016 Olympian Okolie has a hard fight in front of him against the 33-year-old Ngabu, and he could lose. Okolie is all arms and legs, and looks uncoordinated still. He’s sound enough on offense and defense to be counted on to beat any of the elite level fighters in the cruiserweight division. Okolie’s promoter Eddie Hearn is his biggest supporter, and thinks the world f him. Unfortunately, he’s not show the talent to match the hype that his promoter has generated about him.