De La Hoya: Kovalev has a shot at knocking out Canelo 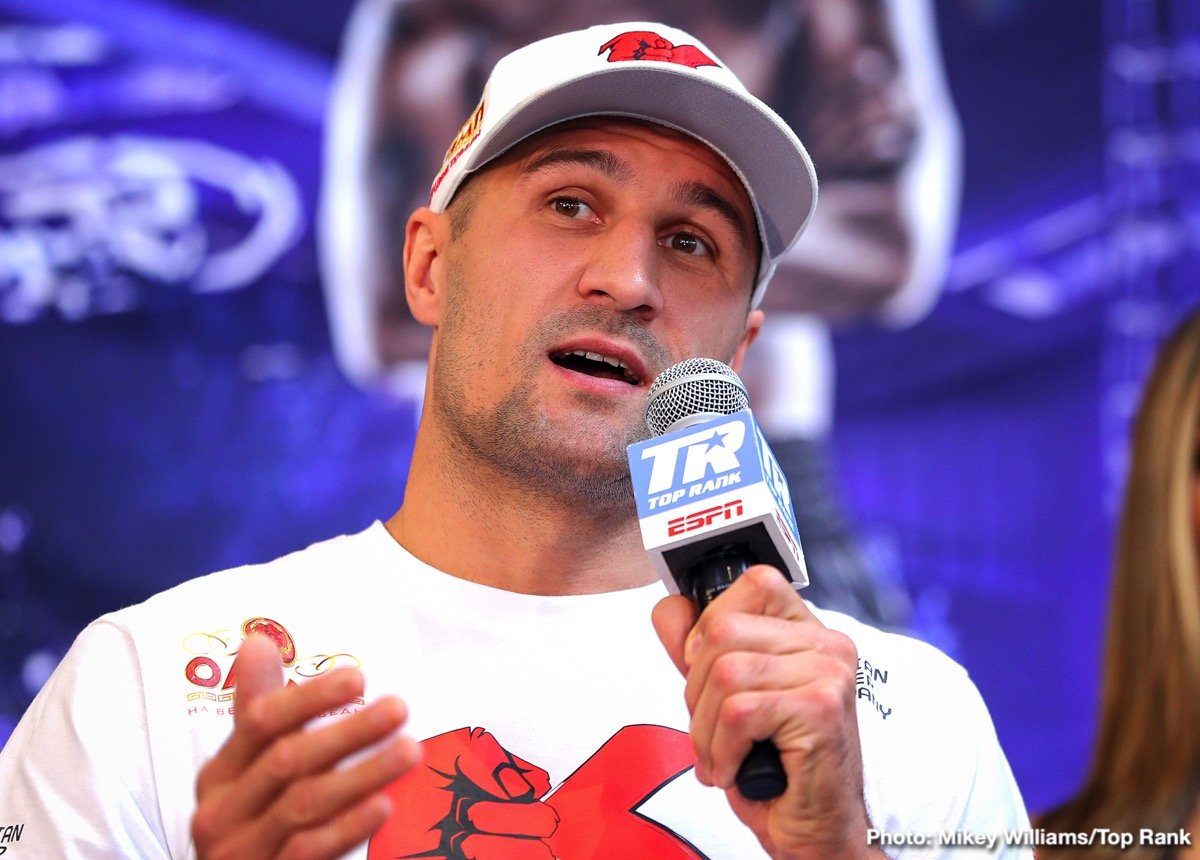 By Sean Jones: Oscar De La Hoya says he thinks WBO light heavyweight champion Sergey Kovalev has a real chance at beating challenger Saul Canelo Alvarez by knockout in their fight in less than two months from now on November 2 on DAZN. Although the big punching Kovalev (34-3-1, 29 KOs) is the underdog with the odds-makers, De La Hoya sees him as a real threat to beating Canelo.

The Mexican star Canelo has never been knocked out before during his 14-year pro career, but he’s been hurt by Jose Miguel Cotto, James Kirkland and Gennady Golovkin. Those guys failed to put it on Canelo hard enough to get them out of there. The 5’5 1/2″ Cotto, the brother of Miguel Cotto, ran out of gas after hurting Canelo early on. Canelo then came back to stop him in the 9th round.

“This fight is important to me because I want to make history.” @Canelo #CaneloKovalev media rounds have kicked off ahead of today’s press conference in #DTLA pic.twitter.com/bWXuCGWWMs

“Kovalev has a real shot to knock him out and beat him and people know that,” said De La Hoya to latimes.com

Most boxing fans will interpret Golden Boy Promotions boss De La Hoya’s comments as an attempt to pump up interest in the Canelo-Kovalev clash. Unfortunately for De La Hoya, a lot of people see Canelo cherry-picking an old timer on his last legs in Kovalev. Sergey almost lost his last fight against inexperienced Anthony Yarde on August 24 in Russia. Yarde hurt Kovalev in the 8th, and was battering him like a rag doll. If not for Yarde running out of gas, he would have finished Kovalev for sure.

“You will absolutely see Canelo and GGG fight next year,” De La Hoya said. “It could be in May or September, but that fight will happen. But Canelo’s fight with Kovalev is huge. I think it’s bigger than a fight with GGG. It’s a mega-fight.”

De La Hoya is getting a little carried away with himself in saying that the Canelo vs. Kovalev fight will be bigger than Alvarez’s fights with Gennady Golovkin. There’s no comparison. The amount of interest in both Canelo-GGG fights were huge months ahead of the clashes. In contrast, there’s almost no buzz at all about the Canelo vs. Kovalev fight for November 2. One reason for that is because Canelo chose not to fight the best light heavyweight. He picked an old guy in Kovalev, who has lost three fights in the last three years in defeats to Andre Ward [x 2] and Eleider Alvarez.

The amount of interest in the November 2 fight would likely be far greater if Canelo took on one of the still in their prime champions Dmitry Bivol, Artur Beterbiev or Oleksandr Gvozdyk. The hardcore boxing fan recognize those guys as the cream of the crop at 175, and very real threats to a short 5’8″ Canelo. But obviously he and his promoters at Golden Boy Promotions didn’t want any part of any of those guys; hence, he’s facing the weakest link among the 175-lb champions in Kovalev. It’s a weak move on Canelo’s part, but he seems to be more interested in just winning the belt to add a paper title to his resume.