What does the future hold for Gennady Golovkin? 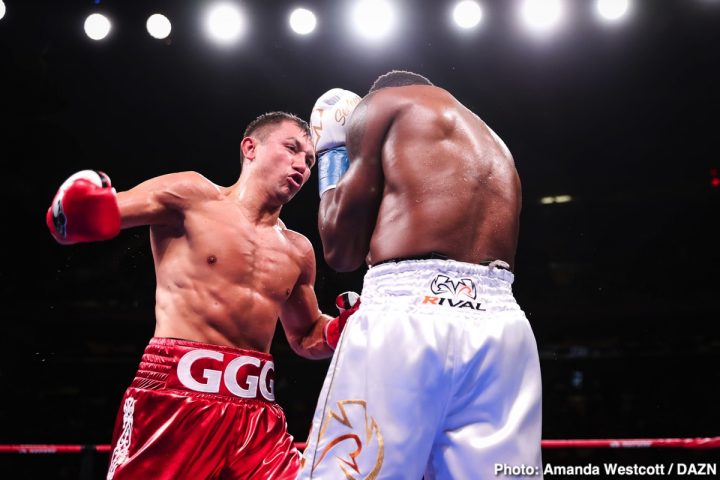 By Callum Barnett: With the recent news coming to light surrounding Gennady Golovkin (39-1-1, 35 KOs), and his partnership with Eddie Hearn, of Matchroom Boxing USA, it is expected the Kazakhstani boxer will be fighting Sergiy Derevyanchenko (13-1, 10 KOs). The fight is expected to be announced next week, and is set to be on October 5th in Madison Square Garden, New York.

This is a dangerous fight for both men, with the vacant IBF middleweight title at stake, anything but their best will be their downfall in this matchup. Golovkin should be taking this fight with the same determination, if not more, than when he thought Canelo Alvarez (52-1-1, 35 KOs) on both occasions. This title is a massive lifeline for Golovkin for the 3rd fight against Alvarez. It is no secret that the Kazakhstani boxer has wanted to finish off their trilogy and bag the win he felt he deserved in their first two meetings. Oscar De La Hoya, of Golden Boy promotions has clearly stated before that Golovkin must possess a world title if he wanted to fight Alvarez.

A few months back this seemed hugely difficult for Golovkin, being as Alvarez had majority of the belts. Just when it was hard enough for Golovkin, a second blow was delivered. With the WBC making the Mexican middleweight their franchise champion, Alvarez no longer needs to worry about mandatories from that governing body, further limiting GGG’s routes to that fight.

Should Golovkin beat Derevyanchenko, the IBF world title would give him a massive leg up and a great reason to fight Alvarez again, the Mexican wants his belt back and to do that, he’d have to go through Golovkin once more. However, this is no easy task. Golovkin must beat the Ukrainian Derevyanchenko first, which may prove an ultimate test of what GGG has left in his locker. With a tune up fight against the Canadian fighter Steve Rolls (19-1, 10 KOs), GGG switched up his style, leaving trainer Abel Sanchez for Johnathon Banks and becoming more of a combination fighter, rather than a heavy hitter. This begs the question of whether Golovkin can still compete with the big names in the middleweight division, and how his new style will fair against them.

GGG took some good punches against Rolls, punches that he shouldn’t take from more experienced fighters. Golovkin has to dig deep and really find his feet against Derevyanchenko if he wants to succeed, and prosper in the remaining years of his career. Should Golovkin lose to the Ukrainian, he may find himself never fighting for a world title again, setting himself further back once more.

Assuming Golovkin beats the upcoming Derevyanchenko, what pathways could he explore with his IBF title? Well, he has a surprising number of choices. As previously stated, Golovkin can use the belt as a bargaining chip to fight Canelo for the third time, setting up a climax to the trilogy. It’s this fight that Golovkin will earn big money once again, and should he lose, possibly retire on. However, with Canelo looking to fight Sergey Kovalev (33-3-1, 28 KOs) after the Russians bout with Yarde (18-0, 17 KOs) that route may have to wait for another day. So what else is there for Golovkin? Well, he could fight the new WBC world champion, Jermall Charlo (29-0, 21 KOs).

This would be a great opportunity for both fighters to gain another belt and make a massive PPV fight with Canelo in the future. With neither fighter being knocked out in their career, this would be an exciting firefight between two world champions in the middleweight division. Equally, Golovkin could target Demetrius Andrade (28-0, 17 KOs). Again, this would be an amazing fight to make, arguably Andrade is a bigger name than Charlo, especially since he won his belt, rather than was gifted it. With months of rumors surrounding a fight between Andrade and Alvarez, should GGG dethrone the WBO world champion, this limits what moves Alvarez can make to avoid the Kazakhstani.

Golovkin may also be interested in fighting the super welterweight champion Jaime Munguia (33-0, 26 KOs), who has expressed interest in moving up to middleweight on several occasions. Although not an easy fight for Golovkin, he may favor this bout as he would have the advantage of size and Munguia potentially not being able to transfer his skill-set up a weight class.

Finally, Golovkin could even move up a weight class himself, setting up a world title fight in the super middleweight division. GGG has the punch power as well as punch resistance to withstand a bout with a super middleweight champion, such as Callum Smith (26-0, 19 KOs), showing his worth and capabilities as a fighter, proving any doubters wrong over what he has left to give.

Only time will tell what route Golovkin will take, but if he wants to prove himself once more, he should be looking to take one of these routes. Golovkin is still one of the best middleweights out there, if he manages to prove it, the division is his for the taking once again.