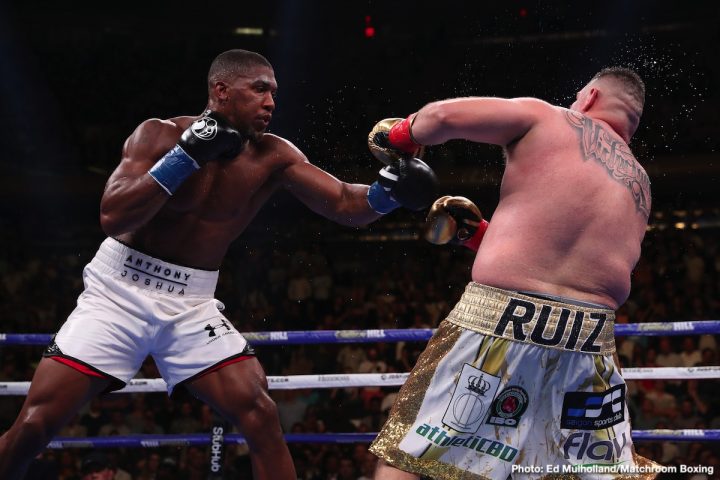 By Doug Berman: IBF/WBA/WBO heavyweight champion Andy Ruiz Jr. failed to start training camp on Monday like his trainer Manny Robles was hoping he would for his rematch with Anthony Joshua. Robles admits that Ruiz Jr. (33-1, 22 KOs) is not in great shape right now for the December 7th rematch with Joshua (22-1, 21 KOs). Robles states that Ruiz Jr. is working out on his treadmill at home, but he wants him to start training with him.

Andy Ruiz Jr. has been enjoying his new wealth

Ruiz Jr. has reportedly been living up with the millions he made from his seventh round knockout win over Joshua on June 1 in New York.  The Imperial, California native Ruiz Jr. bought a house, an expensive Rolls Royce, and other things. He’s not been training, and it appears that Joshua is well ahead of him in preparation. Joshua wants to avenge his loss, and win back his IBF/WBA/WBO titles.

The two fighters are supposed to be facing each other in Riyadh, Saudi Arabia, but Ruiz’s management still have more questions they need answers about from AJ’s promoter Eddie Hearn. Ruiz Jr. says he doesn’t want to fight in Saudi Arabia, and he may get his wish to fight elsewhere if he digs in his heels hard enough.

“He’s not in great shape, but he’s hitting the gym back home in Imperial. He’s running the treadmill, but obviously we haven’t fully begun training camp,” Robles said to ESPN.com.  “Once we do we have [close to] four months to get ready for a fight. That’s enough time to get him in shape. Let’s hope we can get him back in the gym real soon and get him going again. We’re working on getting back together this week,” said Robles.

The Snickers eating Ruiz Jr. looked out of shape last June, and he did an admirable job of knocking Joshua out in the seventh round. For all intents and purposes, Joshua had nothing left after three rounds, and that was with Ruiz weighing 268 pounds. For the rematch, Ruiz has four months to train to get in shape for the December 7th round. It may not matter how heavy Ruiz comes into the fight. He’s still going to be pure trouble for Joshua for three to four rounds, and that could be all it takes to beat him.

I’m not his lawyer, but I would argue that I don’t have to go fight him in Saudi Arabia, because the state department of my own country told me it’s too dangerous to go over, and no judge could make him do it. It’s like saying if you have a contract, you have to do it anyplace in the world, and they want to put it in a war zone. You don’t have to go and do it. Yeah,” Arum said when asked if that’s a way for Ruiz to get out of fighting Joshua in Saudi Arabia.

What Arum is saying is Ruiz Jr. has got leverage to use to get a better deal from Hearn for the rematch, and he could take advantage of that.

What it likely boils down to for Ruiz Jr. is the purse he’s being paid for the Joshua rematch. He’s reportedly getting $9 million for a fight that could bring in massive amounts of money. There’s no upside for Ruiz fighting in Saudi Arabia. If he’s not going to be able to share in some of the riches that the fight will bring in, then why fight there? Joshua’s promoter Eddie Hearn makes is stressing that Ruiz is getting his way by the fight taking place in neutral territory, but that obviously a good thing  if he’s not sharing in the big money.

If Ruiz’s purse is limited to what is stated in the rematch clause, then there’s no benefit of him fighting in Saudi Arabia. We could see Ruiz drag his feet on going there unless his purse is increased.