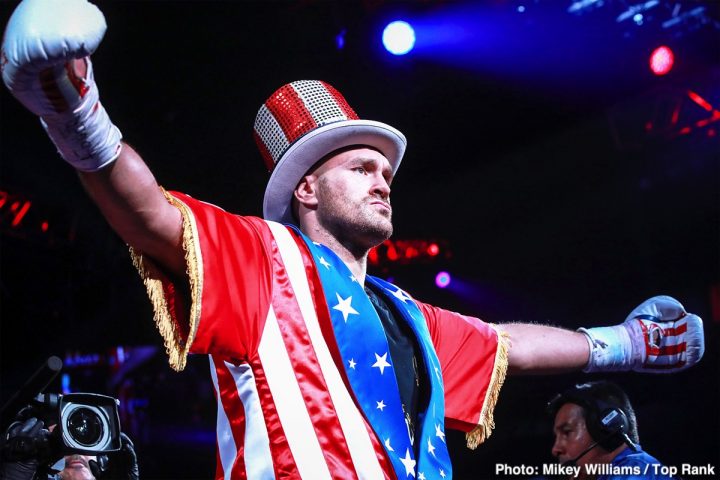 By Tim Royner: Tyson Fury says he’ll make easy work of heavyweight champion Andy Ruiz Jr. when the time comes for the two of them to fight. Fury, 31, isn’t impressed with Ruiz (33-1, 22 KOs), and he says he’d beat him with one hand tied behind his back.

With all the attention Ruiz has been getting with the fans, Fury may be feeling like the forgotten man. That might be one of the reasons why he’s been targeting Ruiz in the past couple of weeks.

BF/WBA/WBO heavyweight champion Ruiz is scheduled to face Anthony Joshua (22-1, 21 KOs) in a rematch on December 7 in Saudi Arabia. That’s going to be a tough fight for Ruiz, and if he loses then won’t be any need for Fury to face him.

“I will let the fans decide which hands to put behind my back and beat Ruiz with my other hand, because I only need one hand for him,” said Fury to TMZ.

“100 percent,” said Fury when asked if he plans on knocking out WBC heavyweight champion Deontay Wilder in their rematch on February 22 next year. “I think it’s going to be an expect fight. I’m really looking forward to the fight in September first, and then I’m going to knock Deontay Wilder out. But even if he knocks me out, I’ll still be looking forward to it, because that’s boxing. You win some and you lose some. Every great dynasty has to come to an end, but I don’t believe Deontay Wilder is going to put the Gypsy King to rest. No way,” said Fury.

Otto Wallin being ignored by Fury

Fury isn’t talking much about his next fight against unbeaten Swedish heavyweight Otto Wallin (20-0, 13 KOs), who he’s facing on September 14 on ESPN+. It’ possible that the huge amount of criticism that Fury has received over the Wallin fight has made him gun-shy when it comes to talking about him.

The Fury-Wallin fight is taking place at the T-Mobile Arena in Las Vegas, Nevada. If Fury wins the fight, he’ll be facing Deontay Wilder in a rematch on February 22 in Las Vegas. Wilder still needs to beat Luis Ortiz in November.

Fury is thinking a little too far ahead right now, because a lot of things must happen before he can face Ruiz. It’s a fight that would interest a lot of boxing fans, but it’s still too early to talk about Fury and Ruiz facing each other. The only way Fury and Ruiz wind up facing each other in 2020 is if they’re the last men standing.