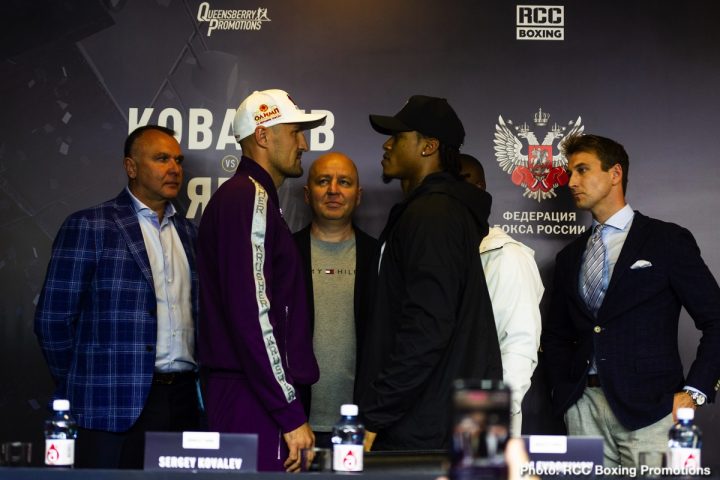 By Sean Jones: The odds-makers have Anthony Yarde (18-0, 17 KOs) creeping closer to favorite WBO light heavyweight champion Sergey Kovalev (33-3-1, 28 KOs) for their fight this weekend on August 24 in Chelyabinsk, Russia. Kovalev is the favorite at -157 in the odds while Yarde, 28, is at +143.

Yarde making a big step up in class

The odds-makers see some weakness in the 36-year-old Kovalev for them to be moving Yarde up. On paper, Kovalev has a huge experience advantage, which make it tough for Yarde to beat him on Saturday. Yarde has youth, power and the better engine going for him. That might be all it takes for the British fighter to pull off the upset against the aging Russian lion.

Kovalev vs. Yarde will be shown on ESPN+ in the U.S, and BT Sport 2 in the UK.

A loss for Kovalev would ruin his plans for a career high payday fight against Saul Canelo Alvarez in November. That’s the fight that Kovalev, and his promoters at Main Event and Top Rank are focusing on. It’s got to be hard for Kovalev knowing that he can’t afford a slip up against Yarde, because he won’t get another chance against Canelo if he loses.

“I understand Anthony Yarde’s ambitions. He calls himself a lion but to me he is a cub,” said Kovalev. “He is so young. I will have to get rid of all that baby fur off his skin so he will run away back home. It is clear he comes here and he wants to be like that. I have this experience. Now is my time.”

Kovalev recently won the WBO title in beating Eleider Alvarez by a 12 round unanimous decision in their rematch last February. It was like a brand new Kovalev, because he fought a lot smarter than he had in many years. In his first fight with Eleider last August, Kovalev lost a seventh round knockout in an upset loss.

The first face-off of the week between @KrusherKovalev and @thebeastyarde. 👀 An intense moment from the #KovalevYarde Press Conference that happened earlier today in Chelyabinsk. 🗣🇷🇺 #KovalevYarde | SATURDAY
📺: @ESPN+ 12:30PM ET pic.twitter.com/OpVynLyOHJ

Kovalev tried to slug with Eleider, and he was clipped by a big shot in round seven. He ended up getting knocked down three times in the round before the referee stopped the fight. In the rematch, Kovalev fought a smart fight staying on the outside, and using his jab.

Yarde recently beat 38-year-old Travis Reeves (17-4-2, 7 KOs) by a fifth round knockout last March. That was a step up fight for Yarde, who has been put in with lower level opposition by his promoter throughout his career.

Yarde be stepping into the lions den on Saturday

Kovalev will be fighting at home in Russia on Saturday, and there’s expected to be few Yarde fans that will make the long trip to see him. It’s going to be doubly tough for Yarde to beat the six-foot Kovalev, especially given that the fight is in Russia.  But this is Yarde’s moment, and he doesn’t plan on letting it slip away from him. He’s not intimidated by Kovalev, and he’s ready to take the WBO title back home to England after knocking him out.

Yarde has had little problems making his way to the World Boxing Organization mandatory position. He’s beaten a number of decent trial horses without any hiccups. On Saturday, he’s going to need to be ready for a tougher fight than what he’s become accustomed to. This moment has come a little early for Yarde in challenging Kovalev for the WBO title. It would have been better if Yarde picked up a few solid wins over contenders before challenging Kovalev for his title. However, he couldn’t afford to do that. With Kovalev a vulnerable champion, Yarde might have missed his chance.