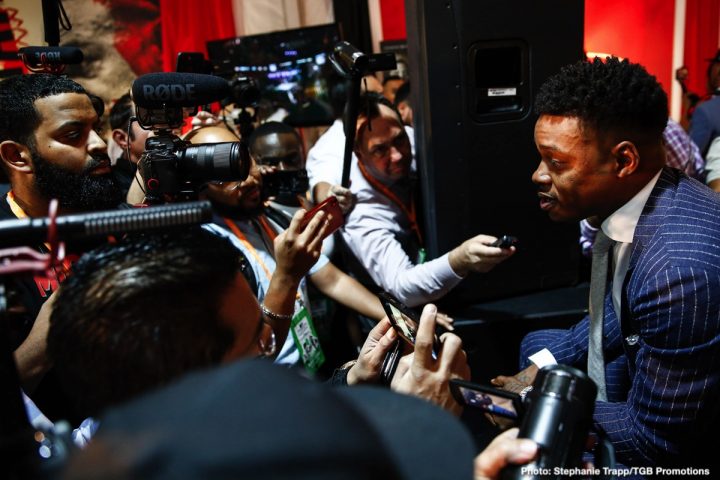 By Mark Eisner: ESPN commentator Tim Bradley says IBF welterweight champion Errol Spence Jr. is ducking WBO champion Terence Crawford, and he feels sure of that. Bradley is upset that Crawford’s name wasn’t mentioned recently by PBC on Fox broadcast as one of the champions at 147. Tim wonders whether PBC is creating their own world of boxing by not mentioning other fighters like Crawford (35-0, 26 KOs). who fights for Top Rank on ESPN.

Bradley recently picked former WBA Super World welterweight champion Keith ‘One Time’ Thurman to beat 40-year-old Manny Pacquiao in their fight last month. Pacquiao proved Bradley wrong in beating Thurman by a 12 round decision to dethrone him, and mar his perfect 29-0 record. Bradley is now predicting that Crawford would hurt Thurman with body shots, and he hints that Pacquiao ducked Terence. Pacquiao never fought Crawford when the two were both with Top Rank at the same time.

“Terence Crawford and Errol Spence are the two best welterweights in the game right now, period,” said Bradley to AB Boxing News. “Then you’ve got Manny Pacquiao with along with them. Okay, I don’t know how it went down, but he didn’t fight Terence Crawford. To me, that tells me something. I can’t put Pacquiao over Terence Crawford. I can’t. Then you look at Errol Spence, what has he done so far?

It’s not equal to what Pacquiao has done, but he’s the younger gun, he’s the bigger guy. He has the style that can give Pacquiao problems. In the Mikey Garcia fight, you saw that he threw over 1,000 punches. So he has the output. He has the know how. He can give Pacquiao more than enough resistance, and probably pull off the win without a doubt in my mind. But TC [Terence Crawford], to me, and Errol Spence are the two best guys [at 147],” said Bradley.

There’s a very good chance that Spence (25-0, 21 KOs) will beat Pacquiao (62-7-2, 39 KOs) if the Filipino star chooses to fight him. Spence is too big, too strong and too talented with his boxing skills right now for Pacquiao. It’s still a little early to predict whether Pacquiao will take on the winner of the September 28th fight between Spence and WBC welterweight champion Shawn Porter. Pacquiao needs to make a decision soon, because if he doesn’t fight the Spence-Porter winner, he’ll need to face someone like Danny Garcia. It would look bad for Pacquiao if he faces Amir Khan, because he was recently beaten by Crawford last April.

“I don’t think we’ll ever see them fight. I really don’t, said Bradley about Spence and Crawford. “It’s terrible. Those guys should fight. The economics of boxing. That’s just the way it is, I guess. It freaking sucks. I want to see you guys get in, and stop saying you’re #1. You fight Terence Crawford, and you fight Errol Spence. I know Terence wants the fight, but Errol ain’t saying nothing. Come on, you know what I’m saying? Terence, he’s been saying, ‘I want this fight. I want the Errol Spence fight,’ but they’re not answering that phone. They don’t want to do business,” said Bradley.

Bradley is sounding a little frustrated at the Spence-Crawford fight not getting made yet. For a lot of boxing fans, they want to see Spence and Crawford battle it out in a unification fight, but the match needs to be built up more. Spence wants to grab the WBC belt from Porter (30-2-1, 17 KOs) in their unification fight on September 28, and then there’s Pacquiao he can possibly fight. Moreover, there’s other fighters from Premier Boxing Champions’ stable for Spence to fight like Danny Garcia and Yordenis Ugas.

Once Spence cleans out his side of the welterweight division, he’ll likely be ready to face Crawford. For his part, Terence needs to clean out the guys that Top Rank can match him against on his side of the street. That means Crawford needs to beat Luis Collazo and Egidijus Kavaliauskas. Those aren’t big names, but they’re at least someone that Crawford can fight to get some attention.

“This is the world of boxing. It makes me sad when I watch a boxing event, and they don’t even have a champion like Terence Crawford in their lineup. That pisses me off. I’m like, ‘what are you doing? Do you have your own world of boxing over there? You have your own thing going on.’ It’s horrible, man. It’s not right, but it is what it is. I guess that’s what we’re going to say. It sucks,” Bradley said.

Spence is doing what he has to do in beating the popular PBC fighters. If Crawford were in the same position Spence is in now in being signed with PBC, he would be doing the same thing. If the commentators on Fox aren’t mentioning Crawford, then it’s understandable why they wouldn’t. Crawford fights on ESPN. It doesn’t make sense for a Fox broadcaster to be talking about fighters that compete on a different network, because that be steering the fans away.

Bradley: Porter is going to give Spence problems

“Listen, Porter is a nightmare for anybody,” said Bradley in talking about the September 28th fight between Spence and Shawn Porter. “He’s rough and tough, and he comes to fight. And, he’s in shape like hell. He’s going to give Spence a run for his money. You can’t count him [Porter] out. He always figures out a way, but who do you think is going to win that fight? If you had to pick Porter or Spence, who do you think? Of course, but you could and we all could be wrong,” said Bradley when told that Spence will likely beat Porter. “It’s what you like, what you see, and what you envision,” said Bradley.

Most boxing fans would disagree with Bradley’s opinion that Porter will give Spence problems. The only thing one can say about Porter is he could give Spence problems when/if he tries to rough him up. Porter will Spence a lot of issues if he head-butts him repeatedly, and hits him with elbows all night. Spence will have problems with that type of fighting style. Bradley’s prediction about Spence-Porter and Crawford-Thurman can be overlooked by boxing fans given his wrong prediction on the Pacquiao-Thurman fight. Bradley was dead wrong in predicting that Thurman would beat Pacquiao.

“I picked [Keith] Thurman [to beat Pacquiao], because he was younger, bigger, stronger, and a bigger puncher,” said Bradley. “I thought he’d be able to backup Pacquiao, which he did in spots. And, I thought he’d be able to put a move, and get back out and catch Pacquiao when he was coming in, which he didn’t. He [Thurman] pulled straight back. He made the same mistake over and over again.

I thought he was a lot smarter than that, and he wasn’t. We can pick and choose. I was wrong for picking Thurman, but I knew I was wrong. And, I knew I was out on the limb. I knew it was a 50-50 fight, but I was going with the younger gun. I didn’t score the fight. There was probably a two to three round difference after watching the fight. The knockdown [in round one] was really the icing on the cake. Thurman came on strong in the back end, but gave it up again and got hurt with a body shot.

You [Thurman] get in there with Terence Crawford? Come on now. Body shot? If he [Crawford] saw that [he would be looking to take advantage of it in a fight against Thurman]. I saw that body shot, and I was like, man. They were saying that dude was better than me. You crazy? I’m the body snatcher,” said Bradley in inserting himself into the equation.

Crawford might be able to hurt Thurman with body shots, but he could could get hurt by his shots. Jose Benavidez gave Crawford a lot of problems last October. Thurman hits harder than Benavidez.