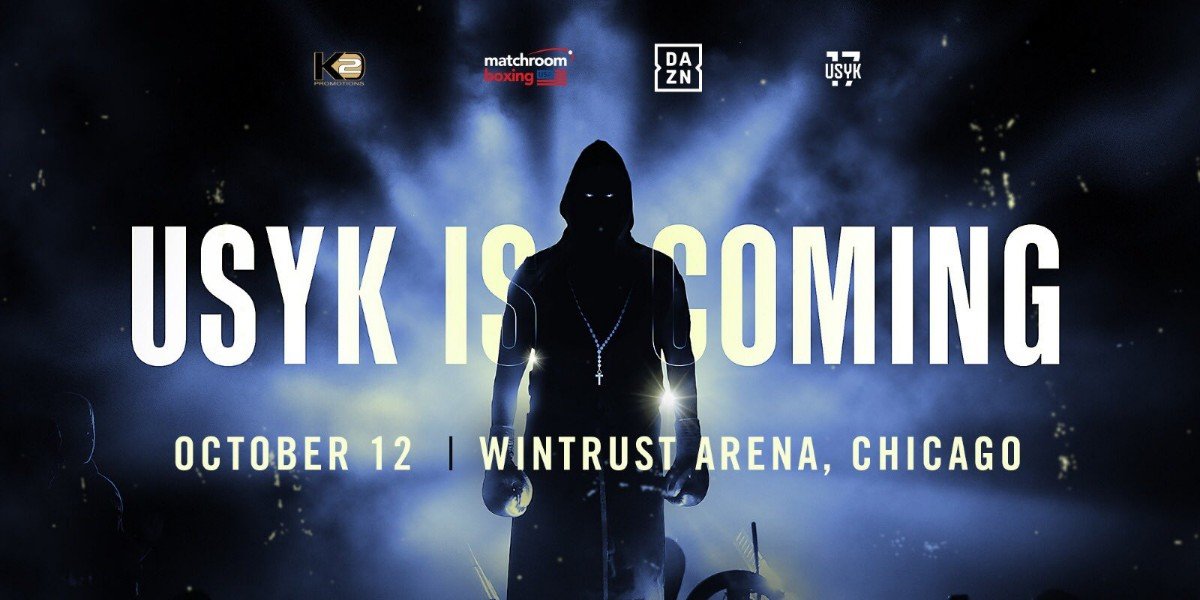 By Mike Smith: With just 6 1/2 weeks to go before former cruiserweight champion Oleksandr Usyk’s heavyweight debut on October 12 on DAZN, he still doesn’t have an opponent for that fight. Usyk will be fighting at the Wintrust Arena in Chicago, Illinois. There’s a chance that Usyk could face lower level heavyweight Andrey Fedosov (31-3, 25 KOs) on October 12. Usyk doesn’t want the fight with Fedosov.

The 32-year-old Usyk was supposed to battle former world title challenger Carlos Takam on May 25. Unfortunately, the bout failed to happen after Oleksandr suffered a biceps injury in working out.

After the bicep injury healed, Usyk’s promoters wanted to reschedule with the 38-year-old Takam. However, he signed with Star Boxing, and they chose to go in another direction. That left Usyk without a well known opponent. Takam is only well known with hardcore boxing fans, but he at least had that going for him.

It wasn’t a great loss though, considering that Takam had been knocked out in 2 out of his last 3 fights. Usyk would have been in a tough situation to try and get credit for beating Takam. The only thing Usyk could have hoped for is to knockout Takam faster than Dereck Chisora and Anthony Joshua did. Usyk wasn’t a big puncher even at cruiserweight, so his chances of stopping Takam quickly would have been zero.

The unbeaten 2012 Olympic gold medalist Usyk (16-0, 12 KOs) needs a credible opponent for validate him in the eyes of the public. It’s important he’s been made the mandatory for WBO heavyweight champion Andy Ruiz Jr. Usyk hasn’t ever fought at heavyweight before, but the World Boxing Organization made him the mandatory.

In the eyes of fans, it looks bad in Usyk being given a #1 ranking with the WBO without experience at heavyweight. The divisions are so far apart that it doesn’t make sense for Usyk to be vaulted into the #1 spot with the WBO at heavyweight.  It makes Usyk, the WBO and Matchroom look bad with that ranking. It’s not fair to the hard-working contenders in the WBO’s rankings, who have labored hard to try and get the #1 ranking at heavyweight.

After the fight with Takam fell out, there was talk of Usyk facing 2nd tier heavyweight Andrey Fedosov. Usyk doesn’t want to fight the Russian Fedosov, because he wants to avoid problems between his country and Ukraine, according to a source from Dan Rafael at ESPN.  If Usyk’s co-promoter Eddie Hearn at Matchroom Boxing push hard enough, it’s possible he could persuade him to take the fight with Fedosov.

The positive about Fedosov is he’s been around for awhile, and has wins over the following journeymen opposition:

Fedosov is a proven journeyman beater, but he comes apart when he faces halfway decent opposition like Bryant Jennings. He was stopped in six rounds by Jennings in 2013 in a fight that was a complete mismatch.