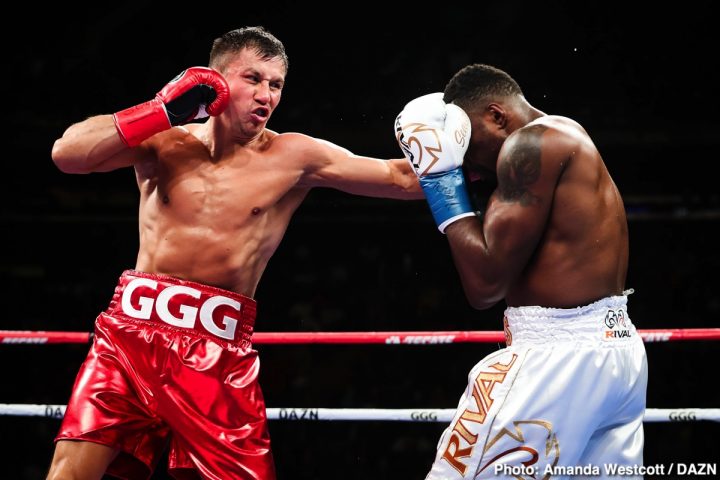 By Barry Holbrook: The IBF ordered on Monday morning a fight between Gennady Golovkin and Sergiy Derevyanchenko for the vacant International Boxing Federation middleweight title, according to Dan Rafael. If the negotiations are successful, the fight will take place on October 5 on DAZN. This will Golovkin’s second fight of his six-fight deal with DAZN. In his first match with them, he defeated Steve Rolls by a fourth round knockout last June. GGG wanted to fight Saul Canelo Alvarez in a trilogy match on September 14, but the Golden Boy Promotions star opted not to make the contest with him at this time.

The management for GGG and Derevyanchenko have 30 days until September 4 to try and put together a deal. If a deal isn’t done by then, it’ll go a purse bid. Derevyanchenko’s promoter Lou DiBella is confident that he’ll be able to make a deal with GGG’s promoters to get the fight done, according to ESPN.

This is the IBF title that was stripped recently from champion Canelo when his promoters at Golden Boy Promotions were unable to put together a deal with Derevyanchenko.

At the last moment, Golden Boy attempted to get an exemption by the IBF so that Canelo could face WBO middleweight champion Demetrius Andrade in a unification fight. Golden Boy didn’t put the request in early enough for the IBF to grant them permission. It’s unknown whether Canelo will fight Andrade now that he’s been stripped of his IBF title.

With the IBF ordering GGG-Derevyanchenko fight, Golovkin (39-1-1, 35 KOs) gets a chance to win a world title that he can use to persuade Canelo to face him in a trilogy match. At this point in Canelo’s career, he wants to fight for world titles, and not just make matches against popular guys. GGG can now potentially put punch his ticket for a third fight with Canelo if he beats Derevyanchenko. That’s a big IF, because Derevyanchenko is a smart fighter, who knows how to win. He came up short against Daniel Jacobs, but it was a close affair. Some fans feel that the Jacobs-Derevyanchenko fight was as close as the Golovkin vs. Jacobs contest in 2017.

The judges gave Golovkin the victory against Jacob, but it could have gone the other way. Derevyanchenko has the ring IQ to beat Golovkin, especially if the Kazakh fails to made adaptions he needs to for him to win. What kept Golovkin from beating Canelo in their two fights was his failure to adapt during those matches. GGG never switched to a Plan-B when Canelo started getting the better of him. Whether that was the fault of Golovkin’s former trainer Abel Sanchez or his own is debatable.

The fact is, Golovkin didn’t adapt in either of his fights with Canelo, and he deserved losses. Derevyanchenko is a smart fighter, who is able to switch game plans at the drop of the hat. That’s what makes him such a good fighter. Derevyanchenko’s not the most talented guy in the middleweight division, but he’s incredibly smart, and knows how to find the weaknesses of his opponents.

The criticism that many boxing fans have in Derevyanchenko being given another chance at fighting for the IBF title is he lost last October to Daniel Jacobs in a fight for the vacant IBF middleweight strap. It’s now nine months later and Derevyanchenko is getting a second shot at fighting for the IBF world title. It’s almost unheard of to see a fighter getting two shots at the same title within a year. The IBF made the decision to rule a fight between Derevyanchenko and Jack Culcay be a title eliminator last April. Derevyanchenko subsequently defeated Culcay (26-4, 13 KOs) by a 12 round unanimous decision to become the IBF mandatory challenger to then champion Canelo Alvarez.

“As long as the Franchise tag is used very carefully,” said Top Rank Boxing promoter Bob Arum to IFL TV. “For a fighter like Canelo, yes. One thing you can’t do with a fighter that has achieved elite status is to burden him against mandatory’s that are just also-rans, particularly now that there are four champions with four organizations. Then when you do down a little deeper, you get terrible mismatches. To force a champion to waste his time with mismatches is not really good for the sport. I’m not criticizing the IBF, because they follow their rules, but that doesn’t mean the rules are good for the sport.

You have Derevyanchenko, who lost when he fought [Daniel] Jacobs. Now suddenly Derevyanchenko again becomes a mandatory, and you say, ‘unless you fight him you’re going to lose you title.’ Why? He lost to Jacobs. You [Canelo] beat Jacobs. Give us somebody else to fight or stay away and let us choose who the best opponent is. That seems to me the better course. When a lot of these organizations, unlike the IBF, had discretion, they abused it by making wacky guys the #1 contenders. So it’s a system that has to be revamped,” said Arum.

Derevyanchenko, 33, is lucky that the IBF continues to give him chances to fight for their belt, because he arguably should be at the back of the line after his loss to Jacobs. When Shawn Porter lost his IBF welterweight title to Kell Brook in 2014, he was dropped to the bottom of the rankings by the IBF. Derevyanchenko loses in a bid for the vacant IBF title to Jacobs, and then he’s fighting in an eliminator against Culcay in his next fight. It’s interesting how Porter and Derevyanchenko were handled differently by the same organization.

“In the meanwhile, awarding a Franchise tag to Canelo, that was good, because, as far as the WBC is concerned, it relieves him from fighting mealiness mandatory’s,” said Arum. “If [Vasiliy] Lomachenko beats [Luke] Campbell [to win the vacant WBC lightweight belt], he’ll have three world title belts, and then his next fight should be against the IBF champion, whether it’s [Richard] Commey or Teofimo Lopez. If he by then is the unified champion with our belts, by all means he shold be the Franchise champion; not fighting meaningless mandatory’s. Lomachenko, in my opinion, is one of the greatest fighters of our time.

Why would you want to waste his time fighting mandatory’s who are not competitive? For example, I was forced to to put a fight of his against an English guy [Anthony] Crolla. Now Crolla is a good fighter, but he doesn’t belong in the same ring as Lomachenko. Not yet,” Arum said when asked if WBC heavyweight champion Deontay Wilder should be awarded the Franchise tag by the World Boxing Council. “If Deontay Wilder is able to beat Tyson Fury, which I don’t believe will happen. If he beats Tyson Fury, and goes on to win another belt, then yeah, he should be a Franchise Champion, just in the way Lomachenko should be, if he does all of those things, be Franchise Champion,” said Arum.