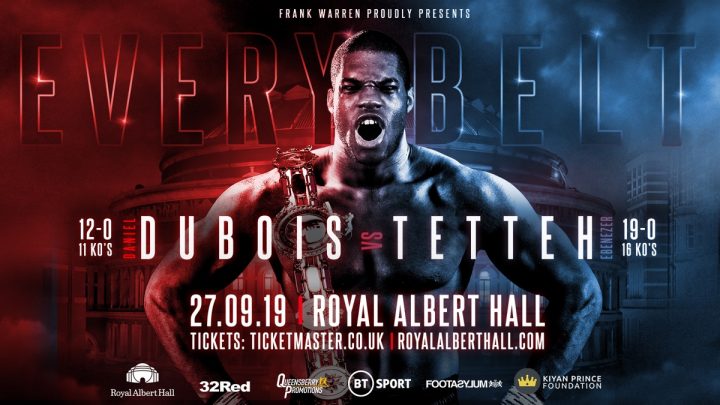 Daniel Dubois Will Bid To Add The Commonwealth Heavyweight Title To His Belt Collection And Wbo Female Flyweight Champion Nicola Adams Will Be In World Title Action When Boxing Returns To The Royal Albert Hall On Friday September 27, Live On Bt Sport.

British Champion Dubois 12-0 (11kos), Who Defeated Domestic Rival Nathan Gorman In A Thrilling Encounter At The O2 Arena In July, Will Seek To Win An Incredible Seventh Title In Just His 13th Professional Fight When He Takes On Ebenezer Tetteh For The Vacant Commonwealth Crown.

Previous Commonwealth Champion Joe Joyce Has Relinquished The Title And The Match Between Dubois And Tetteh Has Been Mandated By The Commonwealth Boxing Council, Subject To The Unbeaten Ghanaian Successfully Coming Through A Scheduled Fight On August 10.

Promoter Frank Warren Also Has A Tentative Agreement For Adams To Be Involved In A Unification Clash Against The Winner Of The August 16 Clash Between Argentina’s Ibf Champion Leonela Paola Yudica And Mexican Isabel Millan, Who Nicola Beat For Interim Title – Providing The Winner Comes Through Unscathed.

If The Winner Is Unavailable Through Injury For The London Date Next Month, Nicola Will Defend Her Wbo Crown At The Royal Albert Hall And Her Next Fight Will Be A Unification Match.

Tetteh, 19-0 (16kos), From Accra Will Be The Second Ghanaian Opposition Attempting To Derail Dubois, Who Stopped The 31-year-old’s Countryman Richard Lartey In April To Win The Wbo Global Title.

“This Is A Natural Progression For Me Because I Want To Win Every Title Available To Me On My Way To Becoming A World Champion,” Said Dubois On His Latest Assignment.

“I Have Won The Southern Area, English And British Titles Already, So I Am Heading Down What People Call The Traditional Route, While Also Gaining International Experience And Rankings By Winning The Wbc Youth, Wbo European And Global Titles.

“So I Believe This Is The Ideal Next Step For Me Against An Unbeaten Fighter With A Lot Of Kos To His Name.

“It Should Make For An Exciting Fight At The Royal Albert Hall And I Cannot Wait To Get Back There And Do My Thing.”

The Golden Girl Of British Boxing Will Be In World Title Action At The Royal Albert Hall In The First Ever Female Professional Boxing Match At The Historic London Venue.

Warren Added: “I Am Delighted To Be Taking Another Top Show Back To The Royal Albert Hall, Which Is Such A Special Venue For Boxing.

“It Is Another Ideal Test For Daniel In Fighting For The Vacant Commonwealth Title Against Another Dangerous Opponent From Ghana. If This Turns Out To Be Anything Like The Richard Lartey Fight Then The Fans Are In For A Treat.

“The Name Of The Game For Daniel Now Is For Us To Keep Stepping Him Up And Him Picking Up Experience. It Is Only A Matter Of Time Before He Will Reach A Mandatory Position For A World Title.

“Nicola Is Already In Possession Of A World Title And I Am Sure She Will Want To Confirm Her Status With A Fine Performance In The Ring.

“It Is Only Onwards And Upwards For Our Leading Lady Now And This World Title Is Just The Beginning For Her.”

The bout was mandated by the Commonwealth Boxing Council after Joe Joyce relinquished the title.

Adams who was elevated to WBO female flyweight champion last week, by virtue of her Interim title status will be in world title action, possibly in a unification showdown.

There is a tentative agreement for Adams (5-0, 3KOs) to meet the winner of the August 16 clash between Argentina’s IBF World champion Leonela Paola Yudica and Mexican Isabel Millan, who Nicola beat for interim title — providing the winner comes through unscathed.

If the winner is unavailable through injury for the London date next month, Adams will defend her WBO crown at the Royal Albert Hall and her following fight will be a unification match.

Here are a selection of quotes.

FRANK WARREN
“Daniel is one of the youngest boxers to ever win the British heavyweight title and the way he has beaten people tells you he is going places. His next fight is his 13th fight and if he wins he will have won seven belts and I can’t think of too many heavyweights who have done that so soon and gone into ten and 12 rounders so young in their career. You have to remember he only had seven senior bouts as an amateur. He still has a long way to go and there are things he needs to work on, but his trainer Martin Bowers has done a fantastic job. This isn’t a 100 metre race. He has got to be equipped not to just fight for a world title, but win it and defend it. Tetteh is banger and if he is anything like the last Ghanian that Daniel fought, Richard Lartey you are going to get entertainment. Daniel is for real and the most exciting young heavyweight I’ve been involved with. You feel there is a sense of anticipation and electricity when he gets in the ring.

We have got to get Nicola back on it. She has history with two Olympic golds and this is her chance to hopefully unify in what will be a historic night with the first ever world title fight between two women boxers at the Royal Albert Hall. She has got to go out there and show everyone what she can do. I want to see her fighting regularly. The Royal Albert Hall is a fantastic venue. I call it a posh York Hall.”

DANIEL DUBOIS
“I’m following in some pretty big footsteps like Lennox Lewis and Muhammad Ali who fought at the Royal Albert Hall, although Ali boxed exhibitions. Myself fighting there is testament to the work I put in to be successful. I want to climb to the top and be world heavyweight champion. The only way to do that is to come through these guys like Tetteh and win well. I feel the best is yet to come. Beating Nathan Gorman was a good win. Some things I did well like pumping the jab out and I was very determined. My overall strength and ability was too much for him. I feel I’m getting close to my goal of being world champion. It’s nice that the hard work I put in is getting rewards. I’m on a journey and loving it. If he is like another Ghanaian I boxed, Richard Lartey I need to sharpen up on a few things and I might get him out of there quicker.”

NICOLA ADAMS
“I really want to do this. It has been my ambition since I turned professional to unify the division. I want to put on a show. I couldn’t ask for more than boxing at the Royal Albert Hall. Muhammad Ali was my hero growing up and to be able to box at the same arena as he did is special. I plan on winning and unifying would be two belts for the price of one. I just want to keep collecting and getting all the titles. I am learning all the time, cut out a lot of my amateur traits and it’s been a learning curve. I am improving and taking it to the next level. If my opponent is Yudica I know how tough it will be, but I have a A, B, C, D and E game plan. I will have an answer for everything she throws.”

Tickets For The September 27th Bill At The Royal Albert Hall Will Be Available To Purchase From Www.ticketmaster.co.uk And Www.royalalberthall.com On Pre-sale Sale This Wednesday (August 7) Wednesday & On General Sale From 1pm This Friday (August 9). Prices £40, £50, £75, £100 £150 – Ringside