Canelo Alvarez wants to wait on Kovalev vs. Yarde results before he schedules next fight 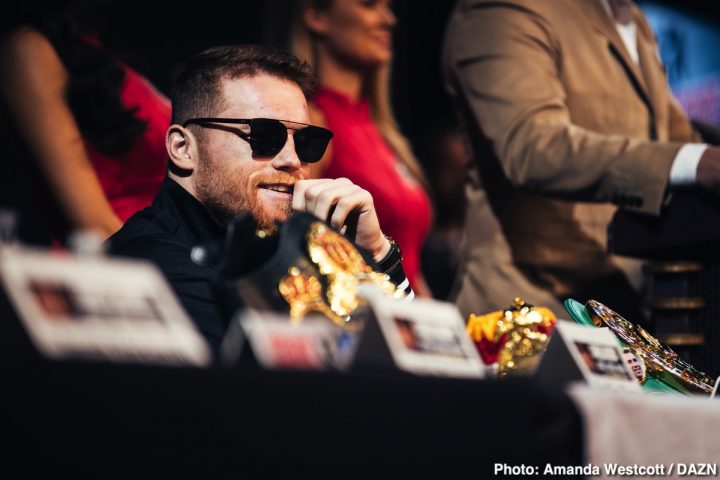 By Sean Jones: Saul Canelo Alvarez won’t schedule his next fight until he finds out the outcome of this month’s bout between WBO light heavyweight champion Sergey Kovalev and Anthony Yarde. Those two will be fighting on August 24 in Russia, where Kovalev will have a large fan turnout.

Canelo has a lot of different options available to him, but Kovalev is the guy he wants. They were in negotiations recently, but Kovalev had to get his defense against his mandatory Yarde out of the way first. Kovalev also failed to agree to the money offer that made to him by Golden Boy to face Canelo.

At this point, it’s going to be fun to see if Golden Boy can negotiate a fight with Kovalev without the negotiations going up in smoke. Canelo reportedly wasn’t happy at being stripped of his IBF title after Golden Boy couldn’t put a fight together with his IBF mandatory Sergiy Derevyanchenko. Before that, they couldn’t get a deal done with Kovalev.

“On very good authority, @TheAthleticBOX has been told Canelo wants to first wait to see if Krusher Kovalev comes out with a clean victory in Russia August 24. If he does, a Canelo-Kovalev fight would be eyed on DAZN USA in November. And if Canelo can land the Krusher Kovalev fight, it keeps with his effort and that of trainer Canelo Team to engage in legacy bouts as they’d chase a belt in a fourth division,” said @pugboxing.

If Kovalev does beat Yarde, then Canelo will schedule a fight against the Russian in November on DAZN. What this means is Canelo probably isn’t going to be fighting WBO middleweight champion Demetrius Andrade next. Andrade’s name was mentioned recently in connection with a unification match against Canelo.

It would be a disappointment for Canelo if Kovalev loses to Yarde, because he’s got his eyes set on fighting him. The way that Kovalev has been performing for the last three years, you cant rule out him losing to Yarde. Andre Ward didn’t do anything special in beating Kovalev twice. In the first fight with Kovalev, Ward wrestled him into a state of exhaustion, and won a close 12 round decision in 2016. In their rematch in 2017, Ward hit Kovalev with a right hand to the head that staggered him. From there, Ward hit Kovalev with a series of low blows that triggered the referee Tony Weeks to respond by stopping the fight.

Derevyanchenko no longer in picture for Canelo

The IBF failed to grant the exception, so Canelo was stripped of his title with their organization. Canelo and his promoters at Golden Boy missed the deadline. Now that Derevyanchenko is no longer in the picture, Canelo is going in another direction.

Canelo Alvarez (52-1-2, 35 KOs) wants the Kovalev fight, because his goal is to win another division world title. Kovalev is unquestionably the most vulnerable of the 175 pound champions today. Clearly, he gives Canelo his best shot at winning a fourth division world title.

Kovalev will be defending against the 27-year-old unbeaten mandatory challenger Yarde on August 24 on ESPN+ at the Traktor Sport Palace, in Chelyabinsk, Russia. Kovalev should win. Time hasn’t been kind to the ‘Krusher’ Kovalev, and he’s not the fighter that was demolishing his opponents one by one from 2009 to 20015.

Kovalev has gotten older, and tasted defeat several times against Andre Ward and Eleider Alvarez. With his new trainer Buddy McGirt, Kovalev was able to turn things around in his last fight in beating Eleider. Kovalev defeated the Canadian by a 12 round unanimous decision last February to avenge his earlier loss to him.

Canelo might have problems with the punching power of Kovalev. On paper, Kovalev is a more dangerous fight for Canelo than Andrade or Derevyanchenko, because of his power. There’s a a risk involved for Canelo in fighting Kovalev, given that he has such heavy hands, and he’s rangy. Kovalev would easily be the best boxer that Canelo has faced since his loss to Floyd Mayweather Jr. in 2013.

”I won! He wants a rematch, not me,” Pascal said to badlefthook.com about his victory over Marcus Browne. ”If Canelo wants to test the waters at 175 pounds, I’m ready!”

Newly crowned interim WBA light heavyweight champion Jean Pascal (34-6-1, 20 KOs) has extended an invitation to Canelo Alvarez. He says that Canelo can face him if he decides to come to up 175. Pascal, 36, defeated Marcus Browne (23-1, 16 KOs) by an eighth round technical decision last Saturday night.

Although there’s talk of Browne wanting an immediate rematch, Pascal has bigger goals in mind. Pascal wants to defend against Canelo, and he’s ready to do it. However, Canelo wants to fight a world champion that has full possession of a title belt at 175. Pascal doesn’t meet those requirements at this time, because he’s just an interim champion with the WBA.

Pascal is rugged, power, and smart. He bide his time, and wait for an opening to nail Canelo with one of his big shots. Pascal would be willing to take more risks against Canelo than Gennady Golovkin and Daniel Jacobs did. Jean is fearless, and he has a good chin. There’s less for Canelo to gain in him facing Pascal. Kovalev defeated Pascal twice, and Bernard Hopkins beat him as well.