Jaime Munguia vs. Patrick Allotey on September 14 on DAZN 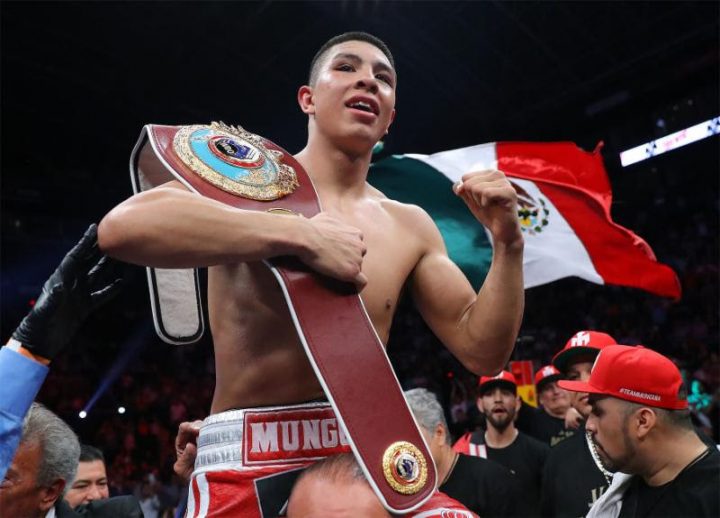 In the co-feature bout, unbeaten lightweight contender Ryan Garcia (18-0, 15 KOs) will be facing Avery Sparrow (10-1, 3 KOs). The venue for the Munguia vs. Allotey card is at the Stub Hub Center in Carson, California.

It’s interesting that Munguia, 22, is the one that is taking the September 14 holiday date that Saul Canelo Alvarez and Floyd Mayweather Jr. previously had before him. It was thought that Gennady Golovkin would be the one that would take the September date for himself once Canelo vacated the date. Canelo reportedly pulled out of the September 14 date, because he didn’t have a suitable opponent that would bring in a lot of interest for his next fight.

Canelo wanted to fight Sergey Kovalev, but he couldn’t put that fight together for that date. So, the still inexperienced Munguia takes the September 14 date, which falls on the Mexican Independence day weekend. Munguia’s opponent 30-year-old Allotey is a fringe contender, who has lost in the three times he attempted to fight better opposition during his career.

Allotey is a good showcase opponent for Munguia

Allotey has defeats to these three fighters: Charles Manyuchi, Patrick Teixeira and Kanat Islam. Those are decent guys, but far from elite level junior middleweights. But this fight is more about keeping Munguia as the WBO 154 pound champion, because he almost lost his last fight against Dennis Hogan last April. That fight showed that Munguia can’t be trusted being matched against guys that bring anything to the table, given his poor defensive skill and his below average hand speed. Munguia can’t be thrown into the ring with the top fighters at 154 like Jermell Charlo, Jarrett Hurd, Julian Williams, Erislandy Lara or Tony Harrison without him potentially losing his WBO junior middleweight title.

Allotey’s wins as a pro have been against second tier no name fighters in record padding fights. He’s beaten the guys that he was supposed to beat, but come up short when he’s been matched against world level fringe contenders in Islam, Teixeira and Manyuchi.

Jaime Munguia had a lot of options

Munguia was being mentioned previously as options for Canelo Alvarez and Golovkin. Neither of those fighters went for the fight, perhaps fearful of the backlash they would get. GGG has been ordered to fight IBF mandatory Sergiy Derevyanchenko for the vacant International Boxing Federation middleweight title that was recently stripped from Canelo.

As for Canelo, he’s said to be waiting on the outside of the August 24 fight between WBO 175 pound champion Sergey Kovalev and Anthony Yarde. Canelo wants to fight Kovalev, as long as he wins that fight.

Most recently, Munguia, 22, was in negotiations with former two division world champion Jessie Vargas, but those two were unable to come an agreement. Vargas (29-2-2, 11 KOs) is an option for Munguia later this year.  Dennis Hogan was also being mentioned for Munguia to fight in a rematch, but he chose instead to face Erickson Lubin next.

Munguia is arguably too young and underdeveloped to be a world champion right now. That’s the entire problem that his promoters at Golden Boy Promotions have with him. He beat a welterweight in Sadam Ali by a fourth round knockout to win the World Boxing Organization 154 pound title in May of 2018. The only reason Sadam had the WBO title is because he beat an injured Miguel Cotto by a 12 round decision in December 2017. Had Cotto been healthy, Sadam wouldn’t have stood a chance.

In Sadam’s first defense, he lost the belt to the much bigger Munguia. The size and power difference between the two fighters was shocking. Since winning the WBO belt, Munguia has successfully defended it four times against these fighters: Dennis Hogan, Takeshi Inoue, Brandon Cook and Liam Smith. Of those guys, Smith and Hogan had talent, but Munguia was able to use his size to get the better of him. That’s the thing. Munguia is essentially a big middleweight, who melts down to make weight for the 154 pound division. He can still do that due to his youth, but obviously that’s not going to be possible for too much longer.

When Munguia rehydrates, he’s said to balloon up to 175 pounds, which is an insane amount of weight or a junior middleweight to be weighing for a fight. That’s a light heavyweight. Munguia is doing what Julio Cesar Chavez Jr. used to do in dehydrating to fight in a weight class well below his body size and frame. The only question is will Munguia’s career go down the tubes once he’s no longer able to make the 154 pound limit? There’s a good argument that says it will. Munguia doesn’t match up with any of the top middleweights right now, and he who knows how long he’ll be able to make 160. He might end up at 168 or 175 when he finishes filling out.

It’s got to be a tough pill for lightweight Ryan Garcia (18-0, 15 KOs) to find himself fighting on the co-feature bout on the Munguia-Allotey card on September 14. Although Garcia is fighting on a great fight date that will ensure a lot of visibility, he’s not in the main event. Garcia recently spoke out on social media how he wanted to be a headliner on his own card against Romero Duno or journeyman Juan Antonio Rodriguez, but that’s not happening.

Garcia’s opponent for the September 14th date, Avery Sparrow (10-1, 3 KOs), is not well known enough by casual boxing fans to have him fighting in the headliner fight on the card. It’s nice that Ryan has a massive amount of followers on social media, but it’s unclear whether they would be willing to come out to see him fight. Munguia is clearly the more established fighter, given that he’s a world champion at 154 right now. Ryan Garcia may not ever progress beyond being a fringe contender at lightweight. He’s a lot of teenage boxing fans, but that doesn’t translate to him having true world class skills that would enable him to beat the top lightweights right now.

Golden Boy is being careful with how they’re matching Ryan right now with them putting him in with the weak punching 25-year-old Sparrow. This isn’t a guy that is threat to knocking out Ryan, and that’s the key. Being the A-side, Garcia has a good shot of still winning, even if Sparrow gives him major headaches. On the positive side; at least Ryan doesn’t have to worry about being potentially knocked out by Sparrow like he would if he fought a powerful lightweight.