Andre Ward says Kovalev should cash out with Canelo fight 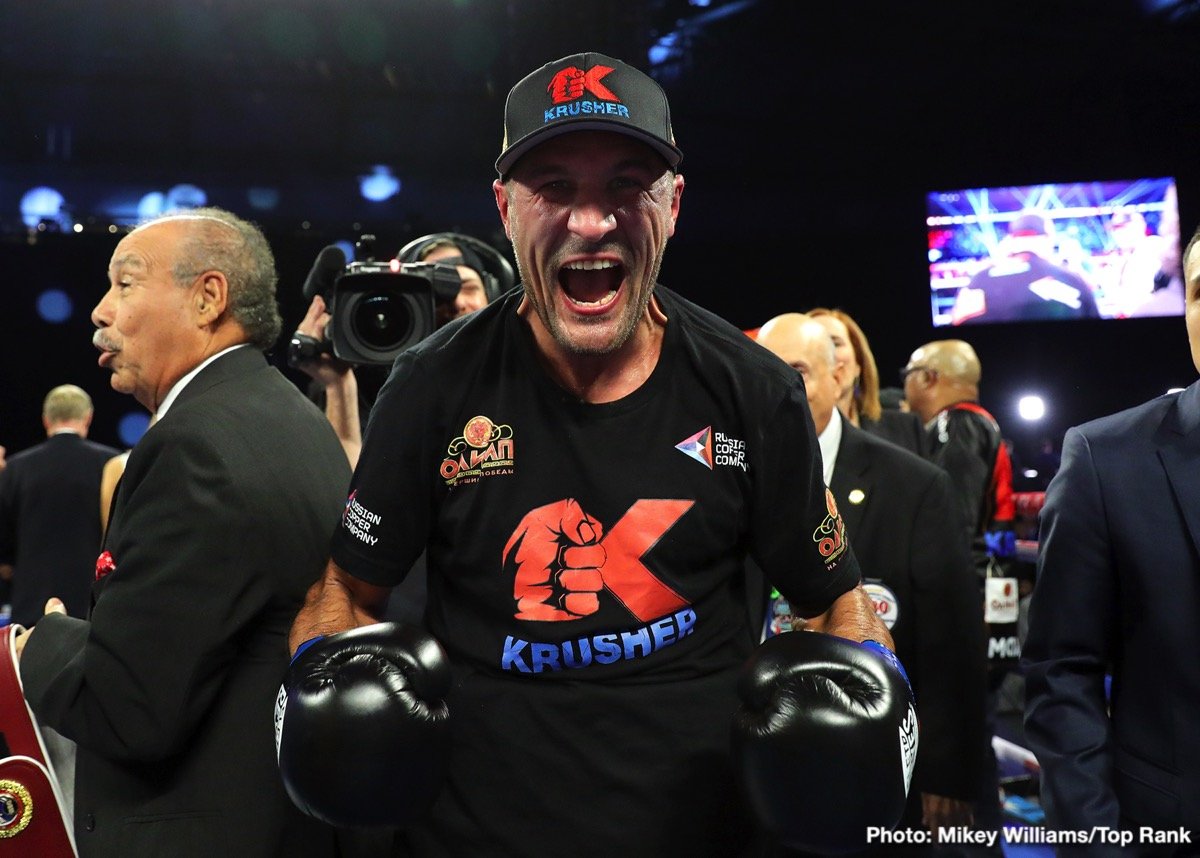 By Allan Fox: Andre ‘SOG’ Ward was mildly impressed with WBO light heavyweight champion Sergey Kovalev‘s performance in beating Anthony Yarde by an 11th round knockout last Saturday night. Ward saw that Kovalev struggled with the body shots he was getting hit with in the eighth, and he was falling apart in their fight.

Ward wants to see Kovalev to take advantage of the cash out opportunity he has against Saul Canelo Alvarez instead of taking on the dangerous champions at 175.

It was a controversial stoppage, however, because Ward appeared to hit Kovalev with three consecutive low blows. The referee Tony Weeks then jumped in while Kovalev was doubled over in pain. In the replay, the three punches from Ward appeared to be low.

In the 8th, Yarde came close to knocking him out. If the round had a little more time, Yarde would have pulled off the Coupe de grace and got Kovalev out of there.

Kovalev stopped Yarde in the 11th round on ESPN+ from the Traktor Sport Palace, in Chelyabinsk, Russia. Sergey was ahead on all three of the judges’ scorecards at the time of the stoppage by the following scores: 97-94, 98-92 and 96-93. Boxing News 24 had Kovalev up 98-92 at the time of the fight was halted in round 11.

Former two division world champion Ward says he’d like to see Kovalev “cash out” now, even though he admits that he’s still got a lot left in the tank at 36. Ward thinks it’s a bad idea for Kovalev to fight any of the other light heavyweight champions in the division, because those would be tough fights. He can make more money fighting Canelo Alvarez, says Ward.

Ward: Kovalev should cash out with Canelo fight

“He’s a fighter who still has a lot left in the tank, but what does that mean?” said Ward to ESPN at Top Rank. “How much does he have left in the tank? But he showed again he does not do well when he gets hit to the body, and somebody presses him, and is not enamored with the power and can take the power.

So I think he’s in that tricky spot in his career where you have a cash out situation [Canelo Alvarez], meaning a big fight where you can say, ‘hey, I’ve got enough in the bank to walk away.’ You should take that. Rumor has it that it’s Canelo Alvarez,” said Ward.

Kovalev has the boxing skills, mobility and power to beat a lot of the contenders in the light heavyweight division. There’s a small handful of guys that would give Kovalev problems, and possibly beat him. Ward doesn’t think it’s a good idea for Kovalev to fight any of the young lions. IBF champion Artur Beterbiev, 34, and WBC champion Oleksandr Gvozdyk, 32, aren’t too far away from Kovalev in the age department. Ward says it would take 4 fights for Kovalev to equal the money he would get fighting Canelo Alvarez. If Kovalev was dominating the division, and looking infallible, he could hang in there and take 4 fights. He’s too unpredictable now for him to take a bunch of soft fights rather than a cash out against Canelo.

“I probably wouldn’t tussle with the young lions at 175,” said Ward. “I would do away with the notion of unifying . He’s got to fight four times to make the Canelo money,” said Ward about Kovalev. “So I’m going to the low hanging fruit, the biggest fruit on the tree, which is Canelo Alvarez. See what happens in that fight, and make a decision about your career. But he’s starting to age before our eyes.

He’s getting into dangerous territory at age 36-years-old,” said Ward. “Yarde was a punch or two away from realizing his dream, and winning a title on the road, and shutting a lot of people up; namely me, because I didn’t think he’d be around that long, and I didn’t think he’d pull it off. He got close, but he wasn’t able to pull it off,” said Ward.

Kovalev is getting to the age where he to take chances with risky fights. If Kovalev doesn’t get the fight against Canelo, he’s not just going to retire rather than fighting the Beterbiev-Gvozdyk winner. Ward retired without fighting those two or Dmitry Bivol. He should have fought all three of them before retiring, but he didn’t.

“At 36-years-old, we all expected him to win this fight,” said Tim Bradley to ESPN at Top Rank Boxing about Kovalev. “Everything was lined up for Kovalev to win this fight, but Yarde, we don’t know about Yarde. We had a lot of questions. I think Yarde answered a lot of questions last night. He showed that he can hang with Kovalev. And, he does have a skill-set, but at the same time, he doesn’t have the conditioning, you know, and that comes with experience. He found the key for a little while, but he wasn’t able to sustain that pace, and go that extra mile, and get in close, and bang him down to the body,” said Bradley.

Yarde is likely going to continue to have conditioning problems moving forward, because he doesn’t spar.  Further, Yarde has been getting matched against weak opposition that he’s been able to knockout with ease. That kind of match-making will likely continue into the future for Yarde, and that’s going to keep him from improving his stamina. If he’s knocking guys out within four to five rounds each time he fights, then his conditioning won’t improve. What Yarde’s promoter needs to do is start matching him against solid contenders that he’ll have to battle to beat. Jean Pascal was matched tough on the way up, and he’s had a solid career. Yarde is the opposite of Pascal when it comes to his match-making.

Yarde can grow from this loss to Kovalev

“Ultimately, I think he can grow from this,” said Bradley. “I think he can move forward with his career. I think he should be happy with his performance, even though he lost. He comes back to this level. I think he can possibly win a world championship. Yarde, one thing he has to do, he needs to get his own identity, you know? Which trainer or which fighter is he going to study with? He needs to get his own identity, and get comfortable with his skill-set. His trainer needs to close his mouth a little bit, and humble himself a little bit more, and actually do some serious training, some real training, and get him some real sparring,” said Bradley.

Yarde’s situation can go one of three ways: A. He’ll improve with tough matching. B. He’ll stay the same with poor stamina and bad match-making. C. Yarde will quickly go downhill, and never be the same again.

To grow from the loss to Kovalev, Yarde will need to be matched against good opponents. That might not ever happen.