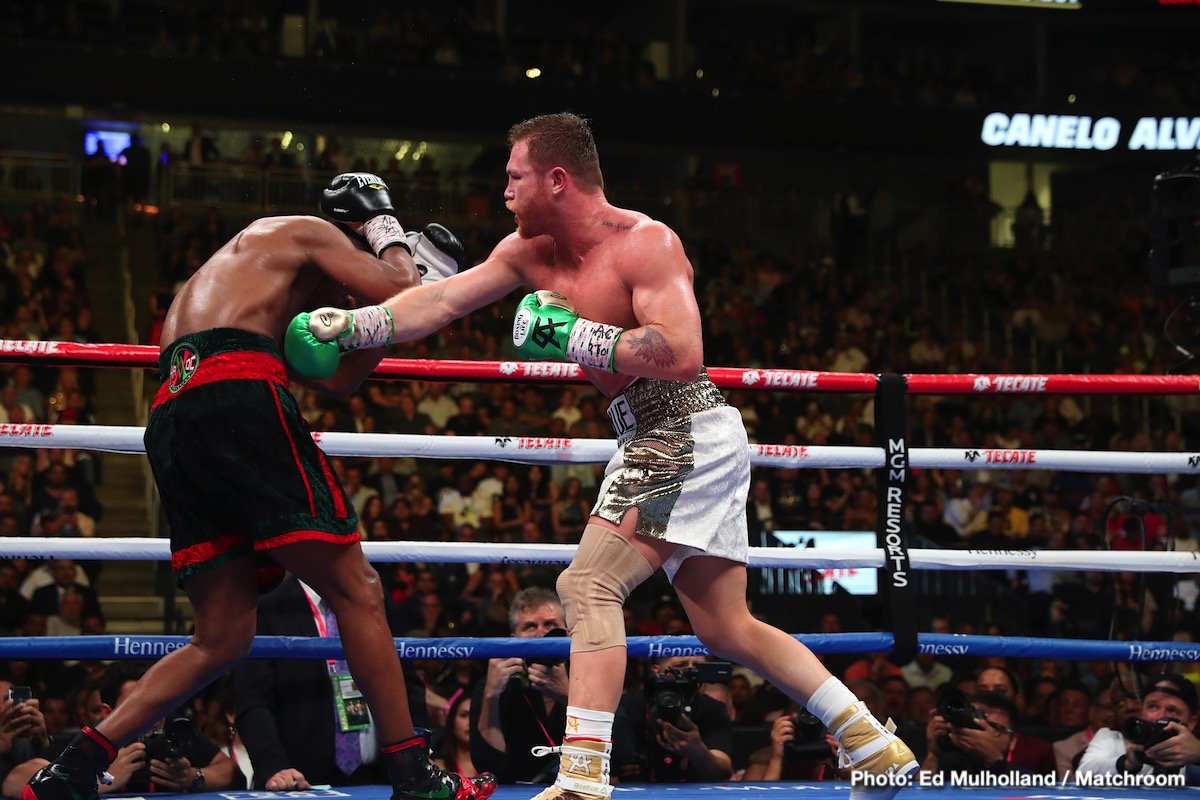 By Sean Jones: Sergey Kovalev dodged a shark in the water by stopping Anthony Yarde in the 11th round last Saturday night to put himself in position to face Canelo Alvarez in November. Fighting in front of his hometown fans in Chelyabinsk, Russia, WBO light heavyweight champion Kovalev came within a whisper of getting stopped in the 8th round by the young 28-year-old Yarde (18-1, 17 KOs).

Canelo has to have liked what he saw in Kovalev struggling to beat an inexperienced slugger in Yarde. Kovalev wasn’t even pressed to great extent by Yarde, and yet he still had difficulties winning.

Kovalev (34-3-1, 29 KOs) just narrowly averted disaster after taking some some massive head shots from Yarde in the 8th. Had the fight taken place in the UK, the referee might have waived it off. It was fortunate for Kovalev that the fight took place in his backyard in Russia, and the referee used patience after he was repeatedly staggered by blows from Yarde in the eighth.

The hard part for Saul Alvarez will be for him to move up two divisions to face Kovalev at 175 for his best. Although Canelo recently won the WBA ‘regular’ super middleweight title last December in beating Rocky Fielding, he wasn’t facing a quality fighter. Fielding was the weak link among the champions a 168 at the time. The toughest champion, WBA Super World 168-lb. belt holder, Callum Smith, was ignored by Canelo.

Saul Alvarez swerved Callum, and picked the easy option in Fielding, who he stopped in the 4th round. You can argue that Canelo didn’t win a true world title at 168, because Callum holds the real WBA belt. Fielding’s minor belt was more of an interim/temporary strap, not a true title. Canelo would have been better off going after Callum, IBF champion Rob Plant or dare I say, WBO belt holder Billy Joe Saunders.

It doesn’t matter how many division titles Canelo has won up to this date. Only the hardcore boxing fans career about that stuff. The casual fans will get sucked into a Canelo vs. Kovalev fight based on the hype that will go into the build up.

The way that the 29-year-old Canelo only fights in brief spurts, he’s not going to knockout Kovalev with that approach. Canelo’s stamina problems are going to keep him from putting together enough shots to knock Kovalev out unless he tires him out with wrestling or hits him with low blows like Andre Ward did. The 5’8″ Canelo’s lack of height, reach and his poor stamina will make it hard for him to stop Kovalev. Yarde, 6’0″, had equal size going for him against the 6-foot Kovalev last Saturday. Yarde didn’t have to put on a lot of weight to match-up with Kovalev the way Canelo will need to do.

Canelo used a rehydration clause to beat his last opponent Daniel Jacobs, and it’s unclear if he’ll try and pressure Kovalev to agree to one. Given that Canelo will be the A-side, he could give Kovalev a take it or leave it offer.

Kovalev either agrees to the rehydration clause or he doesn’t get the fight, period. Hopefully, Canelo doesn’t insist on a rehyration clause, because that would cheapen his win. It would already look bad that Canelo isn’t going to after one of the other light heavyweight champions Artur Beterbiev, Dmitry Bivol or Oleksandr Gvozdyk. Those guys are still in their prime, and not showing signs of going downhill like Kovalev.

All systems are go now for the 36-year-old Kovalev to defend his WBO 175-lb title against the Golden Boy Promotions hero Canelo in November. Kovalev did his part in beating back the threat of Yarde, and now it’s up to Canelo to take the fight. If Canelo changes his mind, then Kovalev says he wants to fight a unification match. It would be a disaster for Kovalev if Canelo changes his mind about wanting to fight him at 175. That would leave Kovalev in the position where he would need to fight the winner of the Beterbiev vs. Gvozdyk fight or face Dmitry Bivol.

Those would be good fights for the boxing fans, but they wouldn’t be huge affairs. Fighting Canelo would be much bigger deal for Kovalev than fighting a unification match with one of the other 175-lb champions. The chances of success for Kovalev would be low, and might be better off making simple title defenses.

His co-promoters at Top Rank would relish the idea of seeing him face champions Artur Beterbiev, Oleksandr Gvozdyk or Dmitry Bivol in a unification fight. They would even go for seeing Kovalevv fight former WBO super middleweight champion Gilberto ‘Zurdo’ Ramirez next. Top Rank promotes Gilberto along with Gvozdyk and Beterbiev. It’s all good for the promotional company if Kovalev faces one of them.

The money for Kovalev is to face Canelo rather than facing one of the other champions at 175. Kovalev can make over $10 million+ fighting Canelo, and possibly more. He’d make a lot less fighting a unification against the likes of Beterbiev, Bivol or Gvozdyk. Those are all good fighters, but they’ve not been involved in enough fights against elite level opposition to make them into stars. What also hurts them is they’re not super busy the way fighters need to be when they’re trying to turn into a star in a hurry.

Gennady Golovkin made a name for himself by fighting 3-4 times a year from 2012, and picked up a following quickly. Beterbiev, Bivol and Gvozdyk aren’t doing that, and they likely won’t. Kovalev will gain a lot more fighting Canelo than he will anyone else in the sport. The only thing that could rival a fight against Canelo would be if Kovalev moved up to heavyweight, and took on former IBF/WBA/WBO champion Anthony Joshua. That’s not going to happen in this lifetime.

Kovalev’s dreams of fighting Canelo almost evaporated in 8th round

Yarde has his 15 minutes of fame in hurting Kovalev in the eighth round, and nearly having him out. The fame was fleeting unfortunately for Yarde, as he ran out of gas, and took punishment from Kovaelev until getting stopped in the 11th.

It’s a little surprising that all it took for Kovalev to KO Yarde was to hit him with a jab, but he was tired at that point. Some boxing fans think Yarde quit by not getting back up. It was clear that Yarde was caught with a shot that dropped him, but it looked like it was a flash knockdown.

It didn’t look look like a punch that was hard enough to stop the British fighter. Who knows what was going through the mind of Yarde at that point in the fight? He’d taken a lot of punishment in the 10th round, and he’d eaten a lot of rapid fire blows from Kovalev in the 11th as well.

The jabs that Kovalev hit Yarde with with to the head and body did damage, as he was coming forward into the shots much of the time. Yarde took a lot of Kovalev’s jabs well, but by the 10th round, he was getting hurt by them.

Yarde’s trainer left him in there too long

His trainer Tunde Ajayi could have arguably pulled him out of the fight. Tunde obviously believed that Yarde still had a chance to turn things around up until the point where Kovalev knocked his lights out in the 11th round. His belief was fueled by the fact that Yarde was still dangerous in the 11th, and landing hard shots. Even in an exhausted state, Yarde’s power was still as good as it was earlier in the fight. He wasn’t able to get to Kovalev to put his shots together.

With the defeat, Yarde needs to get more experience before he looks to fight for another world title. His promoter put him a little early in his career without matching him against good opposition along the way. Yarde needs to be brought along the right way now by having him fight good contenders before he takes on one of the champions.

Here’s a short list of contenders Yarde should face before challenging for another world title: