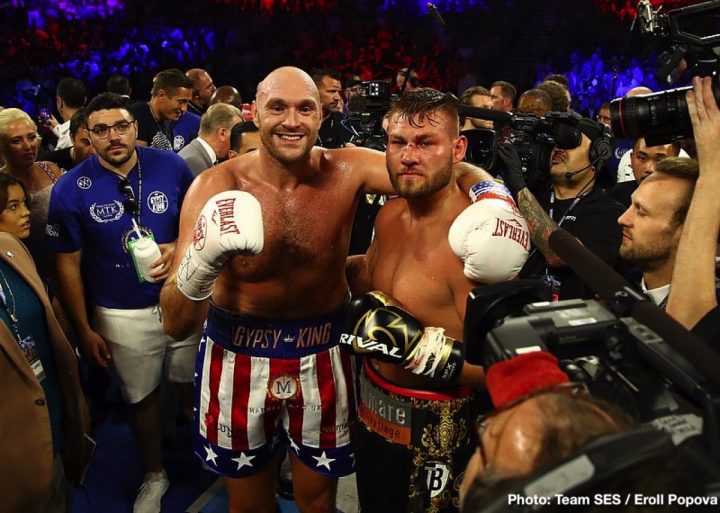 By Kenneth Friedman: Promoter Bob Arum says Tyson Fury will be fighting next on either September 7th or 21st in New York at Madison Square Garden, according to Mike Coppinger @theathleticBox. Arum will be meeting with MTK Global reps to talk about Fury’s opponent for September.

The opponent that Arum wants for Fury is WBC heavyweight champion Deontay Wilder, but that’s not likely. Arum had planned on making the rematch between Wilder and Fury in early 2020, but now he wants it to take place  in 2019. Wilder’s team hasn’t indicated whether they’ll accommodate Arum by making the rematch next. If it were up to Wilder, he’d likely take the fight, but he’s not the one calling the shots. Wilder is expected to face Luis Ortiz in a rematch next. Their fight last year was a real barn-burner. The fans are eager to see those two face each other again.

Lineal heavyweight champion Fury(28-0-1, 20 KOs) is coming off of a second round knockout win over Tom Schwarz on June 15 in Las Vegas, Nevada. It wasn’t much of a fight, but it wasn’t meant to be. Top Rank Boxing promotion wanted to introduce Fury, 30, to the U.S casual fans to get them ready to see him against Wilder in early 2020.

Fury needs a better opponent for his September fight

It’s important for Top Rank to match Fury against a good heavyweight for his next fight in September. Schwarz looked really poor in offering up very little resistance before getting stopped in the second round. The fight sold a little over 5,000 tickets, which was well below the reported 9,000+ tickets. American boxing fans want to see quality match-making, and Fury vs. Schwarz came up short of the mark in that department.

Arum hasn’t dropped any hints about who Fury will be fighting next, but Bryant Jennings is likely option. Matchroom Boxing promoter Eddie Hearn said last week that Top Rank won’t put Fury in with a quality opponent. There’s a lot of money on the line for Fury with his rematch with Wilder next year. Top Rank is paying Fury well, and they don’t want to risk losing out on the revenue. Arum is predicting over 4 million buys for the Wilder vs. Fury rematch next year.

The next move Arum plans on making is to travel to Japan to sit down with WBA bantamweight champion Naoya Inoue to negotiate a co-promotional deal, according to Theathleticbox. The exciting Inoue (18-0, 16 KOs) has captured world titles in three weight classes during his seven-year pro career, and he’s expected to win the World Boxing Super Series bantamweight tournament this year when he faces Nonito Donaire in the final. This would be a huge addition to Top Rank if they can ink the young 26-year-old Inoue. The bantamweight isn’t a popular one with American boxing fans, but Inoue is a special type of talent.