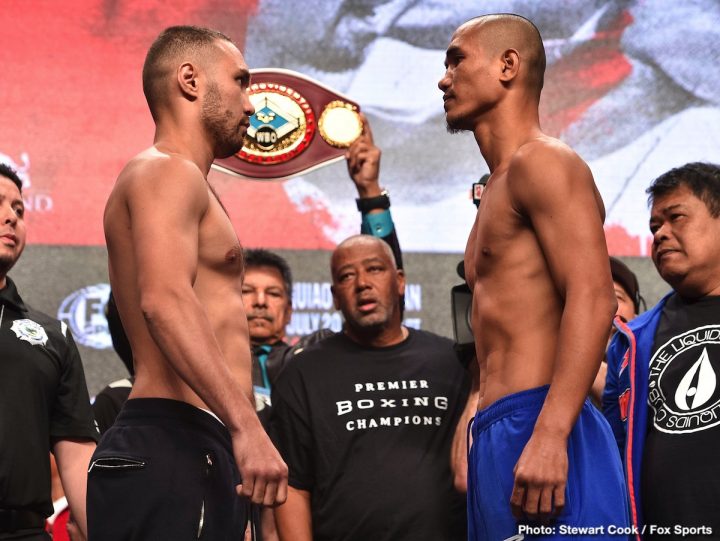 By Kenneth Friedman: Former IBF light welterweight champion Sergey Lipinets will be facing replacement opponent Jayar Inson this Saturday night in a 10 round fight on Fox Sports pay-per-view at the MGM Grand Garden in Las Vegas, Nevada. Lipinets’ originally scheduled opponent John Molina Jr. pulled out of the fight on Friday due to a back injury.

Lipinets vs Inson will be battling it out on the undercard of Manny Pacquiao vs. Keith ‘One Time’ Thurman on Premier Boxing Champions on Fox Sports PPV.

Molina Jr. (30-8, 24 KOs) has lost two out of his last three fights, including his last one against Omar Figueroa Jr. Having Molina drop out of the Lipinets fight hurts the card somewhat, but it wasn’t a great fight on paper. Lipinets should be fighting top welterweights, and the 36-year-old Molina doesn’t fit that role.

Inson was already fighting on Pacquiao vs. Thurman undercard

Inson, 28, lost his last fight to Johnathan Steele (9-4-1, 6 KOs) by an eight round split decision last January in Las Vegas. Losing to a fighter like Steele shows what kind of talent Inson is. Lipinets is obviously not being put in with a solid fighter, but you can’t expect much on one day’s notice. Lipinets’ handlers weren’t going to throw him in the deep water against someone like Danny Garcia, Josesito Lopez or Jessie Vargas with just one day to prepare for the fight.

The southpaw Inson was previously scheduled to fight on the Pacquiao-Thurman card against Mahonri Montes in a fight scheduled for eight rounds. That match-up was an off-TV bout on the undercard.

Former IBF light welterweight champion Lipinets (15-1, 11 KOs) has turned his career around following his 12 round unanimous decision loss to Mikey Garcia last year in March 2018. That fight was a lot closer than the scores handed down by the three judges. They scored it 116-111, 117-110 and 117-110.

Lipinets, 30, landed the harder shots throughout the contest, but the judges focused on Mikey’s volume punching.  Since that loss, Lipinets has rebounded with wins over Erick Bone and Lamont Peterson at welterweight. Lipinets is a better fighter at 147 than he was fighting at 140. Lipinets stopped Peterson in the tenth round last March in Oxon Hill, Maryland. In his fight before that, Lipinets defeated Bone by a 10 round majority decision last August.