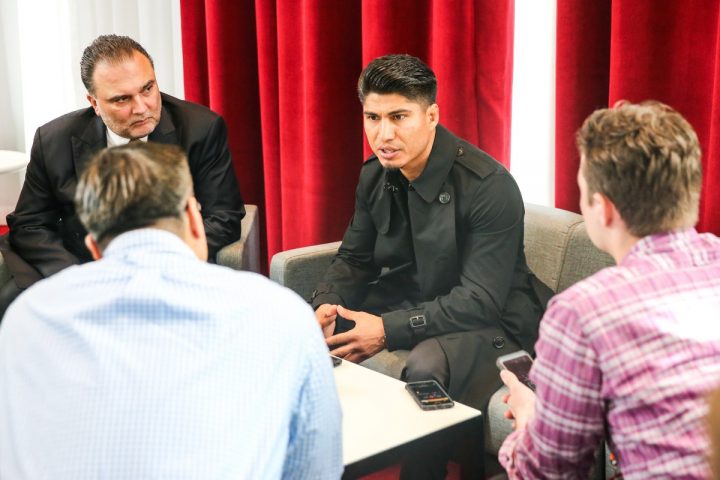 By Aragon Garcia: Mikey Garcia is in talks with Matchroom Boxing USA promoter Eddie Hearn about a multi-fight deal that could bring the 31-year-old American to DAZN, according to Mike Coppinger.  Depending on how much DAZN is willing to pay the former four division world champion Garcia (39-1, 30 KOs), this could be a great deal for him financially.

Mikey is coming off of a lackluster one-sided 12 round unanimous decision defeat at the hands of IBF welterweight champion Errol ‘The Truth’ Spence Jr. last March in Arlington, Texas. The fight was shown on Fox Sports pay-per-view, and it brought in excellent PPV numbers, thanks to Mikey’s hard work in attracting interest in the fight with his many interviews.

Garcia lacked the size to compete on an even playing field with Spence, who looked like a junior middleweight after he rehydrated for the fight. Mikey should have asked for a catch-weight, and a rehydration limit to keep Spence from gaining back so much weight.

Signing Mikey Garcia would be a great addition to Matchroom & DAZN

Adding Mikey to the DAZN and Matchroom Boxing USA team would be a huge positive for them. Hearn could match Mikey against the winner of this month’s unification fight between WBO light welterweight champion Maurice Hooker and WBC champion Jose Carlos Ramirez. A win for Mikey over the Hooker vs. Ramirez winner would make him a two-time 140 pound champion.

“Sources: Mikey Garcia and Eddie Hearn are engaged in advanced talks on a multi-fight deal that would bring the former four-division champion exclusively to DAZN. No deal is imminent at this time, but both sides are hopeful an agreement can be reached in the coming weeks,” said @MikeCoppinger.

Hearn can also match Mikey Garcia up against the winner of the World Boxing Super Series 140 pound division. WBA light welterweight champion Regis Prograis and IBF champion Josh Taylor will be fighting in the final of the WBSS 140 lb. tourney. Mikey could face the winner of the Prograis-Taylor fight in a match that would make big waves in the boxing world.

Mikey was recently being mentioned as an opponent for former two division world champion Danny Garcia. The timing for a fight between Mikey and Danny is bad right now. With Danny losing to Shawn Porter last year, and Mikey getting beat by Spence last March, it’s not a good time for a Danny vs. Mikey fight.

Leaving Premier Boxing Champions to sign with DAZN could close the door for Mikey for matches against Danny Garcia, Keith Thurman, Manny Pacquiao and Shawn Porter. It might also make it problamtic for Mikey to get a fight with Top Rank fighter Terence Crawford.


« LIVE STREAM: Whyte vs Rivas, Price vs Allen – Weigh In