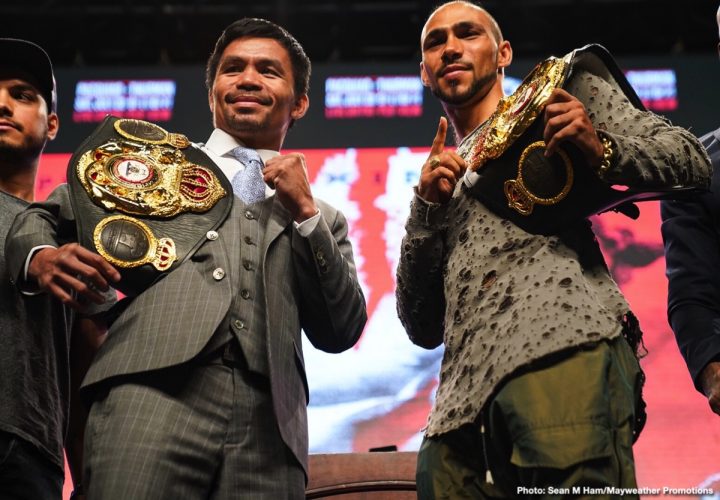 Also in attendance at the press conference and going face-to-face Wednesday were welterweights Omar “El Panterita” Figueroa and Yordenis Ugás, who meet in a 12-round WBC title eliminator, former champion Sergey Lipinets and John “The Gladiator” Molina Jr, who go toe-to-toe in a 10-round welterweight match, plus former bantamweight champions Luis “Pantera” Nery and Juan Carlos Payano, who meet in a 12-round bout. The pay-per-view begins at 9 p.m. ET/6 p.m. PT. 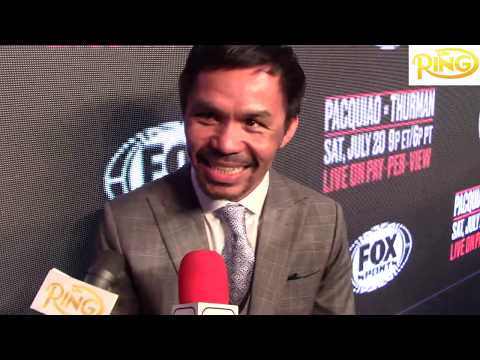 Here’s what the fighters had to say on Wednesday. 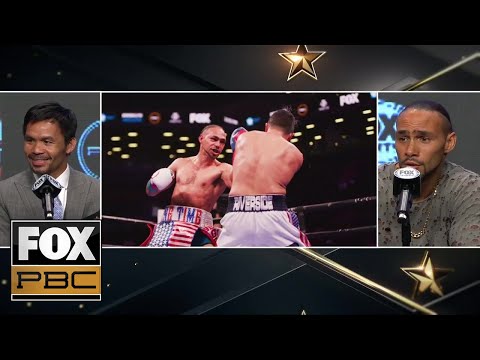 “For me nothing is personal. I have to do my job and there is nothing personal with him. Our job is to fight and he has to prove something, and I have to prove something. That’s why I’m so motivated for this fight and this training camp. It’s also my first time fighting on FOX Sports Pay-Per-View, so I’m excited to fight on Saturday.

“I’m just always smiling no matter what Keith says. It’s easy to say things, but it’s not easy to do it in the ring. I’ve been in this sport longer than Keith Thurman, so my experience will be the difference.

“This is going to be an exciting fight and a once-in-a-lifetime fight. Like he has said, there is going to be a lot of action in the ring. I respect my opponent because we both believe we can give a good fight to the fans. That’s our first concern. The fans and the enjoyment of the fans.

“That’s Thurman’s style to talk a lot. Like I said, it gives me more motivation to focus, and it has helped me a lot leading up to this fight. 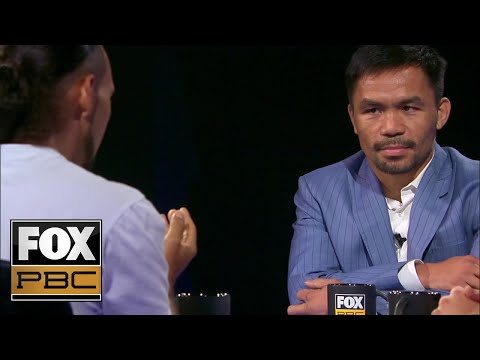 “I’m not predicting a knockout for this fight, but we did our best in this training camp. I’m focused and motivated, so we’ll see. I’ll do my best to make the fans happy.

“My feeling right now is happiness and excitement to prove that at the age of 40, I can still show my best.

“Boxing is my passion. I love to play basketball, but you are a team, you don’t know which people are shooting, you or your teammates. Boxing is you alone. When people are cheering for you, it is for you.

“We did our best in training and I believe we are physically ready, as well as spiritually ready. I expect a good fight so tune-in Saturday. The way Thurman spoke today, I hope he will live up to it on Saturday.” 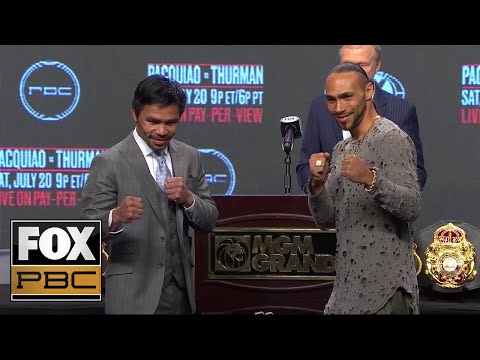 “Manny isn’t going to do anything. With the little ‘T-Rex’ arms. He’s about to get beat up. I get to punch a Senator in the face and he’s going to feel it. If he’s upset about it, he can do something about it Saturday night. It’s called swing, swing, swing baby.

“I’m a winner in life, and to bet on myself to win in the opening rounds, it makes me do what I said earlier, which is swing, swing, swing. You’ve got to swing to hit a home run. You can’t just sit there and pump fake all day. 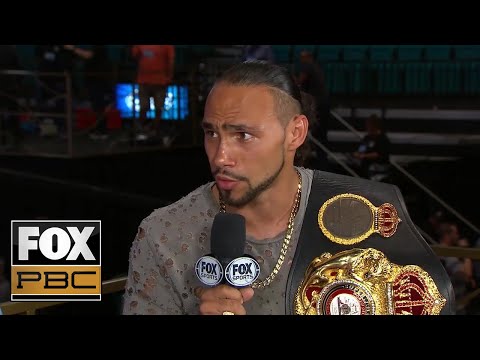 “It’s an honor to be here at MGM Grand. I’m truly looking forward to this fight. We’ve had a terrific, terrific training camp.

“I say I’m going to put him to sleep because I’ve got power. I want to remind the world of something. Something very simple: I’m Keith ‘One Time’ Thurman. I have the name for a reason. Not a short season.

“I feel like I’ve made boxing history. When I beat Danny Garcia, we were two undefeated welterweight champions. In boxing history, there haven’t been many times when WBA and the WBC was unified with two undefeated welterweights. But, I don’t think it’s enough to really solidify a legacy. So, I do need the victory to further my own personal legacy come Saturday night.

“This really is the outcome of an individual living out their dream. It all comes together on Saturday night.

“I’ve been saying it over and over again, don’t be surprised if Manny Pacquiao goes night-night.” 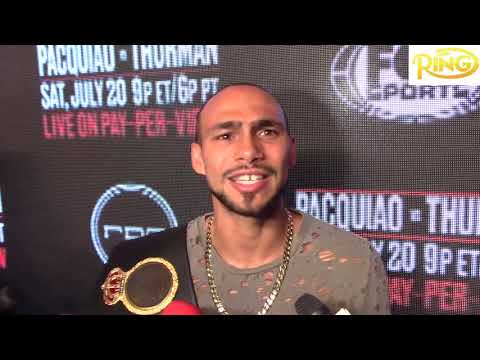 “I have never prepared better than I have for this fight and I am ready to prove that Saturday night.

“It means the world to me to be in this position, especially because of all of the injuries I’ve had and the setbacks. It’s my third fight in almost four years. I am just grateful for this opportunity.

“Everything is going well for me including in my last fight. There’s often something that happens, but thankfully this camp I have been completely healthy. We were very smart in camp. We were very careful. We sparred the rounds that felt like we needed to spar. I closed camp with 12 hard rounds and I haven’t been able to do that in a while because of injuries. It just feels good mentally and all around. I don’t think I have ever been in a better place.

“Fighting gets my juices flowing. I feel like I was born to fight. I have been doing this for 24 years now. This is what I live for.

“This camp I’ve felt great. I was healthy and I did exactly what I needed to do inside the ring as far as sparring and everything. I took care of my hands and my body. Mentally I’m at the best place I’ve ever been.

“My close people know that I’m taking this extremely serious. They see how I am in camp. I’ve been doing this for 24 years and it takes a toll on the body. For this fight, I’m healthy and everything is looking good. I’m probably on weight right now, and if not I still have more than enough time.

“If I stay healthy during the fight, it’s not going the distance.” 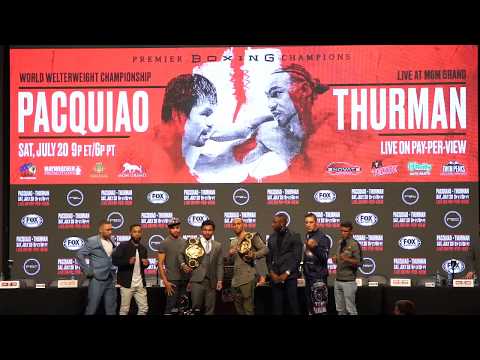 “I’m really happy to get a second opportunity to earn a world title shot. What happened against Shawn Porter is in the past and I’m only looking into the future, which is Saturday night.

“Omar Figueroa is a very strong fighter who throws a lot of punches. I believe his fighting style in combination with mine will make a very exciting fight.

“A win will put me back in contention for a world title shot, which is what I want. I see the fight as 50/50 but I am only focused on my fight, nothing beyond it.

“I predict that I will win. I’m going to give it all I’ve got. No matter If it goes the full 12 rounds, I am going to fight hard for every send.

“There are many other good Cuban fighters such as Erislandy Lara, Luis Ortiz and so on, but I feel as though I am the best. It’s up to me to prove it.

“I am focused on my fight right now but either Shawn Porter or Errol Spence Jr. has a good shot of winning and I would absolutely be ready to face either one.” 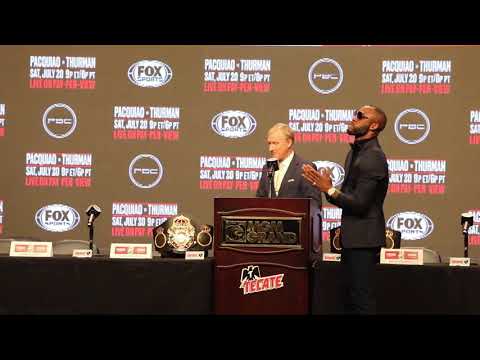 “I’m very happy and I’m excited that I have this opportunity to fight on a show like this. I’m one hundred percent prepared for this fight, and I believe John is ready to fight as well. So I know it’s going to end up being a great fight.

“If someone were to tell me two years ago to imagine myself on this stage, I would never believe it. But, I’m here now and I’m here to make a statement. Everyone is going to be happy to see this fight.

“We changed corners as you know. Joe is in my corner right now and I’m very excited. It motivates me and he gives me a new boxing game and teaches me things that I’ve never even thought about. When it comes to John Molina Jr., whatever he brings into the ring, we have an answer to. There’s not going to be any question marks.

“Well ironically, we started here in the U.S. first at Joe’s gym. Finally, we came full circle and I chose to go back to Joe.

“Joe Goossen made me a different fighter. My defense got way better. I’m punching in a way where I’m hurting people more and that’s just what Joe Goossen does.

“Making weight is all about discipline, what you eat, how you maintain your weight outside of the ring and that’s what we do. If you are a professional athlete that’s what you do. I’m still maintaining my life style. 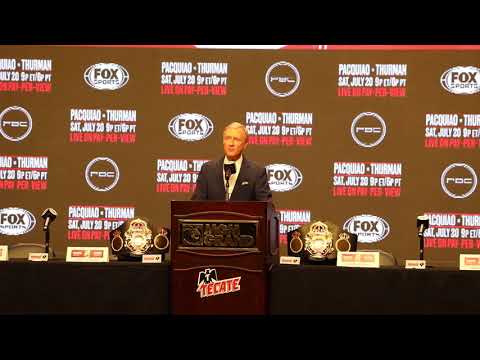 “It’s very special to be a part of this platform. I love what I do. I love putting on for all of the fans and Saturday night is going to be a great night of fights.

“This is my job. I have been here before a million times and now it’s time for me to do my job on Saturday. Lipinets has a style that excites me because of what I can do as well to make this a great fight. The fans are in for a treat.

“Lipinets is a tough guy and he he fared well against Mikey Garcia who’s one of the best, so he’s definitely a good fighter. I need to be sharp and use my experience to take advantage of him.

“I love the fact that the fans respect my craft and what I do. Because I put my everything into this fight game. Everything that I’ve ever earned and that I’ve grinded for it. This is why I give my all every time. 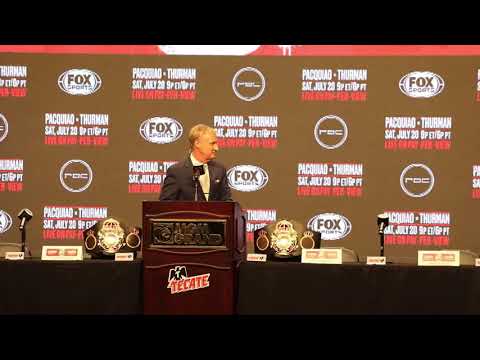 “I am very honored to be here especially with all of my Mexican fans and all of my fans from around the world. I am very pleased and thankful to be on such a great card with Manny Pacquiao and Keith Thurman.

“My strength and power comes from my heart. It will all be on display Saturday night.

“Being on this card means a lot. First I was on the Errol Spence vs. Mikey Garcia card, now its Manny Pacquiao vs Keith Thurman. I look forward to going after (WBC 118-pound champ) Nordine Oubaali, who has the title I used to hold. 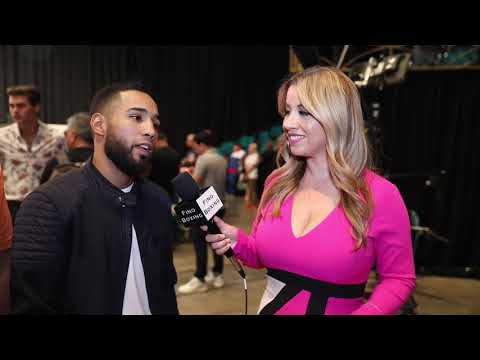 “I am very honored to be on this card. It is a very exciting card with both Pacquiao and Thurman, which will be a great fight. I am honored to be able to be fight for the chance to become world champion again.

“My goal is to become champion once again. I am very prepared and have worked extremely hard over the years for this chance.

“This is going to be a great fight for the fans and that’s what I’m all about. I have the skills and the determination to beat any fighter in the division. I have to show my improvement on Saturday.

“It is no secret that Nery is a power puncher, but it is not the first power puncher I have fought and it certainly won’t be the last. On Saturday night two warriors are going to get up there but only one is going to walk out victorious. I look forward to being the victorious one.”

Tickets for the event are on sale now and can be purchased online through AXS.com, charge by phone at 866-740-7711 or in person at any MGM Resorts International box office.


« Artur Beterbiev has signed contract for Oleksandr Gvozdyk for October 18