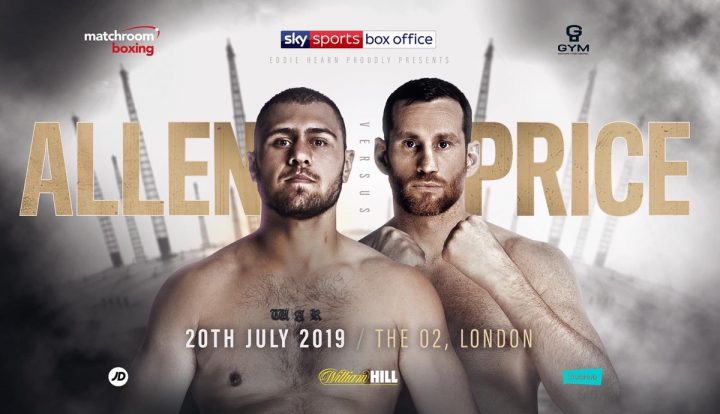 By Charles Brun: David Price views his upcoming July 20 fight against Dave Allen as a “world title” match, and he’s highly motivated to win due to what’s at stake for him. Former British and Commonwealth heavyweight champion Price (24-6, 19 KOs) sees the fight against the 27-year-old Allen (17-4-2, 14 KOs) as the biggest fight of his career, because he’s got so much to lose if he gets beaten.

The Price vs. Allen fight will be taking place on July 20 on the undercard of the heavyweight clash between Dillian Whyte and Oscar Rivas on Sky Box Office at the O2 Arena in London, England.

Price’s stamina is a concern

Price-Allen is expected to be over with quickly with Price getting knocked out. Allen has heavy hands, and he’s capable of fighting at a fast pace. Price can’t do that at this point in his career. For all intents and purposes, the 6’8″ Price is a three-round fighter at best.

After three rounds, he gasses out, and is at the mercy of his opponents. He used to have decent stamina earlier in his career, but not anymore. Price fades quickly in fights, and then he’s vulnerable to getting knocked out. Some boxing fans were worried about Price when he being interviewed following his win against Tom Little last December. Price was so out of breath that fans felt that he needed oxygen. He was still out of breath several minutes into the interview. Price was gasping for air.

If Price loses to Allen, it might time for him to retire. Boxing fans are already saying that Price should retire given his string of knockout losses to Sergey Kuzmin, Alexander Povetkin, Chrisian Hammer, Erkan Teper and Tony Thompson. Price is getting knocked out by fringe level heavyweights, and that’s a bad sign.

“This is massive, this is probably the biggest fight of my career,” Price said to skysports.com. “But this one to me is so big because of what is potentially on the other side that it’s like my world title fight.”

It’s unclear what Price is talking about when says of what is “potentially on the other side” for him. Is Price hoping for a fight against the likes of Anthony Joshua, Dillian Whyte, Oleksandr Usyk, Dereck Chisora, Michael Hunter, Andy Ruiz Jr. or Filip Hrgovic? It’s hard to imagine Price getting a fight against any of those heavyweights off the back of a win over domestic level fighter Allen. It depends on what Price sees as a big fight for him at this juncture of his career.

Perhaps a huge fight for Price is a bout against Usyk, Hunter or Hrgovic. For most boxing fans, they would view a fight between Price and Joshua, Ruiz Jr. or Whyte as a big fight. Matchroom Boxing promoter Eddie Hearn probably wouldn’t dare putting Price in with Joshua, Whyte or Usyk, due to the high potential of the fight winding up with a quick blowout win for those fighters. Hearn wouldn’t want to be left stammering while facing an angry mob of British fans.

Price calling this a “crossroads fight”

Price is calling this match a “crossroads fight”, but he’s not worried about that. He says he’s been in those type of fights before after losses.

Price has won his last two fights against Kash Ali and Tom Little. However, Price, 35, looked like he was close to getting stopped in the fifth round by Kash last March. Kash had Price on the precipice of being knocked out in the fifth round. He got sloppy and got caught big uppercut from Price that badly stunned him. Kash then tackled Price to the canvas, and bit him on the midsection.

The referee halted the fight once he realized that Price had been bit.  Although Price won the fight, the fact that he was so close to getting knocked out by a very average Kash showed how far gone he is. It was Price’s stamina that gave him problem. He gassed out so quickly after just four rounds, and he wasn’t even fighting hard. It looked like Price was intentionally fighting at a close pace so that he wouldn’t gas out, and yet he did anyway.

Allen is coming into the fight with Price off of a career best third round knockout win over former WBA heavyweight champion Lucas ‘Big Daddy’ Browne last April at the O2 Arena. Allen nailed the 40-year-old Browne with a body shot that dropped him to his knees. The fight was then stopped. But it’s difficult to get excited about Allen’s win over Browne (28-2, 24 KOs), because he was coming off of a controversial six round points decision win over journeyman Kamil Sokolowski (7-15-2, 3 KOs) last April.

Sokokowski, who isn’t a big puncher, dropped Browne in the second round, and dominated the remainder, but ended up losing by a 57-56 decision. Allen has won his last four fights with wins over Ariel Esteban Bracamonte, Samir Nebo and Nick Webb.

« Canelo Alvarez vs. Sergey Kovalev – time running out on negotiations